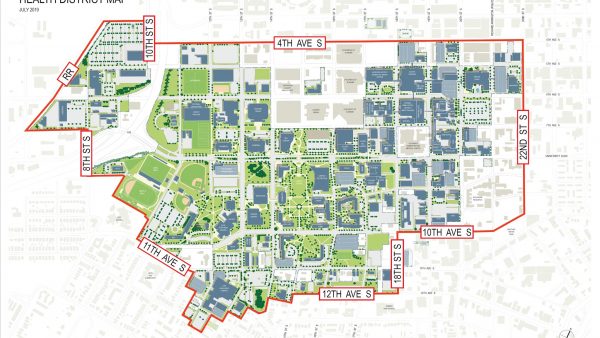 Birmingham's new "health district" includes most of UAB's campus and downtown medical facilities. A city ordinance passed Tuesday bans smoking on streets and other public places within the district.

The Birmingham City Council unanimously approved an ordinance Tuesday to ban smoking in a portion of downtown Birmingham. The designated “health district” includes much of UAB’s campus, Children’s Hospital of Alabama, Cooper Green Mercy Health Services, the Veterans Affairs Medical Center and the Jefferson County Department of Health. Under the new ordinance, smoking will be prohibited in all public places within the district, including city sidewalks, streets, bus stops and parks.

Officials with UAB, Children’s Hospital, Cooper Green, the Jefferson County Board of Health, Southern Research and the VA Medical Center requested the creation of the health district to “promote the health of their staff, patients, students, visitors and the public.”

During Tuesday’s public hearing before the city council, several doctors and students spoke in support of the ordinance. Dr. Susan Walley, pediatrician at UAB and Children’s Hospital, said most of the medical facilities and organizations within the new district already have “smoke-free” policies.

“So we felt this was really an opportunity to make the entire area smoke-free,” Walley said, “so that visitors, staff, patients could all have a smoke free environment to walk from building to building, to improve walkability and health.”

She said there is “no safe level” of exposure to second-hand smoke and that tobacco exposure is a leading cause of preventable death and disease in Alabama.

Officials with UAB, Jefferson County Department of Health, Children’s Hospital of Alabama and the Birmingham VA spoke in support of the new ordinance.

When council members asked about how the ban would be enforced, officials said supporting organizations would take on the responsibility to educate the public and remind people about the ordinance. Dr. Mark Wilson, health officer with the Jefferson County Department of Health, says the Birmingham Police Department and UAB campus police would have authority to issue fines to those who violate the ordinance. But Wilson says health organizations are more focused on education and providing resources to help people stop smoking.

No one spoke against the ordinance during Tuesday’s hearing, though some have objected to it on social media, saying the creation of the health district infringes on personal freedom. In response, Walley said the new ordinance is about protecting the public’s right to clean air.

“This is not anti-smoking,” she said. “[It] is promoting clean air and promoting having no second-hand smoke.”

Speaking in favor of the ordinance, Councilor Steven Hoyt said he hopes healthcare officials will continue to address other public health concerns, such as exposure to pollution in North Birmingham.

“If health is a concern of the hospital, then health anywhere, and the impediment of one’s quality of life should be a concern of all of us,” Hoyt said.

The new ordinance does not restrict smoking in moving vehicles and private residences. Property owners within the district, including hospitals, can create a designated outdoor smoking zone up to 200 square feet in size. The city’s current definition of “smoking,” established in a 2012 ordinance that banned smoking inside public places, does not include vaping or the use of e-cigarettes, but health officials said they hope to change that.

“I would very much like to come back to the city council soon with an amendment to the 2012 ordinance to include vaping and e-cigarettes, other nicotine containing products,” said Dr. Mark Wilson.

Officials with UAB said they will now work with other sponsoring organizations to develop an awareness campaign to educate the public about the new health district. The ordinance will go into effect December 1.