$21 Million Study Will Research Health Disparities in the Rural South 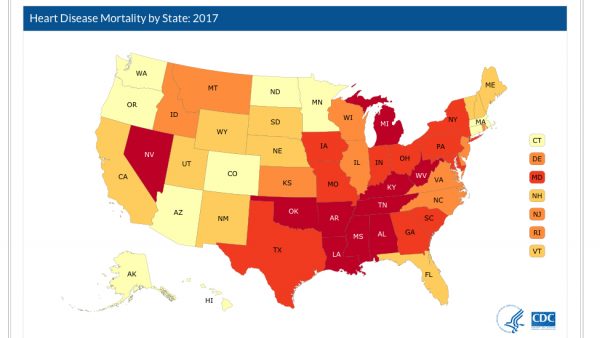 A graph by the Centers for Disease Control shows mortality rates from heart disease across the United States.

People who live in rural parts of the South are 51% more likely to die from heart disease than people who live in metropolitan areas outside the south, according to Suzanne Judd, a professor in the School of Public Health at the University of Alabama at Birmingham (UAB).

A new study funded by the National Institutes of Health will try to figure out what causes this disparity. The Risk Underlying Rural Areas Longitudinal (RURAL) Cohort Study includes researchers from 16 institutions across the country. UAB is one of the lead partners and will serve as the recruitment and retention center.

The RURAL project will study around 4,000 people who live in the rural South. Researchers are going to build a clinic on wheels that will house a full-sized CT scanner and travel to 10 counties across Alabama, Mississippi, Kentucky and Louisiana. Participants who enroll in the study will get a comprehensive health screening and genetic testing. They will also be interviewed about their environment and lifestyle choices.

The RURAL study is funded with $21.4 million from the NIH to last six years. In Alabama, research is likely to take place in Wilcox and Dallas counties.