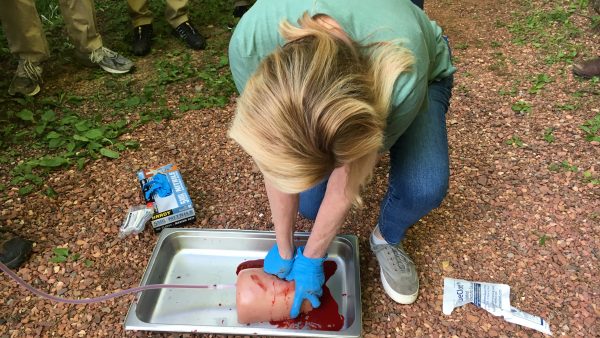 Recent mass shootings have prompted more debate around gun control, but they’ve also sparked interest in practical ways to keep people alive in those critical moments after a tragedy. Victims can die from uncontrolled bleeding in as little as five minutes. That’s often before trained responders arrive. But by teaching regular people to stop the bleeding, just as with CPR or the Heimlich maneuver, people can save lives. 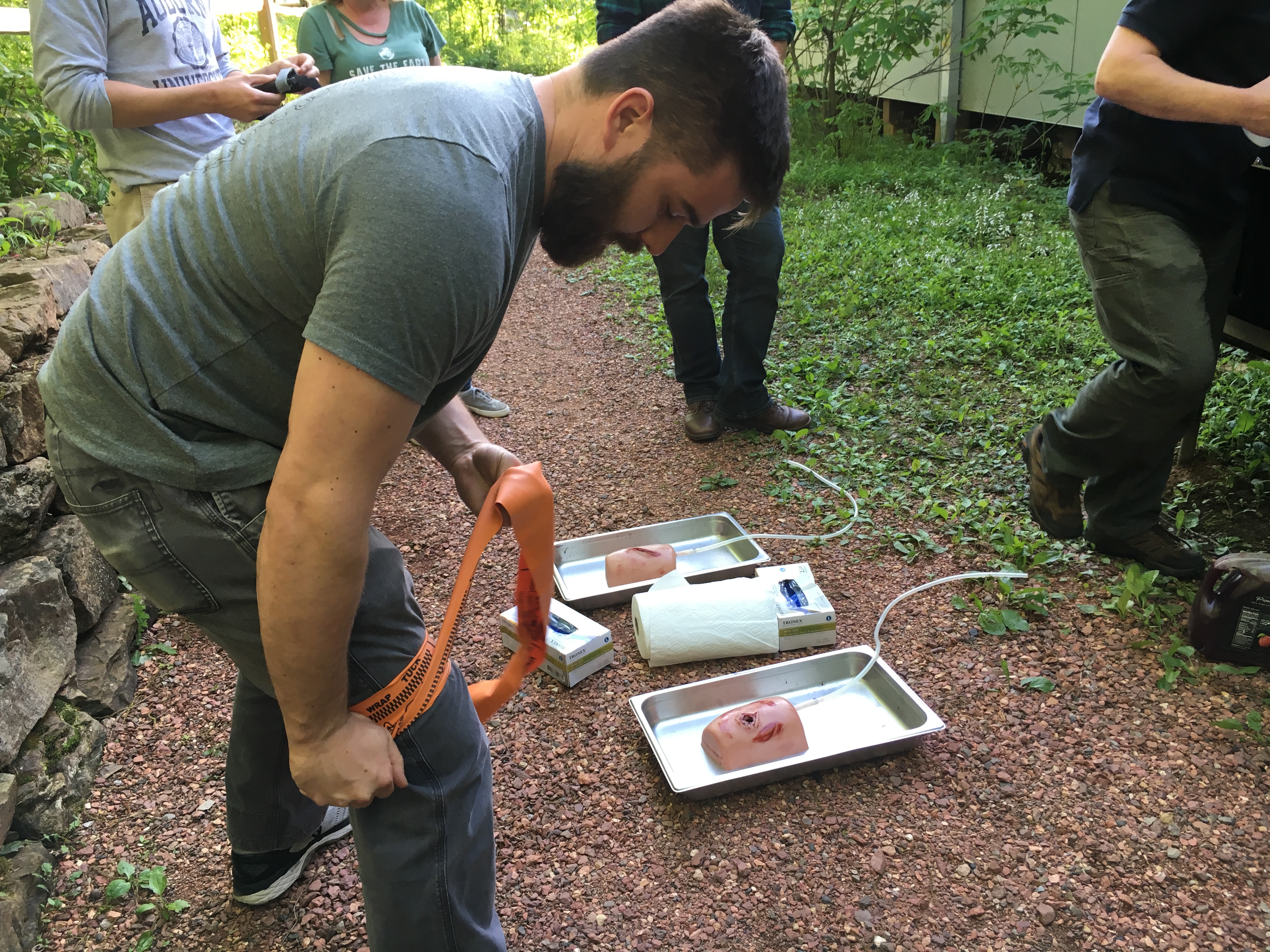 That’s why on a recent Saturday, there’s a gruesome-looking scene behind the Ruffner Mountain Nature Center. After practicing with tourniquets, a half-dozen students — first responders and regular people — stand over bleeding control kits and pans holding what look like bloody cuts of meat. But they’re actually simulated human thighs with different injuries. 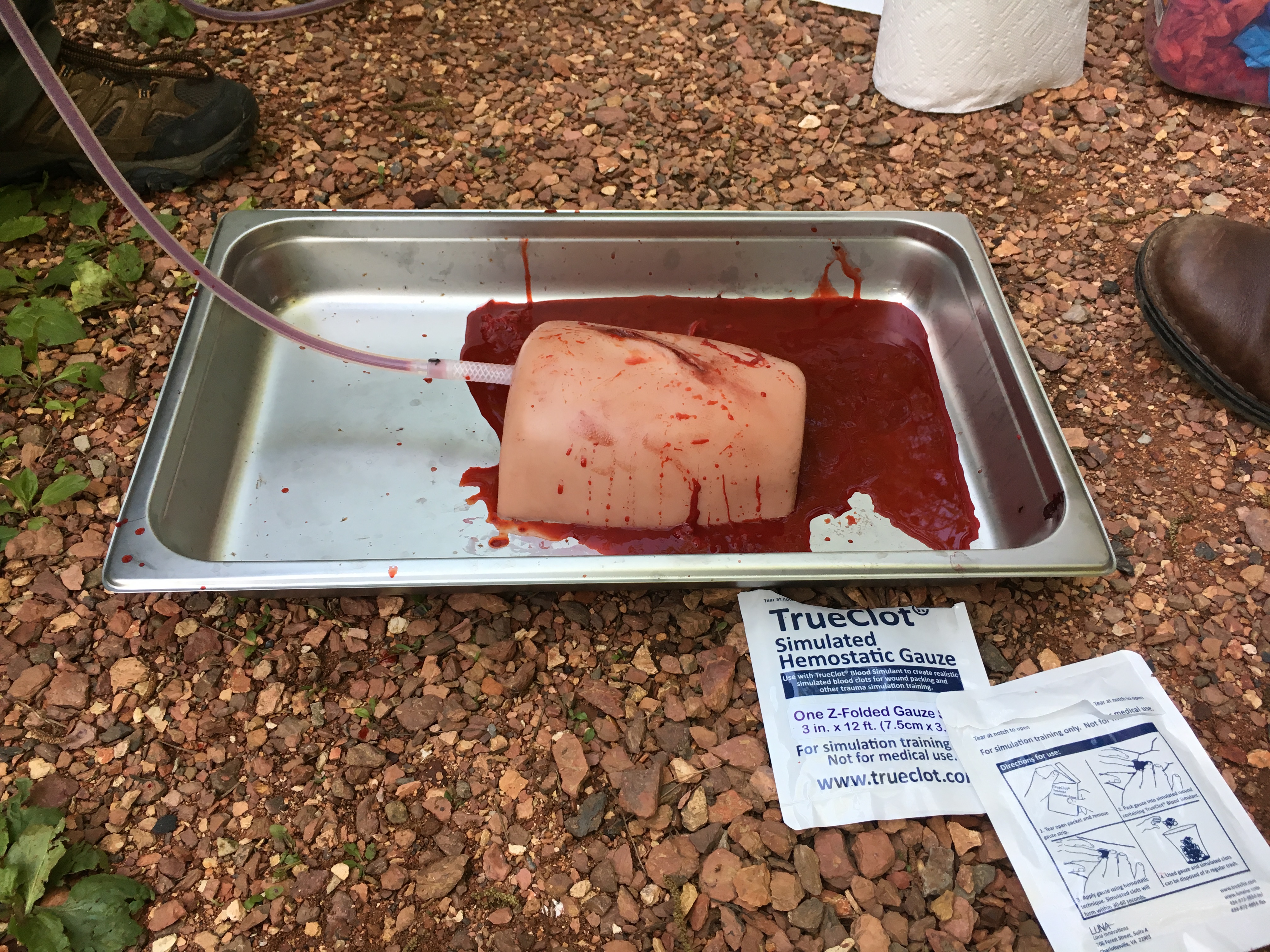 Dan Carsen, WBHM
Tools of the training trade: hemostatic gauze, fake blood that clots like the real thing, and a fake human thigh.

I joke that they’re real human body parts. Dr. Lee Burnett, a UAB oncologist and outdoorsman who’s leading the course, tells me they are actually molded from real humans. Then he asks the group, “who wants to go first?”

Anne Balch, Ruffner Mountain’s office manager, steps up. She says she wants to learn how to pack wounds because so many people hike out into the rugged reserve.

Burnett points to one of the two pans. “Here’s a deep laceration … and that one’s a high-velocity gunshot wound, with the femur involved. Which person would you care to help first?”

Balch chooses the gunshot wound. Burnett, who helped found the Alabama Wilderness Medicine Association and teaches all sorts of life-saving techniques around the state, squeezes a plastic bottle connected to the fake thigh by a tube. Very realistic fake blood starts spurting out of the hole. The joking stops. Balch kneels down and gets into a quick two-handed rhythm: apply pressure, pack gauze, apply pressure, pack gauze.

“Absolutely not,” replies Balch with a laugh.

The fact is, most people are unprepared for situations like this, says Burnett. But this course is one effort to change that.

“Las Vegas, the Boston Marathon bombing – you aren’t going to have enough professional medical care providers to address all the people who might need assistance,” he says. “The more people who are trained and prepared, the better.”

Put another way, according to BleedingControl.org — an effort by the American College of Surgeons and other groups to teach the public these emergency techniques — “the only thing more tragic than a death from bleeding is a death that could’ve been prevented.”

Burnett reminds the class about something he’d said earlier: though it might be tempting, do not let up on the pressure or unpack the gauze to check the wound – that could interfere with clotting.

“And at this point squeezing the bottle, I’m finding it difficult to get anything to get out.”

Balch’s pressure and the clotting have basically stopped the bleeding.

Burnett reviews the “ABC’s” of bleeding control. Once the situation is safe, “A” means “alert”: call for help if you can. “B” is for bleeding, as in, find the source, which is not always easy when there’s blood all over or when the main wound is under someone’s clothes. “C” is for “compress”: use direct pressure, tourniquets, or both.

“The stop the bleed program is definitely worthwhile,” says Wes Ward, emergency medical services training officer for the Center Point Fire District. He’s taken and given courses like Burnett’s. The bleeding control techniques can be used with improvised materials — like belts for tourniquets or clean cloth for gauze — but kits with specially designed field tourniquets and hemostatic gauze that speeds clotting make saving lives more likely.

“[We] probably need to work towards committing public funding to having these kits available in public places in the same way that we did 10 or 20 years ago with public access to defibrillators,” says Ward.

Last year Georgia set aside a million dollars to put almost 30,000 bleeding kits in its public schools — roughly a dozen in each building. In Alabama, it’s more district by district, but Ward, Burnett and many of their colleagues hope it’ll go statewide, because the need doesn’t appear to be going away.

“The fundamental principle for hemorrhage control: First off, don’t create another victim. Be aware of potential dangers to you as a well-intentioned assistant. If that’s on the side of the road, you do not need to get hit by a car in your attempts to get to someone else. If it’s a violent scenario, again, wait until there’s a reasonable chance to intervene without exposing yourself.”

Not as Easy as it Sounds

“Discover the source of the life-threatening bleeding. This may require you to remove clothing or to cut clothing. If you’re cutting clothing, especially blood-soaked clothing, be very careful not to cut the patient.”

Understand Your Own Reactions, and the Victims’ 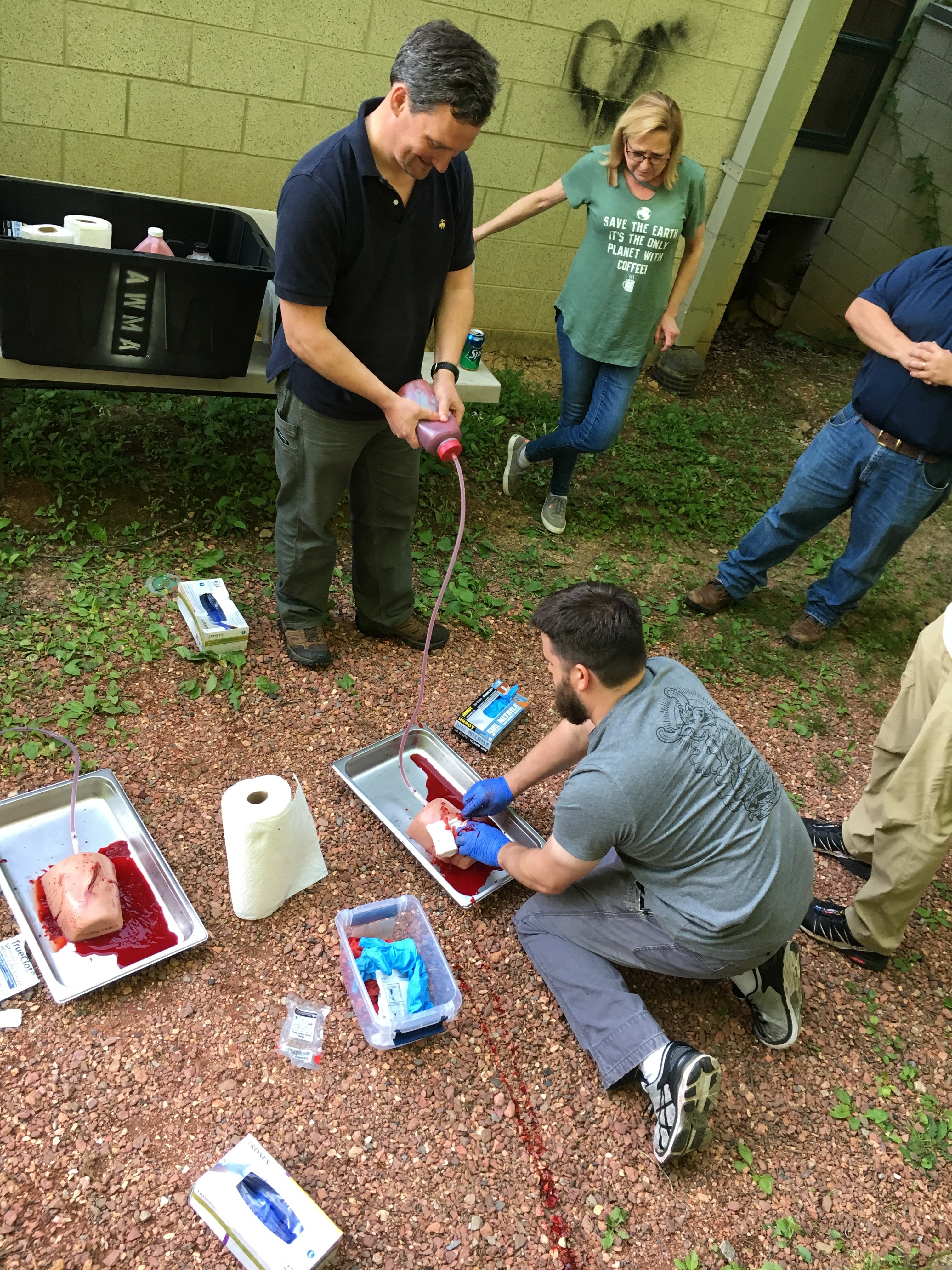 “What do you do if you don’t have a trauma first aid kit? Use any clean cloth or gauze to provide steady pressure directly on the wound. Now how clean is clean? Clean means clothing-clean. You wouldn’t want to use muddy, dirty, fouled clothes if at all possible. On the other hand, a patient will die far quicker of exsanguination than from infection, and bacterial exposure can be addressed with post-exposure prophylaxis and antibiotics. So, use your shirt. Use the patient’s shirt. Handkerchiefs, bandanas, anything available. And steady pressure directly on the wound.”

Use Gravity, Give Warnings

“It’s going to be hard for you to hold steady pressure for the minimum of five minutes necessary to really have the opportunity to initiate a clotting cascade. Because of that, let gravity work for you. Whenever you can lean with locked joints on a patient and just let your body weight put the pressure on them, that’s going to be superior. And that’s going to hurt. You know, you need to be prepared for it. This is going to cause pain for the victim. Let the victim know, ‘this is going to hurt,’ if they’re conscious, because a lot of times people are more frightened by unexpected pain than by engaging with pain that they were expecting.”

How to Use a Tourniquet

“Put it above the source of the bleeding, generally two to three inches above the wound. But do not put the tourniquet directly over knees or elbows. Your knees and your elbows form a bony cage and the arteries and the nerves and the veins go through that, so you can tighten that tourniquet as tight as you can and blood will still be pumping through. And do not put it over clothing that has a pocket with things in it. Somebody’s wallet or whatever it is could interfere with tightening. So just empty the pocket, or remove the clothing.” 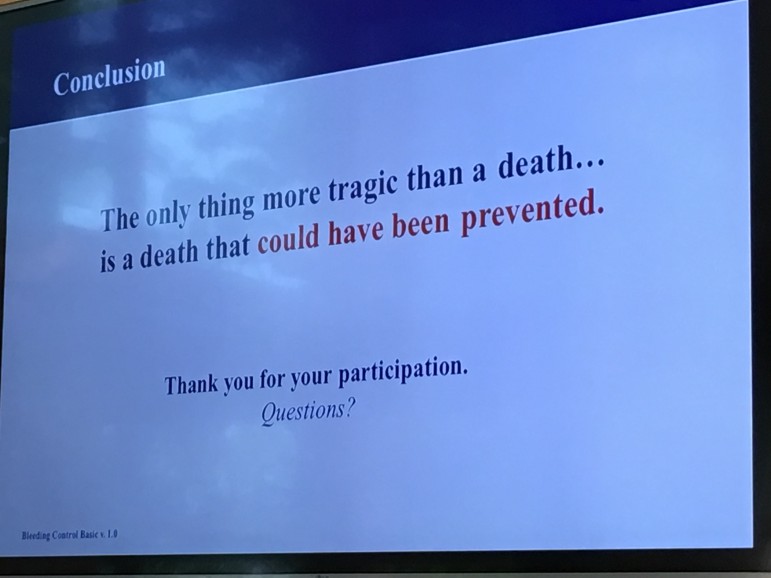