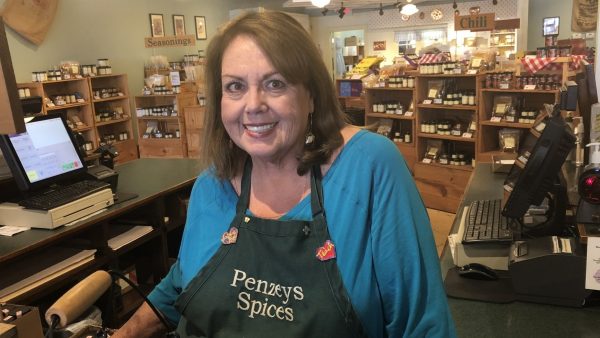 Pat Sheared works in a spice shop in Homewood.

It’s a good time to be in the market for a job in this state. And that goes for older adults too. Alabama’s overall unemployment rate is low – just 4 percent. It’s even lower among seniors. But the older adults who are most likely to be hired are those who are willing to adapt and learn new skills, or try on a whole new career.

“I’m a 25 year old. I’m just trapped in an 81-year-old body,” says Johnny Ward. “I’ve got a lot of energy, and I’m saying why waste this knowledge and experience I have. Why not use it?”

Here in Alabama and across the U.S., there are many like Ward. According to the U.S. Bureau of Labor Statistics, senior citizens represent a growing demographic in America’s work force.

Many still need jobs. It can be difficult to make ends meet with a social security check or disability payment. Some want to work because they enjoy it, like Ward.

Ward recently participated in a class at the Alabama Workforce Training Center. The is offered through a partnership with Positive Maturity and Central Six Alabama Works. It’s called AWARE — Aging Workers Are Reliable Employees. Jehan Quinn teaches the class designed to help people 50 and older find jobs or identify new schools to help get back to work.

Quinn said she’s referred several seniors for job interviews in recent weeks. They’re encouraged by economic growth in the area, and companies are interested, she said.

“You do have a lot of employers who are looking for seniors, because they have those basic skills that aren’t taught anymore,” Quinn says. “Those baby boomers, they were on point. They knew, be on time for work. They knew to dress appropriately for the job you are applying for.”

But before the job interview, you have to have a resume. Ward, the energetic senior, doesn’t have one. In class, tells Ward what paperwork to complete to get a resume done.

She also explained to those in the program the importance of technology. Two of the three men in a recent group have email addresses, but not James Sanders. He said he isn’t interested in using computers – for anything.

“It’s not a part of my everyday life like it is for the younger generation coming up now,” he says. “When I come up, it was 8-track tapes and cassettes. These kids today don’t know what an 8-track tape is.”

Sanders is 65. He doesn’t text or tweet. He uses landlines in his home, and he carries a six-year-old cell phone.  He got laid off from his construction job in May. He said he wants to work with his hands, or train to become a certified nursing assistant. He’s a Navy vet and has worked most his life.

“When you stop [working], it’s like something is missing out of your life,” he says. “I’ve done all the little odd jobs I can around my house and stuff. I’m just ready to get back out there.”

Job hunting for seniors isn’t without its flaws. According to a recent AARP national survey, seniors say, sometimes they just don’t get the job because of age. For others, it’s a challenge of finding the right match for their needs:

Is the job stimulating? Or will it pay enough to help with financial hurdles?

Pat Sheared, 66, retired after a long career in insurance. She stayed at home to take care of her family for a while. Then she decided to go back to work.

Sheared said she was customer at Penzeys Spices in Homewood when she learned about a job opening four years ago.

“Staying at home and not working, your brain gets kinda mushy, and I don’t like a mushy brain,” she says.

She worked with computers in her insurance job. But she said at Penzeys she has learned learned new skills.

“You’re counting money. You’re greeting customers. You’re making sure things are going right. It sharpened my brain back up,” she says.

And that sharpened mind, researchers say, often leads to a better quality of life in the golden years.