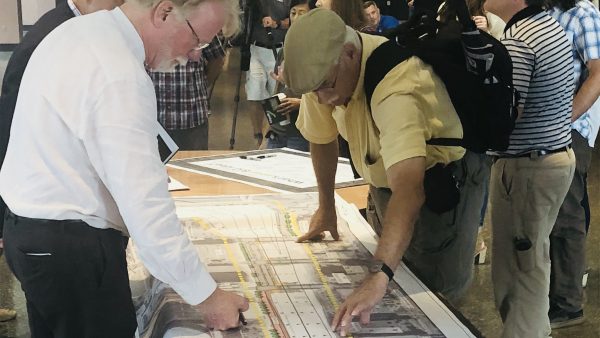 Paul Godbey, right, of Southside, tells designers his ideas about using the space under downtown interstates for parking.

The open space under I-20/59 in downtown Birmingham will cover 10 blocks once the massive bridge replacement project is completed. Designers and Alabama Department of Transportation officials are getting public input today at the Boutwell Auditorium. Other feedback sessions are set for July 24.

Ben Donsky, who works with the New York-based planning and programming group for CityWalk Birmingham, says there’s an opportunity to do things not tried elsewhere. “We’re open to all types of innovative ideas. I was just discussing with a gentleman new technology that would even allow us to grow plants underneath the highway.”

Some people at the morning session said they want to see more parking to accommodate the BJCC and the Birmingham Museum of Art.

Peggy Balliet is a museum supporter. She says she welcomes more green space and amenities, but she wants more museum parking.

Balliet says the parking underneath the interstate in the back of the museum has been blocked off for quite some time. She says it creates a problem because too often the museum’s lot cannot accommodate all of the visitors.

Wendy Chou of Fultondale is  a skater and wants a skate park underneath the bridge.

“There’s no space around here for us,” she says. “They can take this and do several things, not just one big thing, and it will bring in businesses and people.”

Paul Godbey of Southside doesn’t want a park built under the bridge. He says the space should be used for parking to accommodate the new stadium and expansion at the BJCC.

“The people who live in Fountain Heights and Druid Hills have parks they want to see repaired,” Godbey says.

DeJarvis Leonard of  ALDOT says federal and state funds are available for CityWalk. He says it will be completed by Spring 2021 before the start of the World Games in Birmingham.