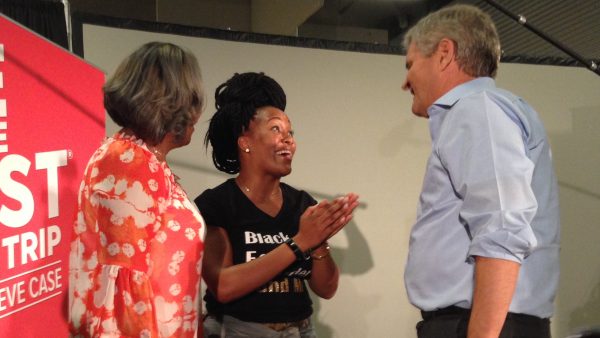 A Birmingham startup that makes software to facilitate networking at conferences and mixers has won $100,000 in an entrepreneurial competition. Mixtroz beat out seven competitors at the Rise of the Rest Birmingham pitch contest Wednesday evening.

The competition capped a day-long visit by AOL co-founder Steve Case and others from his venture capital firm Revolution. Case’s Rise of the Rest tour aims to highlight tech startup scenes away from the hotbeds of Silicon Valley, New York and Boston.

Eight Birmingham entrepreneurs gave four minute presentations before a panel of judges at Sloss Furnaces. The entries ranged from a text-messaging service that helps real estate agents respond to leads, to another providing support for community gardens.

During a panel before the competition, Revolution managing partner J.D. Vance encouraged participants to zero in on how their product or service would appeal to customers.

“Why does someone want to use this? Why does somebody want to engage with this product? Why ultimately, hopefully somebody going to pay for this product?” Vance said. “I’m amazed at how often even among relatively experienced entrepreneurs I leave a 20, a 30, a 100-minute meeting and I don’t actually know why the customers would want to use that product.”

Ashlee Ammons co-founded Mixtroz two years ago with her mother. The company developed software to help attendees at conferences or college mixers meet and connect with others. She describes it as similar to LinkedIn, but in real life.

“This is amazing,” Ammons said just after winning the competition. “This is like a dream come true. But you know what, frankly, we worked for it.”

Ammons started the company in Nashville but moved to Birmingham in January to take advantage of business incubator programs at Innovation Depot. She said the money will allow her to hire people other than herself and her mother. She said it’ll also help ease things at home.

“My mom and I have been sharing a one bedroom apartment for our duration in Birmingham,” Ammons said. “So we just literally said to Steve Case, ‘Oh my God! Two beds. Two beds!’ And I’m so jazzed about it.”

Ammons said after the win Birmingham will likely become the company’s permanent home.