Number of Hate Groups Increased in 2017 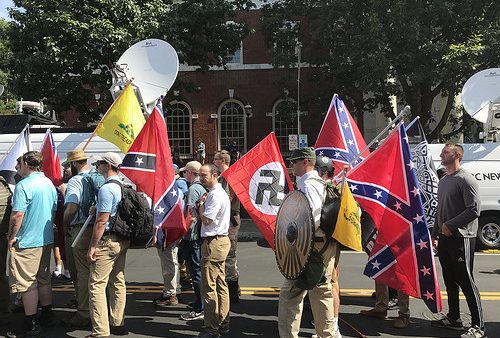 The Southern Poverty Law Center says the number of hate groups in its annual survey rose 4 percent in 2017, spurred in part by an increase of black nationalist groups. At the same time the number of Ku Klux Klan groups dropped significantly.

The report counted 954 hate groups nationally, defined as organizations that “attack or malign an entire class of people, typically for their immutable characteristics.” A group must also have engaged in some sort of activity, such as meeting, holding a rally or publishing a newsletter, to be included in the count.

The SPLC says the number of black nationalist groups jumped from 193 to 223 in 2017. Researchers say this increase is in response to white supremacist views gaining more attention in mainstream culture.

Neo-Nazi groups grew from 99 to 121. The number of anti-Muslim and anti-immigrant groups rose as well. For the first time, the SPLC included two male supremacist groups in its report saying their rhetoric toward women is similar to organizations that demean entire communities.

The report found a steep drop in the number of Klan groups, from 130 to 72.

Heidi Beirich, director of the SPLC’s Intelligence Project, says those numbers rose during fights over the Confederate battle flag or Confederate monuments following a shooting at a black church in Charleston, South Carolina in 2015. But since then, Beirich says, the spread of the alt-right has cut into Klan recruitment.

“I just don’t think this new wave of alt-right folks with their fashy haircuts and their polos and their khakis and this kind of clean-cut look can relate to the Klan,” says Beirich. “It’s just extremely old-school and I think, honestly, weird to them.”

Beirich says she does see hope in curbing the influence of hate groups. She praised tech companies such as Twitter and Facebook for attempting to block hate speech on their platforms.

“They believe their messages and they’re trying to recruit and if you don’t have platforms to recruit from, that reduces the scope of where you can get people into your movement,” says Beirich.

PayPal also announced last year it will not do business with hate groups.