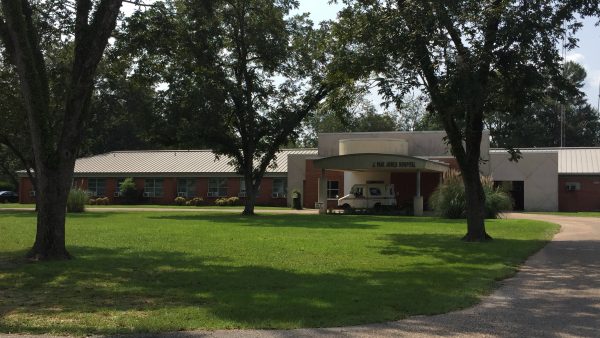 Most rural hospitals in Alabama are struggling and losing money each year. Since 2010, a half-dozen have shut their doors, one of the highest closure rates in the nation. The causes are complex, and the consequences can be dire. That’s especially true in Wilcox County, among Alabama’s poorest. But as it turns out, there might be a surprise ending there.

If you’re new to Camden, Wilcox’s county seat, you could easily drive past John Paul Jones Hospital and not know it. It’s tiny: it’s got two doctors and about 20 beds. But its place in the community is much bigger.

“My husband woke up at 5 o’clock in the morning with severe chest pains. And I said then how fortunate we are to have a hospital we can get to in five minutes,” says county resident Sheryl Threadgill-Matthews.

“That hospital was a lifesaver, for me and my children,” says Wilcox native Ethel Johnson. “My son, as soon as he started on the operating table, his appendix burst. He got there in time. It helped my son to be alive here today.”

Several others I spoke with shared similar stories. Part of the reason? The next nearest hospital is 45 minutes away.

Dr. Sumpter Blackmon has been practicing family medicine in Camden for almost 45 years. He sends lots of patients to what many people in town call “JPJ.”

“I think it’s critical,” he says. “I don’t know of anything more important to a small town than a hospital as far as its health, longevity, and ability to attract new people coming in.”

JPJ supports education and prevention programs, and the hospital is a key employer in the county. But rural hospitals are closing around the country because of the costs of 24-hour emergency rooms, and because of fewer patients overall. And there are some reasons that hit Alabama and JPJ, with its high proportion of Medicare patients, especially hard.

“Rural Alabama’s hospitals are getting reimbursed from the federal government for Medicare hospital procedures [at] the very lowest rate in the entire nation,” says Dale Quinney, Director of the Alabama Rural Health Association. “With our hospitals being among the most needy, why in the world are you reimbursing the lowest rate?”

He says private insurers under-pay rural hospitals too. He and other health experts I spoke with also blame Alabama’s choice not to expand Medicaid, which could’ve insured more people and helped hospitals get reimbursed for services.

All this filters down to JPJ.  “Of our patients coming in the emergency room, about 18 percent have no insurance, and the collection [rate] on that group, unfortunately, gets down to about 6 percent,” Blackmon says.

Dr. Sumpter Blackmon and his wife Henrietta in his office, which borders the same parking lot as JPJ Hospital. Henrietta was once Mayor of Camden.

The end result? John Paul Jones has been losing about a million dollars a year. It was set to close earlier this month.

But in the eleventh hour, the Wilcox County Commission approved a one-cent sales tax increase earmarked for JPJ. If the state legislature approves the measure, it could raise roughly $650,000. And if local businesses put up the rest, the hospital could stay open until it finds other sources of revenue.

“And I’m going to be one of the first to get out and try and campaign for it,” says Threadgill-Matthews, who directs a youth development nonprofit. “We’re really going to have to educate the people too, because you know people are really afraid of ‘tax.’ You know, I don’t know what would happen if we didn’t have a hospital … I think I would just be on edge and scared all the time.”

If that happens, she’ll join the ranks of seven other rural Alabama counties that don’t have a hospital. The legislature could decide the fate of Wilcox’s sales tax increase in its spring session.

Spine boards stand alone in a quiet moment outside the entrance to the only emergency room in Wilcox County.