The Ripple Effect When a Giant Iceberg Breaks Away From Antarctica 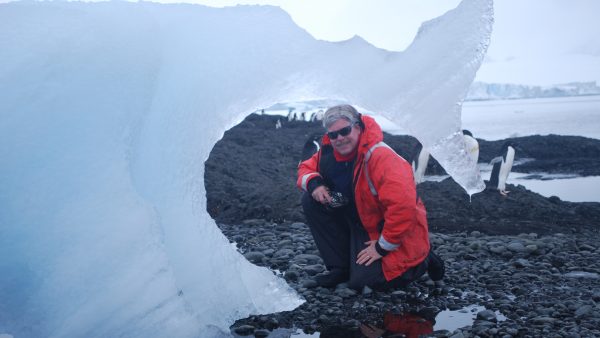 This week, scientists watched an iceberg the size of Delaware break away from Antarctica’s Larsen C ice shelf. The mass of ice that broke off weighs about a trillion tons. It’ll eventually melt, but as UAB polar biologist and Antarctic explorer Jim McClintock tells WBHM’s Dan Carsen, there are some long-term concerns.

Here are some highlights and an extended interview.

“The Larsen C ice shelf just shed a piece of itself that is the size of the state of Delaware. So this is a significant chunk of real estate. The ice sheet is about 1,200 feet thick on average. The piece that broke free is now one of the largest icebergs floating around that has ever been recorded.”

“As it melts, it will not contribute to sea level rise because it’s already in the ocean, much as a glass of ice water, when the ice melts, the water doesn’t come over the top of the glass.”

Some of the Bad News

“Ice sheets, as they break up in Antarctica, are essentially barriers to the ice that sits on top of the continent — that two- to three-mile-thick layer of ice where about 70 percent of our freshwater resides on the planet. That ice is flowing towards the ocean from land into the water, and that flow has accelerated in areas where ice sheets have broken out. That is the ice that contributes to sea level rise.”

“We study chemicals produced by sponges and corals that live in Antarctica. And these chemicals are interesting because they defend sponges and corals from predators and things that want to grow on them. They have ecological importance but they also have the potential to fight human disease. And so here in the last 25 years, we’ve come across a compound in an Antarctic tunicate that’s active against melanoma skin cancer … And these changes that are happening — the warming water, the increase in icebergs that are scouring the sea floor because of the ice that is breaking up, all these things are threatening that seafloor community and have an impact on the availability of these potential compounds that fight cancer and different types of human disease.”