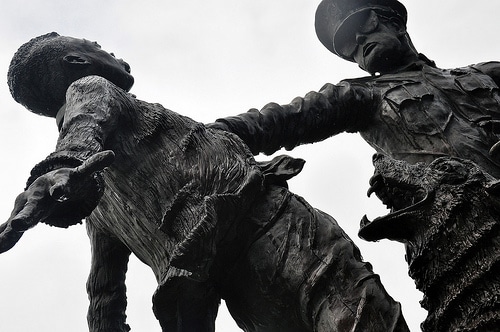 A statue in Birmingham's Kelly Ingram Park depicts police violence used against protesters during the Civil Rights Era. The park and other sites are now part of the Birmingham Civil Rights National Monument.

The 16th Street Baptist Church in Birmingham was etched into American history when Ku Klux Klansman bombed the building in 1963 killing four girls. Visitors come to the church from around the world. If they do that now, they’ll be part the newest national monument. President Barack Obama designated three national monuments Thursday all related to civil rights.

One of them, the newly-created Birmingham Civil Rights National Monument, includes the church. It also includes Kelly Ingram Park, where children marching for equal treatment were met with police dogs and firehoses. Other parts cover the A.G. Gaston Hotel, where Dr. Martin Luther King Jr. had his war room to plan the Birmingham campaign, the Birmingham Civil Rights Institute, and Bethel Baptist Church which was led by Birmingham civil rights leader Rev. Fred Shuttlesworth.

It’s been more than 50 years, but freedom songs still flow from Myrna Jackson’s lips. Jackson explains she learned those songs in the basement of the 16th Street Baptist Church. She marched against segregation in 1963 and was arrested.

“In jail…the officers would get on the intercom and say ‘Oh, I wish I was in Dixie,'” says Jackson. “They’d aggravate us a lot.”

She says some things in life are given to you, but this designation was earned. It was earned through the struggles of foot soldiers like her.

The pastor of the church, Rev. Arthur Price, says being part of a national monument will help Birmingham tell its story.

“It’s a story about freedom and justice,” Price says. “How foot soldiers fought inequality, injustice and inequity so that we could have the rights that we have today.”

Carolyn McKinstry survived the bombing at the church and has spent a career talking about civil rights. She says no matter where she goes around the world, people know Birmingham’s story. But she says having Washington put its “seal” on these sites is like “giving the bird wings.” She says what happened here matters.

“Of course, our history is somewhat painful but we learned from our history,” says McKinstry. “It’s by learning that we’re able to move forward.”

People around Birmingham were anticipating this announcement as President Obama approached the end of his term. Birmingham Mayor William Bell says there’s special significance in the fact that the first black president created the monument.

“Were it not for the struggles here in the city of Birmingham, none of us would be where we are this day, including the president of the United States of America,” says Bell.

In addition to the Birmingham designation, Obama established two other monuments that will be part of the National Park Service. There’s the Freedom Riders National Monument in Anniston. That’s where a Greyhound bus was firebombed in 1961 as freedom riders tried to integrate interstate buses. There’s also the Reconstruction Era National Monument in South Carolina which includes sites related to freed slaves in the years after the Civil War.

Not Just About the Past

The Fourth Avenue Historic District in Birmingham is part of the Civil Rights National Monument, too. The district was a hub of black business during segregation. At the Magic City Barber Shop, A.J. Johnson echoes the sentiment of many that this action should have happened long ago. When he thinks of the visitors the monument could attract, he hopes they’ll see the Birmingham of today.

“It’ll bring people here so they can actually see that we’re not a country city. We’re not kicking cans down here. We’re not hanging people anymore,” says Johnson.

These new civil rights monuments may represent that painful past. Johnson mentions how his mother couldn’t walk into a popular hamburger restaurant because she was black. But he says if you walk into one of those restaurants today, there’s a good chance someone black is running the place.