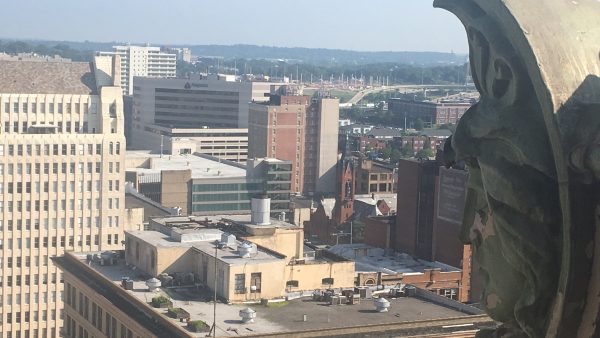 The roof top bar atop The Elyton Hotel preserves the building's original architecture and offers a several different city views.

The old Colonial Bank Building at the corner of 1st Avenue North and 20th Street downtown stood vacant for years. Today it opens as an upscale hotel with a polished face and a plush interior, reminiscent of the city’s history as a center for industry and commerce.

This 17-story stone-washed building sat on what was known as the heaviest corner, because of the sheer size of the buildings and the business they did. Now with its renovation into the Elyton Hotel, Birmingham leaders are looking toward more revitalization.

“It’s coming back to life now,” Mayor William Bell said while touring the building Tuesday. “Through the partnership with the developer, the city, and other interested parties, we look forward to doing other projects like this throughout the city of Birmingham.”

Hotel developers used state historic tax credits in the $45 million project. Its name, Elyton, comes from the former town that was the center of trade and government through the mid 19th century.

The Elyton includes 117 rooms, a rooftop bar, and a restaurant.

Denise Vandersall, the general manager, says that history is reflected in almost every aspect of the venue, from the chandeliers to the old brass mail chutes.

“It’s bringing back the past and integrating it with the modern and showing people what was there many years ago,” she says.

Only one building – the Brown Marx Building — remains vacant at 1st and 20th, but no development plans have been announced.