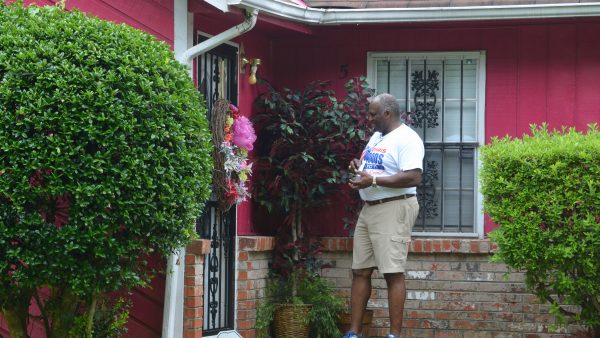 Chris Woods is a child of the civil rights movement. He came of age as his father and uncle battled racial injustice. But Woods, now running to unseat Birmingham Mayor William Bell, has had different struggles that have shaped his own vision for the city. Here are excerpts from his conversation with Sherrel Wheeler Stewart.

Who is Chris Woods?

Well, Chris Woods is this a native from Birmingham,  a graduate from Parker High School, the son of Bishop Calvin and Lucille Woods. I am one of 13 children. I have six brothers and six sisters.

They were Alabama fans and when Chris Woods got a football scholarship to Auburn — that’s when all my family got saved. So, we’re well grounded and rooted in the Christian faith, and that’s my greatest possession. That’s my identity.”

In your advertisements, you speak of an all-inclusive Birmingham. What does that mean?

My past 28 years has been a journey here, just seeing that it’s a politically-connected culture. If you’re not the in-crowd, you don’t get a fair honest opportunity, and that’s reflected in the black community. We have a growing rate of poverty nobody’s talking about, health issues that we need to address. With the economic opportunities available, the city would thrive.

This is not your first time running for mayor. About 25 years ago, maybe a little less than that, you took on Mayor Richard Arrington. What did you learn during that run, and what’s different for you now?

I’m a more mature spiritual-led man now. I had the right intentions, but it’s a certain way we have to go about it.

What can the mayor do to help bring about a community where the police are respected, but the community is protected?

You know the first responsibility as mayor is the safety of our citizens, our businesses, and visitors. With 90 percent of the crime in this city being occurred by young black men, that tells me maybe education hasn’t done its job. So I want to attack it by crime prevention.

I want to revolutionize and bring back and add to and improve our trade academies. If we can get them seeing themselves succeed and give them a career, presenting economic options to them, then I think we’ll see that trend reversed. And that’s one approach.

The other approach is police morale is very low and we’re undermanned 100 to 200 police officers. We have to fill those positions and Birmingham has been a revolving door to surrounding cities.

What is the mayor’s role in ensuring that our community has a solid foundation for public education?

It is true the elected school board and superintendent is responsible for the policy. But as mayor, I will make sure the city finances are in order, so when the school board has a funding gap, the city can be there to pick up the pieces. I don’t mind going out on a limb if it takes proposing to the city council or the city to go back to the state legislature to dissolve this elected board and make it an appointed board, the way it used to be, so we can guarantee that educators, business people, people who are not trying to enrich themselves are on the board.

As mayor, I will have the best interests of the school board in mind. We get more concerned about who’s getting the contract awarded to them versus our kids learning. And that needs to be the total focus of these kids. I’ve put my life into some of them and they deserve an opportunity.

How can we spread out the flow of economic development dollars in a way that also benefits inner city neighborhoods?

Our total focus has been in the metro area, and that’s not fair. It will be my first property to revitalize those neighborhoods. Put the strip malls out in the western section around Pratt City and that whole stretch. They have to leave the city to go to the grocery store. No citizen should have to leave the city for that.

You went through a rocky period with the city and were awarded a $2.5 million settlement in a contract dispute to your favor. (October 2016). Does it help you in your run for mayor, or do you think that may have in some way cast a shadow over you or your efforts?

You know my wife and I were very, very careful in approaching this and we really prayed because really the lawsuit was about half of what it was worth. But what I’m doing has motivated me to prevent other people from having to go through this. I know myself, I know I’ve done it right. And I look at the other young kids who won’t won’t have the resources and maybe the popularity because of my athletic background and my family Christian and civil rights (background). I said, ‘Wow other kids don’t have a chance if this has happened to me.’