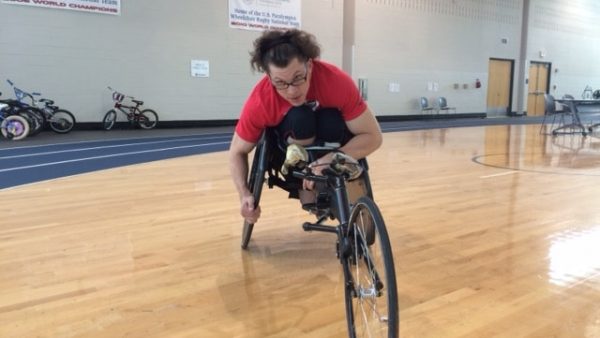 Paralympic athlete Josh Roberts chilling out in his racing chair.

Most of us expect to sweat when we get hot. But imagine if you couldn’t sweat. This condition actually affects many people with spinal cord injuries – like Alabama native Josh Roberts. Roberts will be in Rio de Janeiro this September for his third Paralympic Games. He’s a member of the 66-person U.S. track team and occasionally trains on the indoor track at Lakeshore Foundation, the Paralympic training center in Homewood. He’ll be competing in the men’s 100-meter track event in Rio. In contrast, he’s also racing in the much longer 1500-meter.

“You know, I want to be competitive in both,” says Roberts. “But I made the team in the 100. So, I really need to focus on it because that’s the one I’ve been the best at most consistently.”

Paralympians are broken down into classifications based on their physical ability. Roberts competes in a group of athletes that have almost full mobility in their arms but are nonfunctional below the waist. He’s been in a wheelchair since 2002, when a car accident severed his spinal cord, leaving him paralyzed. Before getting injured, Roberts was fairly athletic. And now, “I didn’t look at it as becoming a Paralympian,” he says. “I wanted to do something competitive again. That’s kind of where I got started. It’s just trying to do a sport, trying to be competitive and it turned into being a Paralympian.”

Roberts cranking his way around the track at Lakeshore Foundation.

Roberts trains mostly outdoors. This can be brutal during an Alabama summer, but it’s particularly difficult for him because his body is completely out of whack. Remember, he can’t sweat. The injury damaged Roberts’ autonomic system, which regulates the body’s temperature and heart rate. By not sweating, he can’t cool down. At the same time, “In a full sprint my heart rate will not go up,” he explains. “My blood pressure is always low. And it definitely affects training living in Alabama. There’s only a few times a day that I can actually go outside and be really active.”

That’s basically sunrise and sunset. Roberts keeps a chest full of ice with him to help him cool down after those grueling workouts. But the average daily temperature in Rio right now is only around 77 degrees.

Roberts uses these “hard gloves” to grip the push ring on his racing chair.

Then there’s the political climate. Several high-level politicians – including Brazil’s president – were recently indicted on corruption charges. And there are public health issues, like contaminated water and scares over the Zika virus. But Roberts has been to Rio before and says it’s no different than any other place.

“There’s always a concern when you’re traveling somewhere,” he says. “And it doesn’t matter where it is. But athletically, being part of Team USA we get taken care of really well.”

That means a support staff is on the ground ensuring that athletes have the access and resources they need for the duration of their stay in Rio.

The games kick off September 7. Roberts says he’s anxious to hit the track as part of the largest U.S. Paralympic team in history. Proof, he says, that participation in disabled sports continues to gain popularity.