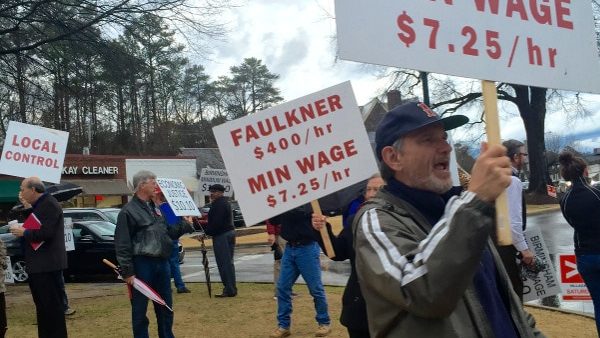 Protesters gather in Mountain Brook on Tuesday, February 16, 2016, to protest a bill which would prevent cities from setting their own minimum wages.

The State of Alabama has no minimum wage, relying instead on the federal floor of $7.25 an hour. So the Birmingham City Council passed an ordinance raising the city’s minimum wage to $10.10. But in February the legislature passed and the governor signed a bill that says only the state can set minimum wages, effectively nullifying Birmingham’s action.

The suit contents a majority-white legislature is blocking the will of a majority-black council and city. It also says the law disproportionately affects African-Americans because they would be more likely to benefit from a wage increase.

The law does not specifically mention Birmingham and applies statewide. Still, attorney Penda Hair says there doesn’t need to be a smoking gun to prove racial motivation.

“You don’t have to have a confession that ‘I’m doing this in order to hurt people of color.’ You look at all the factors,” says Hair.

“[The city’s] motto is ‘the people are the city,'” says Douglas. “The legislature must think Birmingham is an uppity city and they’re making a joke of that motto.”

The suit does not seek monetary damages. Instead it calls on the court to block the state law so the local minimum wage can go into effect.

A statement from Alabama Attorney General Luther Strange says the lawsuit is really about a dispute between the Birmingham City Council and the state legislature, but he says his office will vigorously defend the law. The governor’s office did not immediately respond for comment.