A Bridge Between Police and Teens 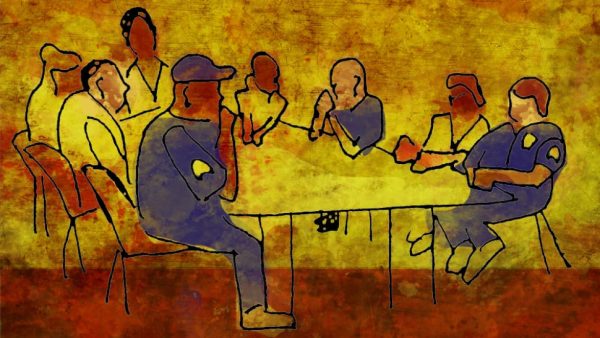 When Timothy Jordan walked into a room with six police officers in uniform, he wanted to turn back around and leave.

He had a confrontation with police as a 13-year-old. He was at a skate rink and asked to leave for wearing an un-tucked shirt. He got an attitude, a police officer escorted him out of the rink and pushed him up against a car.

Jordan says it was scary. He still sees police officers as scary.

This encounter may be small, but this summer has seen headline after headline of violent encounters between people of color and law enforcement. In some cases, officers shot and killed black men. In others, police were the target of bullets. Now a Birmingham organization is trying to create a bridge between police and teens.

Timothy Jordan was part of that effort. Earlier this month as students joined Birmingham police officers for a facilitated conversation at the Birmingham Public Library’s Springville Branch. It was organized by CommuniSafe, an education organization encouraging positive relationships between police officers and young people.

“Our goal is to bring authority figures and students together and just sit face to face and have a conversation with each other,” says Smith.

Smith has been concerned about the relationship between youth and law enforcement ever since she started teaching in a low-income school in Mississippi four years ago.

When she started reaching out in Birmingham last year, police officers were reluctant to commit.

“Prior to Baton Rouge, Minnesota and Dallas, it was difficult to get people on board,” says Smith. “We didn’t want to single anyone out…Nobody really one wanted to touch the subject. Now it seems like everybody’s recognizing that we have to start talking about this.”

Now, Smith says, police officers want to talk. The Birmingham Police department sent six officers to participate in this initial CommuniSafe dialogue. They couldn’t all fit at the table.

The facilitator directs the dialogue around the themes of stereotypes, power and authority.

Across the table, Officer Clayton Whitfield gets why people may have a negative perception of police

“We are in the line of work of we put bad people away,” says Whitfield. “So in turn when you first see us the first thought isn’t, ‘Oh hey, it’s police.’ It’s, ‘Hey, I’m doing something wrong’ or ‘Why are they even here in the first place?'”

While he can sympathize, Whitfield says doing his job is incredibly hard.

“Now we’re being attacked and ambushed. To be honest with you, everyday I put on my bullet proof vest, I’ve actually thought of myself as being nonexistent ’til I take it off,” says Whitfield. “We need to communicate and let everyone voice their opinion so we can answer questions that no one seems to be answering or at least attempt to.”

The students ask about what police officers learn at training and the officers ask about student reactions to law enforcement. And it’s not just the youth who are curious. Jordan’s mom asks if police are trained to “shoot to kill” or “shoot to disable.”

An officer says the answer is shooting to kill. He says it minimizes risk

The big question, though, is if dialogue like this can improve police and youth interactions so physical altercations can be avoided altogether.

The police officers around the table are optimistic. It’s their responsibility, they say, to change the way people see law enforcement. One way is to talk to young people as they’re doing in this event.

Timothy Jordan’s feelings toward the police have changed since he first walked into the room.

“If any of my friends right now found out I was sitting in there with police officers just talking, they say he snitching…being friendly with the police,” says Jordan.

Sitting down and talking to one another, Jordan says, is how police officers and youth can understand each other.

CommuniSafe is developing a curriculum that can be taught in Birmingham and Jefferson County schools. It’s one way CommuniSafe founders hope to mend a fraught relationship that has too often resulted in bloodshed.