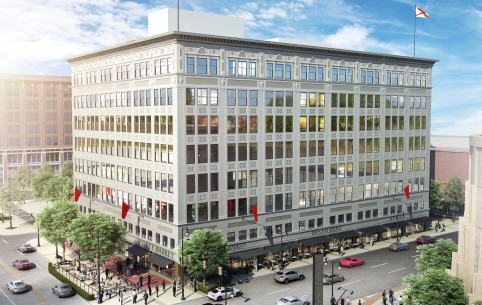 A rendering of the future Pizitz Buliding in Birmingham, Alabama. Built in 1923, it stood abandoned for decades. Bayer Properties says its apartments and stores will be finished by Fall 2016.

It’s a busy day inside the McWane Science Center in downtown Birmingham. Kids play around a brightly colored Rube Goldberg machine in the center’s pristine lobby. But look out the window across Second Avenue North, and there’s something very different: the eight-story building that once housed the Pizitz department store, closed now for almost 30 years. Windows are missing, and the façade shows 92 years’ worth of cracks and stains. You’ll also see construction crews working to rejuvenate the building.

The plans are for more than 140 apartments, plus storefronts on the ground level.

Janet Rainey of Prattville is visiting McWane today with her family. “Really nice architecture,” she says as she admires the Pizitz from the windows. “I like the details.” She says she’s noticed gradual progress when her family visits McWane every few months.

“It’s wonderful how Birmingham does such a nice job keeping downtown restored.”

Most of the restoration she’s talking about has taken place in the last three years. UAB history professor and former City of Birmingham preservationist Pamela Sterne King credits Alabama’s historic rehabilitation tax credit with the boom. She’s witnessed downtown’s evolution firsthand and has a particular affection for the Pizitz.

“You know, you look at a building like this, and it’s just like any of us, really,” says King. “If our hair isn’t washed and we don’t have our makeup on and we’ve been out working in the yard, we’re not gonna look very good.” She says she’s never seen anything like the momentum the tax credit created, which has breathed new life into the buildings she loves.

“When you drive by these buildings and they look dilapidated to you, if you look closer … you’ll see all the beauty,” King says.

Birmingham is banking on that beauty. The Pizitz is just one of over a dozen historic buildings being restored downtown. Mayor William Bell has even called for raising the historic tax credit’s $20 million annual cap. But the program is set to expire in May of 2016, and all the available money is already spoken for.

“I just got my 75th overall application,” says Jennifer Bailey, coordinator of the tax credit program for the Alabama Historical Commission. “And I have ten more on the waiting list.” She says applications from hopeful developers are still coming in.

But it’s not clear yet if the credit will be renewed in the 2016 legislative session. That worries people like David Silverstein, a co-owner of Bayer Properties, which bought the Pizitz building in 2000.

“My hope is that it’s reinstated so that other developers throughout the state can focus their attention on downtown redevelopment of historic structures,” says Silverstein.

Those developers will have to wait. Alabama’s ongoing budget troubles have put all tax credits on shaky footing. State Senate President Pro Tem Del Marsh says Alabama will have to make some tough choices with tax credits, and that creates uncertainty for developers like Bayer.

Silverstein says they already have other building projects in the works that would use the tax credit if it continues. “We are actually looking to redo the New Ideal building, which is hopefully another project where we can perhaps use the historic tax credits.”

David Fleming is president and CEO of REV Birmingham, an economic development group. Bottom line, he says: the tax credit is too smart an investment for the state to pass up.

“We know from numerous studies that rehabilitation of historic buildings usually does more to improve or enhance your local economy than even the same amount of new construction,” he says.

Back at McWane, Janet Rainey is still admiring the Pitiz’s architecture. She says she hopes to see more progress every time she makes the trip into the city.

“You bring downtown back to life. You bring commerce back. You bring the economy back, and it all makes a difference. And beauty is just part of it,” she says.

Developers hope the tax credit will be renewed, though construction may stall in the meantime. Downtown Birmingham and the entire state still have plenty of historic properties that could be restored. The legislature now has to decide what it’s worth to revive them.