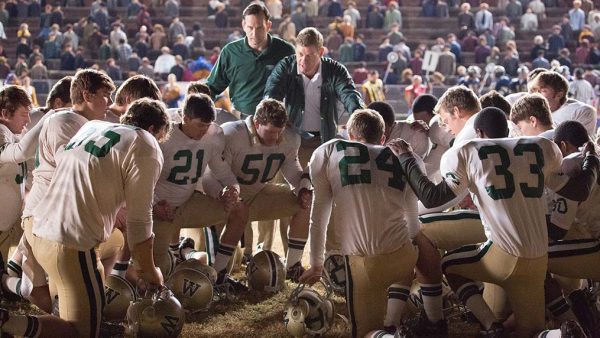 A still from "Woodlawn," produced by Alabama natives and brothers Jon and Andy Erwin. The film was shot in and around Birmingham.

Most states offer tax incentives meant to attract film production—creating jobs and stimulating the economy. As budgets tighten, some are scaling back or eliminating them. But even after recent heated budget battles, cash-strapped Alabama is keeping those tax credits, prompting some to question their effect on the fiscal bottom line.

In late September, more than 3,000 people crowd the BJCC Arena in Birmingham for a preview of Woodlawn, a football drama set during the desegregation of Birmingham’s Woodlawn high school.

“The only way we can do that is with the tax incentive that Alabama offers,” says Jon Erwin. He says he loves living in Alabama and wants to keep making films locally. “I’m just very, very grateful that Alabama has its own incentives and we were able to bring work here.”

Since the program started in 2009, more than 50 feature films, TV shows, and commercials benefited from the tax breaks. On the surface, the credit seems to be working. “There’s no plans to change our incentives at this point,” explains Alabama Film Office director Kathy Faulk, who says the program does what it’s supposed to at little cost. “We are very happy to have the 20 million we have. It’s modest, but we are very proud to have that because I think there is a fit for us.”

Faulk says that producers have spent almost $90 million in Alabama. But Faulk and the Film Office can’t point to any hard data that shows these numbers. That bothers Senate President Pro Tem Del Marsh.

“It’s questionable,” says Marsh, citing “the fact that we have not been able to gather, in my opinion, the sufficient data. We want to know at the end of the day that it’s a net gain to the state.” He’s pushing for an oversight committee to review all tax incentives, including the film program. “We want to know that through job creation, or films that are created here, that we see real revenue come to the state,” Marsh says.

Like the Erwin Brothers, Birmingham independent producer and composer Ted Speaker hopes the incentives are here to stay. He’s currently working on a documentary on Nina Miglionico, the first woman elected to the Birmingham city council. Speaker says the incentives are flawed. To qualify now, productions need to spend at least a $500 thousand. Speaker’s films usually cost less than that, and he’s frustrated he can’t shoot in his home state more often.

“There’s actually a film that I have in development right now that is around a $300,000-400,000 film, and we’re looking at Mississippi or Arkansas because we can actually meet those [tax rebate] requirements and get somewhere between 20 and 30 percent back.” He doesn’t understand why neighboring states have lower cut-offs for tax breaks and wants Alabama’s cut-off lowered. Mississippi’s film-budget minimum is one-tenth of Alabama’s – just $50 thousand.

“What’s the difference between five $500 thousand movies and one $1.5 million movie?” Speaker wonders. If Alabama decides to keep the credit, he thinks changing it will bring more business to the state. Speaker and others also suggests Birmingham start a local incentive for the film industry.

“With current budget challenges at the state, I don’t know you will see any significant changes in film incentives soon,” says Buddy Palmer of Create Birmingham, a non-profit working to enhance local art and culture. “It may be incumbent to really look at what can be done locally for the immediate future.” Palmer says the best approach is a combination of state and local incentives and that “ideally, it is the two in concert.”

The Alabama Center for Business and Economic Research is set to release a cost-benefit report on the program later this month. Film industry players and legislators hope this will answer questions about the program’s success and future.