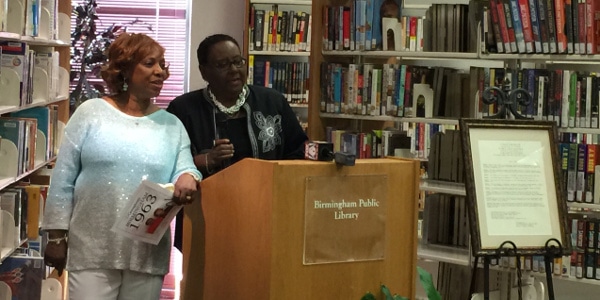 Civil Rights foot soldiers Janice Kelsey (left) and Gwendolyn Sanders-Gamble speak about a New York firefighters resolution from 1963 that condems actions by the Birmingham Fire Department during the children's marches. The resolution is on display at Smithfield Library.

Birmingham’s Smithfield Library is usually quiet.  But on this day in February, there’s a light chatter among the high school students, city leaders and civil rights activists gathered here. Gwendolyn Sanders-Gamble stands in front of them at a podium and talks about her memories participating in the children’s marches.  In May 1963, black youth marched to protest segregation in Birmingham.  They were met with police attack dogs and water cannons.

“The water from those fire hoses, the water that was so painful and so forceful that it pinned me against the wall,” Sanders-Gamble said.

Pictures from the marches shocked many around the country and helped spur President John F. Kennedy to call for the Civil Rights Act.

Near Sanders-Gamble is a gold frame on an easel.  It’s a copy of a resolution sent to Birmingham in July 1963 from the Uniformed Fire Officers Association of New York City – a firefighters union. It condemns the use of fire hoses to harm rather than protect innocent children.  This unveiling at the Smithfield Library is also the first time the resolution been publicly shared in Birmingham.

But five decades ago in New York, the resolution generated controversy.

The union’s all-white executive board wrote the resolution.  It was something retired fire captain Vincent W. Julius and other black firefighters were happy to see.  He says the violence in Birmingham bothered him tremendously.

“I’ve used that same hose to knock down brick walls and here you were hitting children with it,” said Julius.  “It still brings tears to my eyes when I think about it.”

But when the board presented the resolution to the general membership, they tabled it.  Even though Julius was black and relatively new to the union, he protested in front of the board. The panel overruled the membership and passed the resolution unanimously.

“I’ m very proud of that,” said Julius. “It was a good move, a tough move. I took some brick bats for it, but who the hell cares?  Life is made to take adversaries.”

The union sent it to Birmingham and nothing else really happened.

In 2013, several retired black New York firemen mentioned the story of the resolution to the union president at the time.  He had never heard of it. So he looked for and found the document in the archives.

The union held a press conference last year to thank the New York firefighters from fifty years ago and to draw attention to the resolution.  They alsowanted to recognize Birmingham foot soldiers and were put in touch with Janice Kelsey and Gwendolyn Sanders-Gamble.  The two knew the union invited them to New York because of their connection to the children’s marches.  But Sanders-Gamble says they didn’t know about the resolution itself until the press event.

“We knew nothing that we had the support of New York’s fire department or any other fire department, for simple fact that Eugene Bull Conner led everyone to believe that everyone in the world agreed with what he was doing,” said Sanders-Gamble.

Birmingham Battalion Chief C.W. Mardis didn’t know about it either.

“[Reading the resolution] was a surreal experience,” said Mardis. “It was almost like finding a time capsule.”

He says it’s also a comfort to see firefighters were speaking out against the tactics in Birmingham.

The resolution is on permanent display at Smithfield Library.