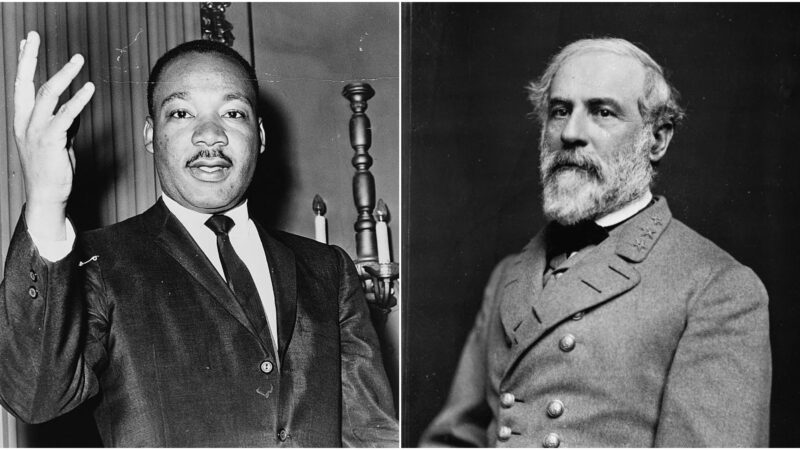 Photos Courtesy Of The Library Of Congress Prints And Photographs Division

Monday is Martin Luther King Jr. Day — a federally-recognized holiday to honor the life of the civil rights movement icon around his birthday, January 15.

As a 2017 Smithsonian Magazine article put it, the two men were born 122 years, four days and an ideological world apart. So, how did this joint celebration come to be? Here are five things to know:

Robert E. Lee Day was first celebrated in Virginia, Lee’s home state, in 1889. This day was changed to Lee-Jackson Day in 1904 to also honor another Confederate general — Thomas “Stonewall” Jackson.

The celebration of Lee and Jackson wasn’t separated from King’s until 2000. According to the Washington Post, former Virginia governor Jim Gilmore felt that “the separate holidays were needed to give each of the men appropriate recognition.” MLK Day would remain on the third Monday in January, while Lee-Jackson Day would move to the preceding Friday.

Twenty years later, Virginia got rid of Lee-Jackson Day altogether and replaced it with a state holiday on Election Day — one of Gov. Ralph Northam’s legislative proposals in 2020. Northam promoted ending the holiday for the Confederate generals by saying, “It commemorates a lost cause. It’s time to move on.”

Recognition in the Gulf South

When MLK Day became a federal holiday in 1983, all three states combined their celebrations for the two men. One reason lawmakers gave for the decision was wanting to avoid having two holidays in January. In other words, lawmakers said they wanted to save money.

North Carolina and Arkansas were the only other southern states that combined the two holidays, but as of 2017, neither state no longer holds a joint celebration.

Unsuccessful attempts to separate the two

Celebrating the two men together has not been popular in recent years in either state.

In Mississippi, Rep. Kabir Karriem, D-Columbus, introduced a bill in 2018 to designate separate days for MLK Day and Lee Day — moving Lee’s Day to the fourth Monday of January.

“Both men had impacts on our history, and I think it’s time to separate the holiday so that King can be observed for the Civil Rights icon he is,” Karriem said in a statement to the Columbus Commercial Dispatch. “I think this change is long overdue.”

The bill, however, died in committee.

As recently as 2020, a bill to separate the two holidays failed in Alabama. Sen. Vivian Figures, D-Mobile, sponsored wanted to move Lee Day to commemorate the day of his death — Oct. 12, 1870.

The bill had bipartisan support but it also died in committee.

A first in Louisiana this year

Unlike Alabama and Mississippi, Louisiana has successfully separated the two holidays.

This year will mark the first time Lee Day won’t be celebrated in the Pelican State after legislators removed it from the state holiday calendar during the 2022 legislative session.

The bill, which was signed into law in June, also removed Confederate Memorial Day from the calendar.

State Sen. Jay Luneau, D-Alexandria, called it “an important step in the right direction,” and is proof that Louisiana is “ready to do the right thing,” when it comes to reversing centuries of racism in the state.