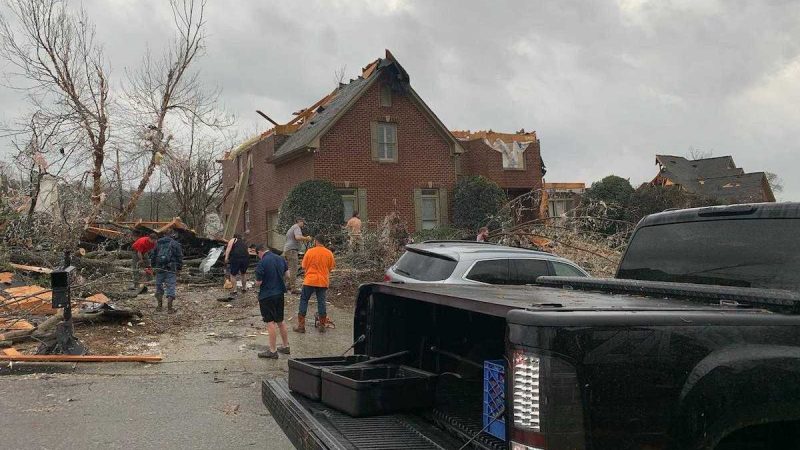 Storm damage in Eagle Point off of Highway 280.

Authorities reported major tornado damage Thursday south of Birmingham as strong storms moved through the state. The governor issued an emergency declaration as meteorologists warned that more twisters were likely on their way.

No injuries were immediately reported in the city of Pelham where the tornado struck. Storm damage, possibly from a tornado, also was evident in the Eagle Point subdivision near Birmingham, where numerous large trees were down and homes were damaged.

Severe storms also were hitting parts of Mississippi on Thursday, a day after authorities reported a weather-related death in the southwest part of the state. Ester Jarrell, 62, died when a large tree toppled over onto her mobile home after heavy rain soaked the ground Wednesday night, a Wilkinson County official told The Associated Press.

Parts of Alabama, Mississippi and Tennessee on Thursday were at high risk of strong tornadoes that could stay on the ground for miles, the national Storm Prediction Center warned.

Some of the metropolitan areas in the path of Thursday’s storms included Memphis and Nashville in Tennessee, and Birmingham and Huntsville in Alabama.

A flash-flood watch Thursday covered northern parts of Alabama and Georgia and portions of Tennessee and western North Carolina.

Up to 4 inches (10 centimeters) of rain — with higher amounts possible — is expected in northern Alabama, according to the National Weather Service in Huntsville.

State troopers closed all lanes of a section of Interstate 65 near Cullman after floodwaters covered the roadway. The highway was reopened later in the day.