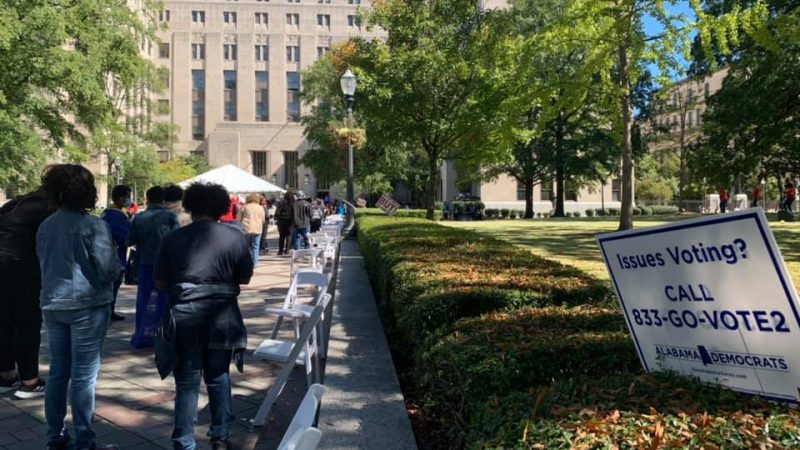 The Jefferson County Courthouse saw long lines for absentee voting. It was one of the counties named in the SPLC's report.

A new report from the Southern Poverty Law Center says Alabama did not do enough during the 2020 election to make voting easier for residents.

The report claims that Alabama added 500,000 new voters ahead of the election, but that the state saw a 4% decrease in voter turnout compared to the 2016 presidential election.

“Unfortunately, we had government-backed efforts to make it more difficult [to vote],” said Nancy Abudu, the SPLC’s deputy legal director for the voting rights division. “[We] had to sue states like Mississippi, Louisianna and Alabama who refused to lift restrictions such as that a photo ID be included in [an] absentee ballot application or the actual ballot, that refused to lift restrictions or requirements that people have a witness sign their application or that they get a notary.”

The report also claims that a refusal to allow statewide curbside voting, long lines and voter intimidation played a role in the decreased voter turnout.

Wade Henderson, interim president and CEO of the Leadership Conference on Civil and Human Rights, said states like Alabama made an effort to help voters cast their ballots during the pandemic.

“But in the end, they didn’t do enough to protect the interest of voters – particularly those who sought to vote absentee because of the pandemic,” Henderson said. “Or who faced additional hurdles in their own districts dealing with access to the polls, particularly the elderly, people with disabilities and some communities of color that were denied voting sites in their local jurisdictions.”

The report also claims that a denial of statewide curbside voting, long lines and voter intimidation played a role in the decreased voter turnout.

“I am very proud of the efforts that were made in Alabama to provide smooth, sanitary, and safe elections during 2020,” Merrill said.

Alabama witnessed record voter participation with 2,329,114 ballots cast, according to Merrill’s office. Merrill said that’s partially attributed to the state including COVID-19 as an excuse to vote absentee.