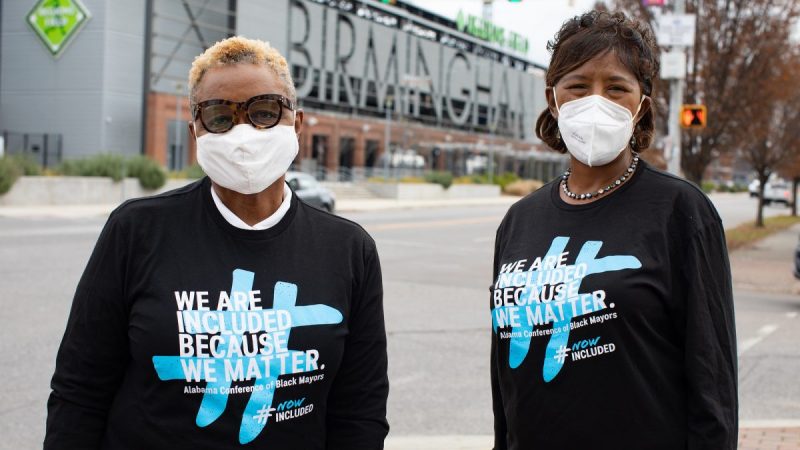 Acclinate, a new Birmingham-based company, is working to increase diversity in clinical drug trials. It's also working with local groups, such as the Alabama Conference of Black Mayors to increase vaccination rates among people of color. Pictured here: Joanice Thompson, who works with Acclinate, and Vickie Moore, the executive director of the Alabama Conference of Black Mayors.

For Del Smith, the effort to increase minority participation in clinical drug trials is personal. His mother, a healthcare worker, passed away from tuberculosis.

“They gave her drug after drug, after drug, trying to figure out which one was actually going to save her life,” Smith said. “And unfortunately, it wasn’t successful.”

He believes now that if drug makers could have created a treatment using clinical trials with more racially diverse participants, a drug regimen might have been developed that better matched her genetic profile and saved her life.

“It could have changed the outcome. Don’t know,” he continued, “but that was the information that we didn’t have.”

Not Just No, But Hell No

Now, as the CEO and co-founder of Birmingham-based Acclinate, Smith and company compile data supplied by people of color who might participate in, and thereby help diversify, clinical trials. While researchers pay to review the data, they’re never given identifiable information about those in the database. Instead, Acclinate contacts participants, who then decide if they want to take part.

However, Smith said Acclinate’s first and primary task is to reach out to underserved communities to build trust in the medical establishment and inform them about the importance of trials.

“The current industry approach is to come to you and say, ‘Hey, would you like to take part in a clinical trial?’ And for many people, particularly minority groups that have a mistrust of medical research, the answer is not just ‘no,’ but sometimes a ‘hell no,'” Smith said.

To repair that mistrust, Acclinate has created a social media platform called #NowIncluded to help spread its message. It also partners with a number of local organizations, such as Miles College and UAB. Recently, it’s worked with the Alabama Conference of Black Mayors to help educate people about the safety of the coronavirus vaccines, as well as the need to diversify clinical trials.

In mid-March, the Conference and Acclinate co-sponsored an event in Hobson City near Oxford to help administer vaccines. Joanice Thompson, the former director for community engagement at UAB’s Minority Health and Health Disparities Research Center, helped organize the event for Acclinate.

During the event, Thompson discussed Acclinate’s mission with participants, explaining the importance of what the company does. It’s that focus on engagement and education that brought her out of retirement to work with Acclinate.

“Let’s educate people first and then introduce them to a clinical trial,” she explained, “and they can make an informed decision as to whether or not they want to participate. But let’s get them ready, because African-Americans and all people of color need to be in clinical trials.

“If there are any differences between myself, as an African-American female or an Asian woman that’s my age, or a Caucasian woman my age, we need to know what those differences are … to make the drugs effective for each group.”

The reaction to Acclinate’s approach has been positive, including those who attended the Hobson City event.

“We collected 95 forms with information,” explained Thompson, “asking them about their giving us permission to contact them, getting their demographic information, also general questions about their health.”

Thompson said she hopes that those 95 people will then convince others, including family members, to engage with Acclinate and add their data.

Vickie Moore, executive director of the Alabama Conference of Black Mayors, believes that events like the one in Hobson City are helping change attitudes.

“So, we’re now a part of the process because of Acclinate,” she said. “We’ve included so many that were left out, but are now included in clinical tests, throughout the state of Alabama. And as we spread our wings, we know that it’s only going to get better and better and larger and larger.”

As the senior associate dean for diversity and inclusion at the UAB School of Medicine, Dr. Mona Fouad has worked to rectify health disparities for more than two decades. She notes that the disparities have deep, systemic roots and cause gaps in health care.

Many people of color, she said, are exposed to diseases like COVID, because they’re essential workers and take public transportation. Health outcomes are less positive in minority neighborhoods because so many don’t have grocery stores, parks, and medical facilities. The gap also extends into knowledge about health-related issues, which is where Acclinate is also playing a role.

“It’s about engagement, and with social media it’s going to reach a lot of our young African-Americans and other minority groups,” Fouad said. “And we need to engage our young generations [about] being part of the solutions to health disparities.

Despite recent progress, though, long-standing issues remain difficult to overcome

“We haven’t made a lot of progress,” continued Fouad. “What COVID did, it’s really put a spotlight on health disparities, not just for COVID, but on chronic diseases and the wide gap that we have in our nation.”

As for diversity in clinical trials, an imbalance still exists there, as well. A study on the topic, issued by the Emory University School of Medicine, Harvard Medical School, and the Fred Hutchinson Cancer Research Center in Seattle, was released in February. It showed that 78% of all participants in clinical trials dating back to 2011 were white.

The Clock Is Ticking

Del Smith, Acclinate’s co-founder, said the causes of such disparities are ingrained in our social fabric. He said those obstacles extend into the work Acclinate is doing, hindering its ability to even get established.

“There are numerous hurdles when you go and you try to create a new company to address longstanding issues in our society,” he said. “It’s difficult sometimes for our society and for the entities that make these decisions to see Black people and minorities actually being the ones creating the solutions to the problems.”

However, he believes Acclinate and others working in that space are having a moment. For instance, his company recently received additional funding from investors and will soon open an additional office in Washington, D.C. (In addition to Birmingham, Acclinate has an office in Huntsville, where it was founded in 2019.)

There is potential, he said, for Acclinate to reach more people, especially now, when the spotlight is on disparities due to COVID-19 and recent protests related to the deaths of George Floyd and Breonna Taylor. However, he feels that time is short.

“This window of opportunity that’s here,” he said, “we don’t know for a fact that it’s going to be as open as it is right now in terms of people’s attention … and focus on the problem.

“We feel that there is a clock ticking, that we must move and move quickly in order to be able to address these issues. And I’ve said it before, there are people’s lives that are at stake depending on how fast we move as a company.”

For Smith that urgency is, again, personal. The loss of his mother wasn’t the only death that had a profound effect on him.

He explained that shortly after she passed away, he began looking for his biological father and discovered that he, too, had died.

“But the more shocking news,” he said, “is that he and every single male on his side of the family passed away from cancer before they turned 50 years old.

“And so here I am, and I’ve got three sons, and I am all of a sudden faced with this knowledge that there’s obviously a genetic propensity for cancer for myself and for my sons. That,” he said, “really put me on a path of health education and health knowledge, and engagement in a way that hopefully will allow me to be the first [male] on that side of the family to cross that 50-year mark.”

With his 45th birthday coming up in April, Smith said he feels the pressing need to broaden diversity in clinical trials for treatments of all diseases, including cancer.

The face of homeschooling is changing and diversifying. In just a year, the number of Black families has increased five-fold— and for more reasons than COVID-19. Several families told WBHM they see homeschooling as a way to protect their children from educational racism.

Wages have gone up as restaurants try to hold onto their staff amid a record number of people quitting their jobs in the U.S., especially in the South.

A missing Alabama woman’s body is found in a parked, unoccupied police van

Christina Nance had been missing since Sept. 25, her family says. Video footage from that day shows her entering the van, which was in a police parking lot. Her body was found 12 days later.