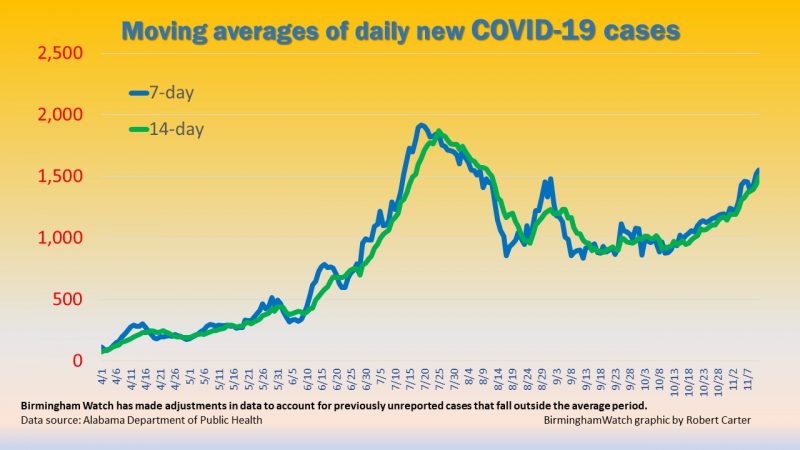 Dr. Jeanne Marrazzo has been taking a close look at the recent data in the ongoing COVID-19 battle, and they have her worried.

“(They are) astonishing numbers that I hope people do not become numb to,” Marrazzo, the director of the Division of Infectious Diseases for UAB Medicine, said as she opened an online press conference Wednesday morning.

The numbers have been increasing steadily over the past few weeks, with new cases across the nation surpassing 140,000 Tuesday and deaths coming in at roughly 1,500.

Alabama has followed suit, with 2,070 new cases and 81 new deaths reported Wednesday. However, as many as half of the deaths were reported at an earlier time and were added to the count after being investigated, an Alabama Department of Public Health official said in an email.

Additionally, the number of patients hospitalized because of COVID-19 has increased significantly, both in the state and nationwide. Mazzarro said that more than 62,000 people were hospitalized across the country Wednesday.

“The last time we saw a number even approaching that was on April 15, and that was 59,900,” Mazzarro said. “We’ve come a long way in many ways, but we are definitely slipping back down that precipice, which is definitely not a very good feeling.”

In Alabama, there are 1,206 COVID-19 patients occupying hospital beds — an increase of just more than 50% in the past 30 days, she said. Hospitals in Huntsville and Tuscaloosa areas are experiencing “a burden” of hospitalizations, she said.

Wednesday’s state numbers compare to the August peak of 1,500 people hospitalized. “We were getting very, very anxious at that point. … I am quite concerned that we may be headed in that direction,” she said.

She pointed out that hospitalization and death numbers tend to move in the same direction as new cases, but with a lag of 10 to 14 days.

Mazzarro noted that the rise in cases nationally is taking place from coast to coast in what she described as “a permeation throughout the country.”

“There are not many areas being spared right now,” she said, taking particular note of the Northeast. That region had made progress in reducing new cases until the past week.

Of additional concern to Mazzarro is not just the increase in Alabama’s new case counts, deaths and hospitalizations, but that those increases are taking place despite fewer tests being conducted.

“If you look at our testing rate in the state, we are probably not testing as much as we should be,” she said.

With the Thanksgiving holidays just a couple of weeks away, Mazzarro cautioned those who may be traveling to give their plans some extra consideration.

“These will be the first holidays that we are experiencing in this pandemic. Last year at this time, the only people who knew there was something called SARS-CoV-2 were people in Wuhan (China), probably,” Mazzarro said. “The safest thing, to be perfectly honest, is not to gather in groups that you haven’t been cohorting with throughout this thing.

“If you want to go home to your parents or your friends or your family or people you haven’t seen, recognize that that it is going to pose a risk in both directions. You may unknowingly bring a symptomatic infection home, and you may acquire an infection when you’re there and bring it back. … If you do it, you’ve got to remember to be incredibly thoughtful.”

Virus Spread in Groups Is ‘Astonishing’

The rate of transmission of the novel coronavirus is “astonishing” where people have been in the same room, particularly in restaurants, bars, gyms and churches, Marrazzo said.

“Singing is a great way, I’m sorry to say, to share this virus because you’re expelling that virus out as you breath out — especially if you’re singing exuberantly, which is how people like to sing,” Mazzarro said.

However, Alabama recently has ended some of its restrictions on communal gatherings. Gov. Kay Ivey last week extended to Dec. 11 her order requiring everyone in the state to wear masks in public. But at the same time, she lifted limits on occupancy rates for retailers, entertainment venues, and gyms and fitness centers.

Social-distancing rules still apply, but even those have been lifted for many businesses as long as people are wearing masks and the businesses install impermeable barriers between groups of people. Businesses that may take advantage of those exemptions include barber shops and hair salons, gyms and restaurants.

The 7-day moving average of new cases stands at 1,551.43 per day, the highest average since the summer peaks soon after the July 4 holiday period, BirminghamWatch’s weekly analysis of Alabama COVID-19 data reveals. The all-time high is 1,971.71. The average of new cases per day has risen by 113 from the last week.

The death toll has spiked in recent days, though some of that can be attributed to the ADPH review of old data. Tuesday and Wednesday had a combined 117 new death reports, which caused the 7-day moving average to jump to 27.86 per day, more than double the 13.57 average on Nov. 4.

Birmingham Watch uses data reported by ADPH, much of which appears on its COVID-19 home page and its dashboard. Both are updated each morning.