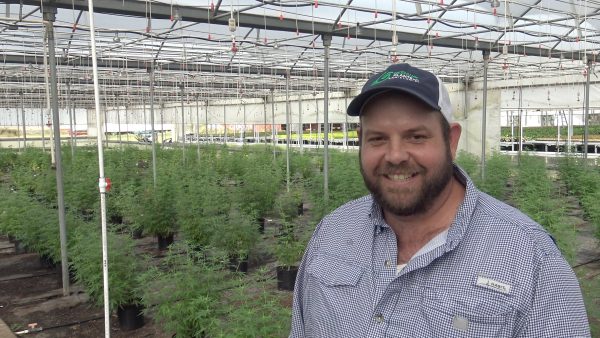 “This is the closest thing you’ll have in Alabama to marijuana,” says Hegeman, a hemp farmer and president and co-owner of Greenway Plants.

For the first time in almost 90 years, it’s now legal to grow hemp in the U.S., including in Alabama. The passage of the 2018 Farm Bill removed hemp off a list of drugs the federal government says have a high potential for abuse and no accepted medical use.

Richard Banks
Hegeman and staff experimented with a number of varieties of hemp, including these plants, to test their viability in extreme conditions.

Hemp and marijuana are very similar. They’re the same species of plant, but the principal difference is the amount of THC in the plants at harvest. THC is the psychoactive ingredient that naturally occurs in both plants. Marijuana is often harvested with THC levels at or above 20%. In both Alabama and at the federal level, hemp cannot have a THC concentration of more than 0.3%.

That means that when it comes to hemp, Hegeman says, “You cannot get high off of it.”

What hemp does offer is food, such as its seeds, fiber for clothing, even building materials. It also is used in CBD oil, which is growing in popularity. In Alabama, about 90% of the hemp raised in 2019 was expected to be grown for CBD, which, proponents say helps lessen ailments like anxiety and inflammation.

A Boost for Growers

As for farmers, they may be able to earn additional income growing hemp, which was a big reason the federal government and Alabama legalized it.

“I think it opens up a door for a lot of [farmers] who maybe aren’t making money with some of the other crops,” says Katelyn Kesheimer, an assistant professor at Auburn University and an extension specialist with the Alabama Cooperative Extension System. “I think it’s a good way to diversify what we have here in Alabama.”

Kesheimer explains that farmers can consider hemp another arrow in their quiver, using it, for instance, when its sale price is high and that of other crops is low. Also, because of its hardiness in many types of soils and harsh microclimates, hemp can be grown on acreage that may not be suitable for other crops, such as cotton, corn, and soybeans.

But Alabama hemp farmers face a number of challenges, including that there aren’t enough processing facilities throughout the state to handle what’s being grown. Perhaps the biggest hurdle, though, is there’s a dearth of research on how to grow the crop and control pests. That’s in large part because hemp was illegal for so long.

“With hemp, we don’t have a lot of research on it. I found myself saying a lot, it’s the Wild, Wild West. We don’t have the research and the control methods. It’s just kind of a big learning curve for us as specialists,” says Kesheimer. “We’re still figuring out how to grow it. So that’s an added frustration for a lot of the growers in the state.”

Even though it’s now legal, hemp is still tightly regulated. In Alabama, as in many other states, farmers and processors go through a detailed application process before being licensed. Then, just before harvest, state regulators visit each farm to check that the THC content of select plants is under the legal limit.

Bob Plaster, assistant commissioner of the Alabama Department of Agriculture and Industry, the agency charged with overseeing hemp regulations, says if just one plant tests over the limit for THC, then all the hemp plants in that field or greenhouse might have to be destroyed.

Even with the regulatory hurdles and lack of knowledge about how to grow the crop, interest in hemp continues to grow. Almost 600 farmers have been licensed to grow hemp this year, up from 182 licensees last year.

There’s potentially a lot of money in hemp farming. U.S. hemp industry revenues in 2018 were more than $1 billion, a figure that’s expected to grow significantly. Accordingly, those involved with hemp in Alabama and elsewhere remain optimistic about the crop’s prospects.

“It’s a viable crop for our state,” Hegeman says. “It’ll bring in revenue and give the farmers another option that they didn’t have before.”