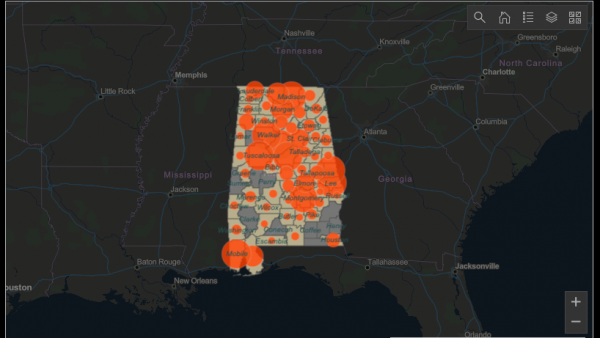 A screenshot of the Alabama Department of Public Health's coronavirus map on March 30, 2020

If you’re following the coronavirus pandemic, you’re probably seeing a lot of numbers: confirmed cases, number of tests, deaths. The Alabama Department of Public Health has a map to keep track of it all.

But if you’re tracking the coronavirus numbers carefully, you might notice they don’t always move the way you’d expect them to. For instance, the number of confirmed cases goes up while the number of tests don’t. Deaths are reported in the media, but they don’t show up in the state’s total.

It’s all a product of how the state’s numbers are gathered and the time it takes to ensure they’re correct.

“In public health we have to all make sure that we’re counting things the same way,” Dr. Scott Harris, Alabama’s Public Health Officer, said at a press conference last week. “We have fairly precise processes and definitions so that we all make sure we are counting the same things in order to compare numbers from one state to another or nationally with other countries.”

So while some hospitals or local offices have announced COVID-19 deaths, the state takes time to investigate to make sure those deaths are, in fact, coronavirus deaths as defined by the public health community. He likens it to the way flu deaths are recorded.

Complications from the flu are more likely in people with chronic heart and lung disease. If someone suffering from flu dies, investigators have to determine whether that was the cause and not, for example, a heart attack. That’s the kind of work epidemiologists are doing right now around the coronavirus.

“It does take a little bit of time to review medical records, to talk to people who are caring for that patient,” Harris says.

The state’s map draws a distinction by listing “reported deaths.” These are all deaths in which the person tested positive for COVID-19. A separate category called “died from illness” represents deaths that have been reviewed by state health officials and the corornvirus was the cause of death.

Other discrepancies come from an incomplete picture of the situation on the ground. Both state labs and private labs test for the coronavirus. While all private labs are required by law to report positive tests to the state within four hours, not all report negative tests. So the total number of tests performed is likely higher than what’s displayed on the state’s website. Harris says he’s confident they are capturing all positive tests.

Because it takes time to compile and standardize statistics, the numbers are, in a sense, a look at the past. On Friday, Harris reported a hospitalization rate of 10%, but says he believes the actual percentage is higher. Reports of the number of hospitalizations at UAB Hospital alone suggest Harris is correct.

It’s not just Alabama that deals with statistical noise. Mortality rates from the coronavirus have been reported as high as 10% in Italy and as low as 0.5% in Germany. The distance between those numbers will likely shrink as more testing is performed and more data is gathered.

Alabama’s pandemic picture is a work in progress too.

Updated 3/31/20 to include information about “reported deaths” and “died from illness” categories.