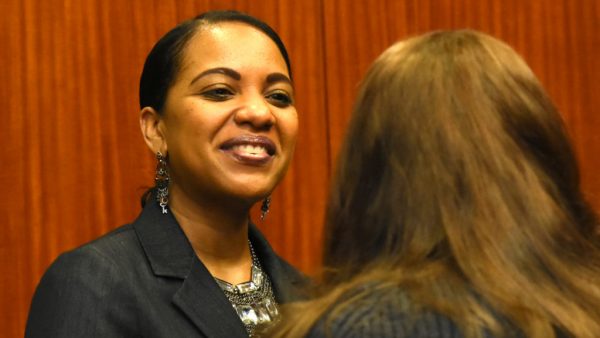 “Can you get us a good deal on a Toyota?” Knight asked, referring to her long tenure with the automaker.

“Not anymore,” the Montgomery native said as the boardroom burst into laughter. “Not anymore.”

While Brown can’t provide the hook-up for a fleet of motor vehicles, county manager Tony Petelos calls her “the missing link” in the county’s efforts to escape from the consent decree on personnel practices with which it has dealt for nearly 40 years.

The county has been under the consent decree since 1982, after plaintiffs sued alleging that the county and other defendants had been discriminating based on race and sex with respect to recruitment, hiring, assignment, promotion, discipline and other terms and conditions of employment.

Brown’s voice was a bit raspy, as she had a slight cold. But her enthusiasm to have returned to her native state was evident.

“I’m really happy to be back here,” she said. “The last time I was here, I was not an adult. I was at Tuskegee University. I’ve been at different companies since then. I’m just really looking forward to working with all of you and serving the residents of Jefferson County.”

Brown earned a bachelor’s in chemical engineering from Tuskegee and a master’s in business administration from Indiana University. She spent the past 14 years at Toyota Motors North America (formerly Toyota Motor Sales) in various roles. Most recently, she served as the director of the Academy of Learning Technology.

Brown served as a diversity and inclusion champion at Toyota and spearheaded its first three Innovation Fairs. She was invited and installed on the board of trustees for Goodwill of Southern Los Angeles County in 2014. She worked on its workforce planning committee before relocating to Dallas, Texas.

Petelos said the county’s new HR director was over equity inclusion at Toyota.

That’s a “very big deal in Jefferson County because of the consent decree,” he said. “Also, she has a good background in the area of training. With all the new employees coming in, we need to be training them and set down processes.

“She’s process-driven. That’s what we need, to have an HR department that is very thorough, that has a process to get things done in a timely manner,” the county manager continued. “Throughout the past several years, we’ve been building the HR department, making it stronger, better. With the consent decree, we’re limited in what we can and can’t do.”

Petelos said Brown is coming in at a perfect time for the county as it nears a possible exit from the consent decree. The county’s next status update is coming in a few months.

“We’re very excited about this in that she brings the talent that we need the most at this point in time in the county,” he said.