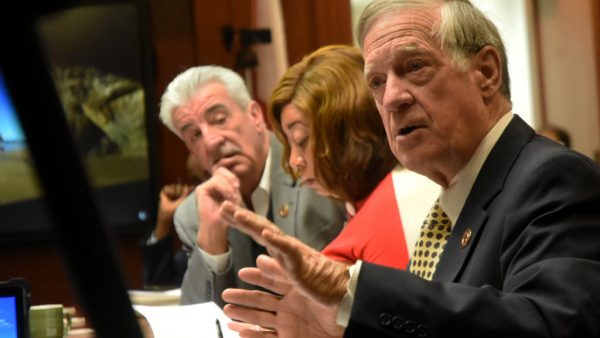 Travis Hulsey was a bit late for the Jefferson County Commission meeting this morning at the courthouse in Bessemer.

“I got caught up in some traffic,” he said later.

Upon arrival, Hulsey learned that his request for convenience fees on credit and debit card use for over-the-counter payments to the county’s Revenue Department didn’t face the traffic jam it did two weeks ago. It passed on unanimous consent along with 49 other resolutions.

The resolution that passed was Hulsey’s original request of a 1% convenience fee, with a $1.95 minimum. Hulsey, who slid over from his post as director of revenue to be interim chief financial officer, said he talked with County Manager Tony Petelos and Commissioner Joe Knight, chair of the commission’s finance committee, about his findings on a couple of suggested alternatives.

“One was a cap and the other was a waiving of the fees. Our (credit card service) providers were not able to provide that programmatically. The only option was to do the convenience fee or try to stop allowing credit cards altogether once we ran out of budget funds,” Hulsey said. “This, to me, is the best option. It gives the customers an option. They also have the option of paying by cash or check if they so desire to avoid the convenience fee.”

Commission President Jimmie Stephens again expressed his objection to the convenience fee, saying it was “double taxation” on taxpayers.

Among other actions, the commission approved an agreement for resurfacing Group 1 of three roads in Fairfield this year – Valley Road, Aaron Aronov Drive and Rutledge Drive. The $1.8 million contract is part of the county’s agreement with various municipalities regarding through-roads.

“We’re working on Groups 2 and 3 because we have sections of Birmingham, Homewood and Shelby County on some of those roads,” said Heather Carter, the director of Roads and Transportation. “We have been talking with other jurisdictions about cost-sharing for their portion so we’ll do theirs at the same time, and they’re trying to get themselves organized. We’re just waiting on them to get the other two through.”

Commissioner Lashunda Scales, whose district includes Fairfield, was excited about what the road improvements will mean for that financially challenged city.

“We look at it as not only safety for our citizens but the economic revitalization that the city of Fairfield is desperately in need of,” she said. “We need for that city to be independent and, most of all, economically sustainable. The way you’re going to do that is we’ve got to repair those roads. Infrastructure is everything.”

Commissioner Joe Knight told his fellow commissioners that he received preliminary confirmation that the City of Birmingham will financially support efforts to bring the International Police and Fire Games to the Birmingham area in 2025. He said he expects to soon present a resolution with a pledge of support for the event.

Knight said that event could have a $7 million economic impact, with 10,000 athletes coming from across the globe.