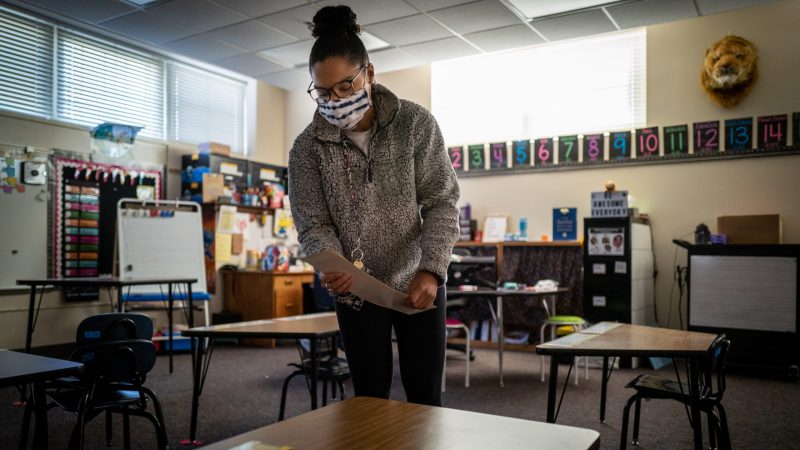 Gov. Kay Ivey said this week the state’s goal is to get students back in the classroom.

Schools across Alabama have offered a remote learning option since March because of continued community spread of COVID-19. But the longer schools are disrupted, the more likely kids will suffer academically, according to Ivey.

She said strong health protocols can keep kids safe from the virus.

But as the number of new COVID-19 cases continues to rise, at least two school systems, Birmingham and Montgomery, have opted to return to remote learning next week. Still, some school leaders support Ivey’s push for in-person instruction.

“Oh, I completely agree,” said Avis Williams, superintendent of Selma City Schools. “So I appreciate her urging us to do so.”

But students in her school system are still learning virtually — and she said surveys show that’s what most people there want. The pandemic, she added, has not been brought under control. Williams is hopeful students can return next semester.

“Our principals are ready. Our buildings are ready,” Williams said. “We’ve got cleaning protocols in place as we do consider returning to face-to-face instruction.”

Some parents and teachers have expressed concern on social media.

Birmingham resident Princess Henderson knows that by keeping her two school-aged children at home, they miss vital one-on-one instruction and attention. Her 6-year-old son has struggled academically with virtual learning. But she said she has to weigh that with the safety risks.

“It’s so many kids getting sick now,” she said.

She worried that if her children were exposed in school, that would have forced her to have to isolate. She recently started a new job as a medical assistant and taking time off just wasn’t an option.

“I don’t even have any sick time,” she said. “I would have probably gotten fired.”

Jennifer Brunner, an English teacher at Clay-Chalkville High School in Jefferson County, said she doesn’t have a problem with Ivey’s push as long as students have a virtual learning option.

Brunner has some students in her classroom. Instruction at Clay-Chalkville is blended with some students at school while others log in from home. She said she feels good about safety measures her district has implemented. But she believes she’s in the minority. She senses more angst among teachers at other schools.

I constructed this myself and spent my own money to protect myself. Even though this is an airborne virus and highly unlikely to be transmitted through surface contact, MPS has done nothing to mitigate air quality. pic.twitter.com/f1rAl3qdsu

Brunner said the biggest concern with in-person learning is staffing. She said there was one day when 11 teachers at her school were out and they could find only one substitute. It was doable only because many students are on computers. But, she said, it’s far from ideal.

“When you run into situations where a large number of staff have to quarantine because of exposure, there’s just not going to be anything to do with the kids. You know, at some point we’re going to run out of adults in the building,” she said.

Check out the Alabama Department of Education’s COVID-19 Dashboard here.