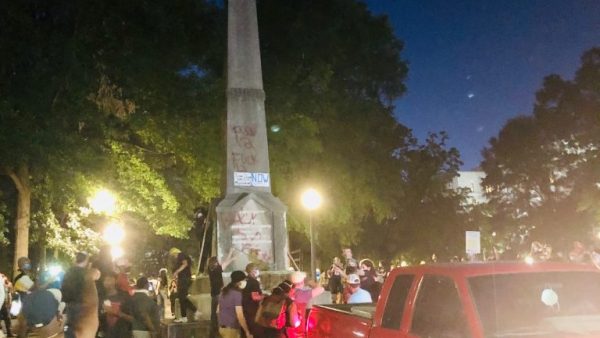 Protesters with a truck and chains try to topple a Confederate monument in Linn Park during a protest.

Protesters who gathered for a demonstration in Linn Park on Sunday night defaced monuments in the park and, as they left, smashed windows and vandalized buildings along downtown streets and set several fires.

Police, who had taken a hands-off stance even as the protesters defaced monuments in Linn Park, moved in after the crowd began its destructive trek through downtown. It was unclear after midnight how many people were still downtown or the extent of the damage.

Several hundred demonstrators had gone to Linn Park after an earlier, peaceful protest in Kelly Ingram Park.­ Jermaine “FunnyMaine” Johnson, a local comedian, during the first rally, dubbed “Birmingham the World is Watching Rally for Justice and Peace,” had told the crowd he was going to Linn Park to topple the Confederate Soldiers and Sailors monument there.

That’s what the crowd attempted to do, using a truck and chains. That was after they had defaced it by spray painting messages and taking out chunks with implements such as shovels. But the monument still stood.

However, some members of the crowd were successful in topping the statue of Charles Linn, one of Birmingham’s founders and a former Confederate Navy officer, from its perch deeper into the park. Some in the crowd also had scrawled graffiti on two statues on either side of the Confederate memorial – the Spirit of the American Doughboy and the memorial to Spanish American War Veterans.

As the crowd became more rowdy, Birmingham Mayor Randall Woodfin arrived shortly before 9 p.m. and asked people to peacefully disperse, giving his word that the statue would be gone in 24 hours. That could be tricky since the state has a law banning the removal of historic monuments.

Using a bullhorn, Woodfin referred to violence elsewhere in the country and asked those present “to stand down.” Many of those who gathered around the mayor shouted “No!” and some began chanting “No Justice, No Peace!” and “Stand With Us!”

Johnson, standing next to Woodfin and trying to calm the crowd, took the bullborn and said, “Our mayor is with us. … He deserves a chance to be heard out.”

Once again with the bullhorn, Woodfin struggled to get attention and said, “I have a course of action I think you’ll appreciate. Allow me to finish the job for you” and he repeated his request that the crowd disperse.

That received a mixed, noisy reaction and Woodfin then engaged in a quiet discussion with Johnson, with Jefferson County Commissioner Sheila Tyson listening and sometimes participating. Finally, Johnson took the bullhorn again and said, “The city is in a situation legally where they can’t sit by and let us just do this even though some of the city (council) members want that bitch to come down.”

The dilemma is letting them take it down legally and not us taking it down …” Johnson said as Woodfin nodded.

Johnson said he was willing to do that, “but if that (expletive) ain’t down by Tuesday morning, I will see y’all here at 12 o’clock noon Tuesday.”

Later Woodfin said, “I gave you my word, Tuesday by noon.”

The monument has been a bone of contention for the city and the county for year.

The city erected a plywood wall around the Confederate monument to obscure the plaques on it in 2017, effectively challenging a state law that makes removal of historic monuments illegal. The state attorney general sued the city of Birmingham. Last year, the Alabama Supreme Court upheld the law, and later the city was fined $25,000.

The crowd ripped down that plywood before attacking the monument Sunday night. None of the buildings that border Linn Park were defaced during the protest. Johnson had warned the crowd to focus on the Confederate monument and nothing else.

Police presence was sparse in Linn Park during the protest. Police had formed a line on the southern edge of the park, but those officers later left and police blocked Park Place and other roads around the park.

After people were asked to begin dispersing, they did so slowly. It was as they walked along downtown streets that they turned violent. Fox6 News broadcast live video of people in the crowd smashing windows of the Wells Fargo building, the Harbert Center and other buildings. It showed people looting the Alabama Power Co. museum and setting fire to buildings at and near the People’s Bank. The Chick-fil-A building on 5th Avenue North appeared to be damaged and the sprinkler system was gushing in the nearby Zoe’s Kitchen.

Protests have been raging every night across the country since the death of George Floyd at the hands of police in Minneapolis on Monday. There have been several demonstrations in Birmingham, but Sunday night was the first time protesters turned violent.

A protest in Hoover Sunday resulted in several arrests, as did one held there Saturday.

For the earlier protest, an integrated crowd filled much of the historic Kelly Ingram Park. Many of those in attendance held signs bearing messages that included “I Can’t Breathe,” “Black Lives Matter” and “Jesus Didn’t Support Injustice and We Don’t Either.”

The event featured more than 20 speakers, and Johnson spent some of his remarks going through a list of local places special in civil rights and African American history that “we can’t tear down.” Then he asked crowd members to “not” join him at 7:30 in Linn Park and gather at the Soldiers and Sailors monument there. While “the whole world is on national TV, tearing stuff down, we need to tear something down tonight,” Johnson said. “They need to see Birmingham, the home of the civil rights movement, tear some … down tonight.”

U.S. Sen. Doug Jones and Woodfin were the rally’s final speakers, and Jones called for unity in the struggle to dismantle injustice. “Folks, we must pass this test together,” he said. “To pass this test, we cannot look with disdain or violence, but with conviction and urgency. To resist tearing down mere symbols, even if they are Confederate monuments, and focus instead on breaking down the barriers and the laws and institutions that have perpetuated inequality and injustice – that’s what we have to bear down (on).”

As Jones left the podium, there were chants of “Tear it Down” and those chants continued for a few moments as Woodfin came to the podium.

“What we fight together is injustice, and so I want you to hear me: This is not the time for lawlessness,” Woodfin said.