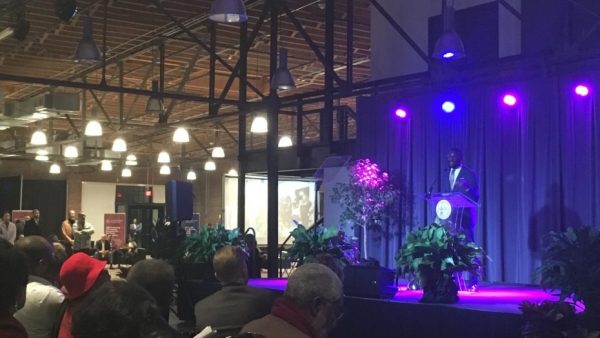 Birmingham Mayor Randall Woodfin marked the halfway point of his first term in office Tuesday evening with a presentation highlighting his administration’s accomplishments and broadly gesturing toward his plans for the next two years.

Tuesday’s event, which took place at the downtown Birmingham venue Haven, followed a similar presentation that took place in March, also titled “The Big Picture.” Both events were intended to provide an update on the Woodfin administration’s strategic initiatives. But while March’s event featured presentations from a slew of city officials, Tuesday night’s presentation centered on a half-hour speech from Woodfin.

For the rest of the evening, attendees were encouraged to mix and mingle using the mobile app Mixtroz, which was developed in Birmingham. Representatives of the microtransit service Birmingham Direct — a partnership with ridesharing company Via, which launched Tuesday morning — were also present, handing out coupons for the new service and displaying one of the program’s Mercedes vans.

Woodfin’s speech mostly summarized his administration’s recent achievements, often describing them in terms of how they might help a single mother or grandmother living in one of the city’s neighborhoods. He pointed to the city’s neighborhood revitalization fund, which is intended to address “quality-of-life issues” for Birmingham residents. “What initially started out as a $1.6 million investment has now gone to $7.2 million in the neighborhood fund,” he said.

That money, he added, had gone toward paving 16 miles of roads, tearing down over 700 dilapidated structures and repairing over 27,000 potholes. “If I can nerd out about it, that’s really 27,516 potholes,” he said. “Don’t ask me why I know that number.”

Woodfin also addressed public safety in the city, insisting that despite high-profile crimes such as the murders of Birmingham Police Sgt. Wytasha Carter in January and 3-year-old Kamille “Cupcake” McKinney in October, “We have seen a double-digit decrease in all crime categories — crimes against persons and crimes against property.” Those decreases, he said, were the results not only of the Birmingham Police Department, but of the public health-centered approach to violent crime embodied by his administration’s “Peace” strategy.

Other recent highlights of his administration, Woodfin said, included an overhaul of the city’s 3-1-1 center, a new program issuing pardons for low-level marijuana convictions and the Birmingham Promise program, which will fund apprenticeships and scholarships for students of Birmingham City Schools. He also pointed toward efforts to revitalize business in the downtown Ensley area.

Going forward, Woodfin said, his administration would focus on efforts to turn the city into a “hub for women- and minority-owned businesses, and to do what is necessary for them to be successful,” a goal that a series of grants approved by the City Council Tuesday morning are designed to address.

The environment, he added, would be a major concern for the back half of his first term.

“We’ve got a whole lot more environmental justice and sustainability issues to address within the next two years,” he said, “but we’ve laid the groundwork and foundation to address these environmental issues in our city.”

“In the coming two years, there are many more issues to address,” he added. “Homelessness. Recycling. Many other ways that this government can be more efficient, and many other things individually and collectively as a city … I ask that you all stick with us as an administration, that you get involved and participate … All of us call this city our home, and that’s the big picture.”