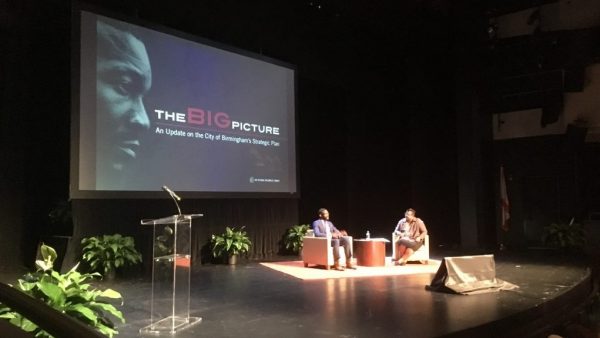 Birmingham Mayor Randall and his team updated the public on progress toward goals during an event branded The Big Picture.

A black-and-white photo of Birmingham Mayor Randall Woodfin — shot in profile, eyes fixed in an expression of steely determination — hovered over the stage of the Alabama School of Fine Arts’ Dorothy Jemison Day Theater on Thursday night. But beneath that photo, seated casually in an onstage armchair, the actual Woodfin seemed comfortable ceding the spotlight to members of his team, watching quietly as they presented updates on his administration’s strategic plan — “The Big Picture,” as the evening was branded.

“Tonight, our goal is very simple,” Woodfin said at the beginning of the event. “It is to have and create transparency for you all, to take a look at and have an update on these strategic initiatives we’ve been working on … We want you all to be able to walk out of here tonight and, whatever your (social) sphere is … share with them what we’re doing, because you have the power to amplify what your city’s doing on your behalf.”

But, Woodfin said, he was also taking the opportunity to highlight members of the team he had spent the past 18 months building. “I think it’s important to amplify the voices who are driving (these) strategic initiatives,” he said.

“Our goal is to reach 1,000 officers for the city of Birmingham by the end of 2020 so we can start preparing for the World Games here in Birmingham,” he said. “It gives us something to look forward to and to work for.” Next year, he said, the number of police academies the city offered annually would increase to four. The department is also in the process of re-hiring 30 retired officers, Smith said; with 12 “lateral hires” being transferred from other departments.

“The number of officers who would have gone other places are staying right here with the city,” he said.

Smith also said the city plans to install 30,000 new LED streetlights in the city. The absence of lighting, he said, “can sometimes breed crime or help criminals in their escape.”

But most importantly, he said, is the development of a “real-time crime center … where we plan to leverage all of our technology and bring it to one central hub.”

“Everything we have will be working together so that we can get a very clear picture of what’s going on throughout the city and we can get real-time information out to our officers, so they know exactly what they’re looking for and who they’re looking for,” Smith said. That center would involve technology such as the predictive software PredPol, ShotSpotter technology, and the city’s recently approved surveillance cameras.

After Smith spoke, Woodfin repeated his adage that the city is “not going to arrest our way out of crime,” and he pointed toward his four-year “Peace” strategy, “a framework that uses a public-health lens to target violence prevention and re-entry from incarceration.” That plan, he said, would target systemic causes of violence “with roots that run generations deep.” A copy of the Peace strategy is available on the city’s website.

Edwin Revell — the city’s director of planning, engineering and permits — spoke next, pointing to the city’s slate of ongoing capital improvement projects as examples of “efforts where we’re working with people to make places better.”

Part of that, he said, was thanks to Woodfin’s newly established Neighborhood Revitalization Fund, which he said had contributed $8 million “this year alone” to be invested in street resurfacing, street patching, and sidewalk improvements — basic quality-of-life improvements that would “also serve as incentives and triggers and catalysts for private investment,” he said.

A spreadsheet of the city’s 260 capital projects is available on the city’s website.

Revell also highlighted the city’s recently implemented “Complete Streets” ordinance, which was passed in March and is intended to make city streets accessible to pedestrians, bikers, bus riders and the disabled. “We’re committed deeply and strongly to making sure that as we design, build, construct and maintain our streets and sidewalks that they become places that can be used by all users,” Revell said. At this, District 5 Councilor Darrell O’Quinn, who heads the transportation committee and who was a vehement supporter of the ordinance, applauded enthusiastically from the audience.

Rachel Harmon, the deputy director for talent development with the Department of Innovation and Economic Opportunity, said that her position had only recently been created to address the issue of workforce development. “We know that across every neighborhood in our city, talent is distributed equally but opportunity is not,” she said.

She pointed to Birmingham Can Code, a partnership launched in conjunction with Apple, Birmingham City Schools and Lawson State Community College, which taught 100 Birmingham students basic coding skills and has led to coding camps throughout the city’s school system, which will reach an estimated 400 more students.

Other initiatives she highlighted included the city’s Talent Investment Program, Talent Acceleration Program and Talent Optimization Program (Tip, Tap, Top), in which companies can invest directly in educating the local workforce; those programs have so far led the Birmingham-based grocery delivery service Shipt to commit to hiring 881 new local employees; Harmon said that the city plans to expand the program this year.

Speaking after Harmon, Woodfin described the city’s role in workforce development as a “chief convener, to get these folk in a room and say, ‘How do we invest in our young folk, in our talent across the city … to make sure if an employer is creating a spot, Birmingham residents can get into that spot. That’s our job.” Woodfin added that the city would increase its efforts to bolster apprenticeship programs for high school graduates over the next 18 months.

“My job did not exist a year ago,” said Tene Dolphin, the Department of Innovation and Economic Opportunity’s deputy director for business diversity and opportunity. “My position was created because we are laser-focused on becoming the destination for women and minority entrepreneurs to launch their businesses.”

Her first year on the job, she said, has been focused on “laying the groundwork philosophically” to create an inclusive economy. Through the department’s Bold grant initiative, she said, business development organization Create Birmingham would be able to expand Co.Starters, its entrepreneurial training program. Bold is also funding a partnership between the city and the Dannon Project to create a path for those recently released from prison to join the workforce.

Dolphin also said that her office would soon focus on creating a “scorecard,” an internal assessment to determine “how the city was supporting women-owned, minority-owned, disadvantaged businesses.” That scorecard, she said, would ideally be finished by the end of the year.

Cedric D. Sparks, the mayor’s chief of staff, is typically a reserved presence at City Council meetings. But on Thursday night, his blunt assessments of the culture at City Hall drew a fair share of laughter from the audience.

When Woodfin’s administration took office, Sparks said, they “dug deep into longstanding practices” at City Hall. “Some are good, (and) very candidly, some are not so good,” he said. “(In response) there were a few cultural norms that we instituted. We said we decided to be an institution with no mess, no junk, no drama. And if you brought it, it had to go and you had to go with it.”

Sparks said Woodfin’s administration had also instituted several “non-negotiables” when it comes to interacting with the public. “We believe in, ‘Call people back,’” he said. “We believe in, ‘Respond to folk’s emails. ‘We believe if you see a need, fill that need.”

Sparks’ humor dimmed slightly when he addressed what the administration deemed was the “elephant in the room” — the city’s unfunded pension liability. “The mayor decided early on that, though it would be hard and not very popular, that he would do right by our employees and deal with this issue head-on. He made it a priority early,” Sparks said, adding that Woodfin meets weekly with the city’s pension board to develop a plan.

The pension would have an impact on the upcoming FY 2020 budget, Woodfin added, comparing it to a “need-only Christmas,” where socks, not toys, are the gifts. “That’s how this budget’s going to be,” he said. “It’s going to be lean. If it’s not focused on basic services and infrastructure and pensions, everything else is a distant third priority.”

“We’ll talk about it later,” he said.

Denise Gilmore, the senior director of the Mayor’s Office of Social Justice and Racial Equality, emphasized that her office is designed to bring members of the Birmingham community together “to integrate their ideas, knowledge and expertise… to address complex social challenges with innovative solutions.” The recent creation of the LGBTQ+ Advisory Council and the Human Rights Commission are two prominent examples of this, she said, as is the creation of a Birmingham Civil Rights Institute Accountability Task Force, a “diverse group of community and civil leaders” with the mandate of monitoring the Birmingham Civil Rights Institute “in the wake of the fallout from the Angela Davis controversy.”

Her office was also working on an initiative to create a Civil Rights national monument in collaboration with the National Parks Service, as well as assisting the Jefferson County Memorial Project in the process of claiming its monument from the Equal Justice Initiative’s National Memorial for Peace and Justice.

“I think you all know that there’s been a lot of intense conversation around social justice issues in our community lately,” Woodfin said after Gilmore finished her presentation. “There’s something that lies underneath all of those conversations. I believe it’s a lack of dialogue and engagement. Many of you have told me, even before I became mayor, that you have felt disconnected from the city, from your local government, from Birmingham. I didn’t take it lightly … If I was being honest, it’s probably one of the top things that keep me up at night.”

In response, he said, his office had “come up with a program that I feel is pretty dope.” With that, he announced “A Citizen’s Experience,” a free, seven-week program slated to educate citizens on the inner workings of Birmingham’s government. ACE will be open only to Birmingham residents and will begin in June. Applications will be accepted between April 4 and 29. “This is about your experience,” he said. “It’s a citizenwide leadership initiative to bring people into a deeper dialogue, a deeper connection to (Birmingham). We want you to be able to understand the civics of government, the A through Zs … We want to encourage you all to be on the solutions end.”

“I just want you to walk away with this,” Woodfin said at the end of the evening’s presentations. “We don’t have to be any other city. We just have to be the best version of ourselves… so I hope you will join us in making sure that we become the best administration for you all.”

The company building a seven-story student housing development near UAB received permission from the city this week to forgo some property and sale taxes for the project. The county is now set to hear a similar request later this week.