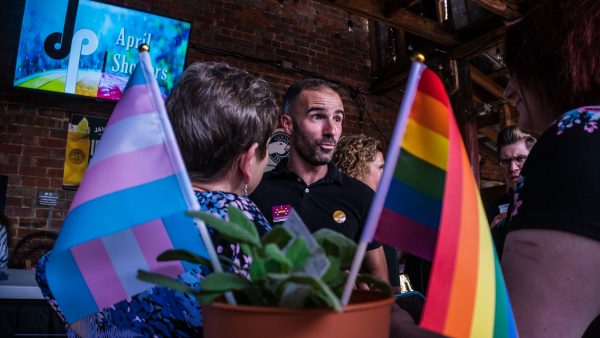 Daniel Walker of the Gay, Lesbian & Straight Education Network in Huntsville and other volunteers speak at an event about safe spaces and equality for students.

Many students in Alabama who identify as LGBTQ say they don’t feel safe at school. Most, according to one survey, have been assaulted or harassed. Recently, an openly gay Huntsville teen who was bullied took his own life.

Organizers of a proposed charter school for LGBTQ students in Birmingham say they want to establish a place where young people can feel secure.

Jennifer Sumner, whose 16-year-old son is transgender, says the school is needed. It’s been difficult for her to find a school that’s a good fit for her child.

“I have moved around the state of Alabama to find a school that is supportive,” she says.  “The last few months, we’ve had to homeschool him.”

She says her son has been bullied and called names, and there are other daily challenges.

“You would think that somebody who has already transitioned would be allowed to use the restroom that they identify with,” she says, “but that is not the case without a real struggle, and sometimes it still doesn’t happen.”

Stories like Sumner’s aren’t uncommon, according to Amanda Keller, director of the Magic City Acceptance Center. It’s billed as a safe space with a no-judgement atmosphere for LGBTQ youths.

The idea for the charter school grew out concerns for young people who regularly come to the center. Keller also points to a state snapshot from the Gay, Lesbian & Straight Education Network that shows an increase in harassment reported by LBGTQ youths in school.

The bullying and lack of support for LGBTQ students takes a toll, Keller says. Some drop out. Others even take their own lives.

“This conversation is very familiar to us, and we have lost people who have physically been in our space,” she says. “Every single time our question to ourselves is ‘What could we have done differently? What can we do better?”

Keller says a safe affirming school can help LGBTQ youths through some of their struggles.

Organizers haven’t chosen a location, but Keller says, it will be somewhere in Jefferson County.

“I have no doubt that there are some families who will even move closer to Jefferson County so that their youth can attend this school, because we have people across the state and families who report that they just cannot find safe schools for their children,” she says.

Dwight Jinright was a teacher for 12 years in Alabama. Now he’s working on a doctorate in education researching LGBTQ issues in the classroom.  As a child before he came out, he says he was bullied.

“Especially throughout junior high school  — I mean it was bad,” he says. “I was constantly bullied – fag, sissy, homo – before I knew what some of those terms meant myself.”

Jinright wasn’t a fan charter schools, but he’s changed his mind on this one.

“When I see that in typical public schools we’re not necessarily doing the justice for all students, then there becomes a niche,” he says.

Keller says organizers plan to submit the charter school application this fall. She says they’re getting calls from people who want to work at the school or place their children on the waiting list. The new school could open as early as August 2020.