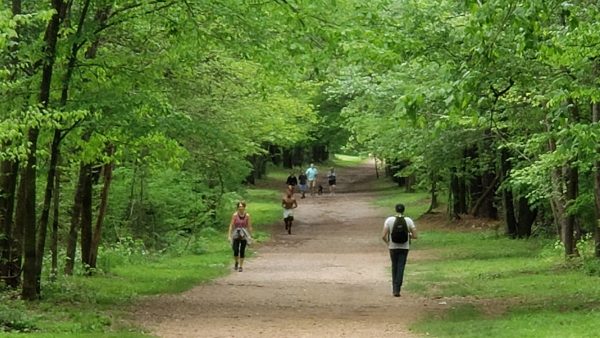 The High Ore Line is a trail that starts in Midfield. Walk about a mile down, and you will hit a new entrance to Red Mountain Park. It is part of the master plan for the Red Rock Trail System, a network of 750 miles of trails, parks, bike lanes and sidewalks.

On a typical weekend, Red Mountain park is full of bikers, hikers and dogs.

Matthew Landrum, who visits the park often with his wife, says they love the dog park. “We bring our little dog and he loves it here,” Landrum says.

He says he did not know about the new trail and entrance, but he is excited. He lives opposite to the main entrance to Red Mountain Park off Lakeshore. He says the new entrance will be more convenient.

Freshwater Land Trust, a conservation non-profit, worked with the city of Birmingham and property owners to build the trail connector.

Funding for the trail came from a $10 million grant including state and city money.

Carolyn Buck, director of the Red Rock Trail System, says having these new trails in Birmingham offers a new way to commute around the city. But Buck says it can also help people learn more about Jefferson County. For example, there are a handful of old mining houses visible from the trail dating back to the 1800s.

“It’s really an opportunity and gives you a reason to get out there and explore and there is some great places in this county,” Buck says.

The Freshwater Land Trust expects to open the connector trail in June.