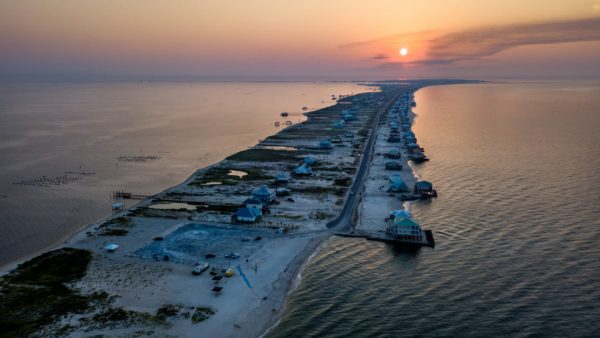 The sun rises on Dauphin Island, which is being eroded by rising sea levels and intense storms. Erosion is more extreme along a seawall (on right).

Alabama’s a long way from the South Pole, but Jim McClintock knows the places are connected. For decades, the UAB researcher has been witnessing effects of climate change on the polar region. He sees that his state is starting to feel the impacts, as well, and predicts greater changes ahead.

From his vantage point as a UAB polar biology researcher, McClintock has seen the future in vast chunks of ice breaking off from the southern continent and he’s seeing how it affects sea levels on the Alabama coast.

He sees how some small and large flora and fauna that used to thrive in the polar cold are suffering as temperatures rise. They either adapt to the warming waters and atmosphere or give way to others that expand their habitat southward.

Scientist Ken Heck not only sees the sea rise onto beaches near the Dauphin Island Sea Lab he directs, but also watches the movement of subtropical species such as mangrove trees into the northern Gulf of Mexico.

Parrot fish, black snapper and green sea turtles also are extending their range northward, and with the intrusion comes change. Heck studies sea grass meadows, which provide valuable protection and food for Gulf water life. Some sea grasses have begun to disappear as green sea turtles mow them down like goats. Mangrove forests supplant sea grasses as the Gulf warms to their liking. He is watching to see how water life responds to the change.

McClintock said such changes were heralded by what he has seen at the polar region. The warmer habitat diminished the numbers of Adelie penguins, and king crabs that once found the pole too cold for survival now find it tolerable. Crabs mean dire implications for native creatures that have never had to grow protective shells against such crushing jaws, he said.

Ferne McClintock
UAB researcher Jim McClintock, with some of his invertebrate zoology students, holds a large adult blue crab. Blue crabs are at risk from climate change, such as by flooding of coastal waters after heavy rains to the north.

In Mobile County’s famed Bellingrath Gardens, horticulturists don’t put much stock in climate change, but slight deviations from the norm are puzzling, they admit. Chief horticulturist Chuck Owen noted warmer weather delays the popular chrysanthemum season by a week. And an intruder vine that apparently blew in with intense winds of Hurricane Katrina still pokes its way through the normal flora. They haven’t identified it and just call it the “hurricane vine.”

But while scientists carefully focus on such things, most other people don’t pay attention to gradual changes – until they can’t avoid them. So, incrementally, regular folks are beginning think about what can be done to soften effects of climate change and adapt to its projected march.

Climate changes naturally in vast cycles of time, but the accelerated rate of planetary warming in recent decades is what has astounded and alarmed most scientists.

Cement production, deforestation, and other factors are involved, but the steep ramp-up is almost entirely the result of burning carbon-based fuels such as coal, gas and oil beginning with the Industrial Age. The carbon dioxide spewed into the atmosphere traps the sun’s heat and raises temperatures in a greenhouse effect, so CO2, methane and other emissions are known as greenhouse gases.

Polar ice cores provide a record of earth’s atmospheric carbon dioxide back millions of years. “The concentration was never higher than 300 parts per million until you get to the Industrial Revolution, when it shoots up 25 percent,” he said. “It’s pretty convincing that there’s a significant human fingerprint on climate change.”

The government’s climate website acknowledges that atmospheric carbon dioxide has risen about 100 times faster than previous natural increases and continues an ever steeper climb. In 2015 the concentration of CO2 in the air exceeded 400 parts per million for the first time, and this year, the website documented another record high level of 411 ppm. According to the website, experts predicted that “if global energy demand continues to grow and to be met mostly with fossil fuels, atmospheric carbon dioxide will likely exceed 900 ppm by the end of this century.”

Michael Clemmer
Storm-battered piers are silent witness as relentless waves and wakes from ships headed to and from the Port of Mobile wash away a little bit more shoreline every day.

There are several primary and secondary results, according to academic and government scientists. Some regions are becoming wetter and others dryer. Sea levels rise when temperatures that expand the water melt glaciers and polar ice sheets. Warmer air leads to more intense, if not more, storms, with more rainfall per unit of time leading to more flooding. As increased carbon dioxide interacts with water, the oceans become more acidic, forcing shellfish and other species to adapt or die.

There are dire forecasts for the future of Earth, but there are some brighter spots. In developed countries, power companies and giant corporations are increasingly moving to renewable energy. However, sunny Alabama produces only 0.26 percent of its energy from solar power, last among states in the Southeast, whereas it is ranked 13th in the nation for solar potential.

There are other encouraging signs. For starters, nonprofits, governments, businesses, and individuals are seeing the need to build breakwaters and restore marshes to strengthen coastal shorelines. “Green” infrastructure and buildings are being incorporated into city planning to reduce excessive runoff and urban heat islands. The reduction of waste is, however slowly, becoming part of our culture.

Among other examples is a report that proposed specific ocean-climate actions could help provide up to a fifth of emissions cuts needed by 2050 to keep global temperature rise below 1.5 degrees Celsius. It was a finding of researchers and analysts representing 14 heads of governments and was a key part of a scientific report on ocean solutions published at the recent Climate Action Summit.

That’s 14 world leaders trying to make a difference. McClintock noted that only 20 countries came together and pushed for regulation of aerosol and refrigerant chemicals that were causing a dangerous thinning of the ozone layer above the South Pole. As a result of their 1987 Montreal Protocol, the ozone “hole” is closing.

That gives researchers some hope that perhaps enough of the world will unite to slow or stop the rise in fossil fuel emissions in time to keep the global warming from tipping too far into danger.

McClintock said his hope is that a plan such as the 2016 Paris Agreement, if fully embraced, would pull us back from the edge of the precipice.

Over the next year, BirminghamWatch will visit places in Alabama where ways of life have been affected as climate changes and look at what’s being done to mitigate or avoid the effects. This is the first in a series of four stories from Alabama’s Gulf Coast. Read about the impact climate change is having on Dauphin Island: here.