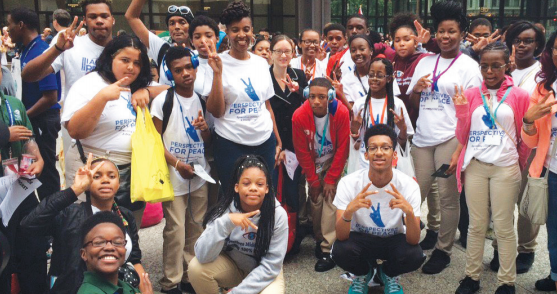 A Birmingham-area teacher is among four selected from across the country to participate in a national program aimed at “empowering their students to see peace as something practical and possible.”

Social studies teacher Ryan Adams of Chelsea High School, who focuses on Advanced Placement American History, is one of the next cohort of instructors to become Peace Teachers, a program of the United States Institute of Peace.

USIP is one of several federally funded organizations proposed for substantial cuts in President Donald Trump’s wish list for 2019, “An American Budget.” In the case of the USIP, the president wants to cut its budget almost in half. BirminghamWatch is examining possible impacts on Alabama if the president’s proposals – which Congress has the power to accept or reject – are enacted.

Under the Peace Teacher program, Adams joins teachers from Franklin, Tennessee; Hartford, South Dakota, and Silverdale, Washington, who “will spend the next school year bringing pressing international issues of conflict … to life,” according to a USIP press release, citing the Trump-Putin summit, annual summer protests in Iraq, and potential talks between the U.S. and the Afghan Taliban as examples that could be addressed.

Adams is excited about the prospect. “Every teacher at some point in time … got into this profession to make a difference,” he said. “If I can be allotted an opportunity to be able to … make an impact beyond just the walls of my classroom, honestly, for those who got into this profession for the right reasons, who wouldn’t want to take a shot at that?”

Teachers selected for the program, who began this year on July 26, “will receive training, resources, and support to strengthen their teaching of international conflict management and peacebuilding,” according to the USIP.

“We are delighted to announce our four 2018 Peace Teachers. As experienced social studies teachers, they are dedicated to helping their students become effective global citizens,” said Megan Chabalowski, who manages the program for USIP’s Public Education department. “We know from working with previous groups of Peace Teachers that this program will help them achieve that goal. It will give them and their students the knowledge, skills and perspectives they need to envision a more peaceful world and their part in creating it.”

This isn’t the first time USIP has worked with Alabama. For example, every year around Sept. 21, celebrated as International Day of Peace, the agency programs educational and outreach efforts. In 2015, Peace Day Challenge brought USIP to the state to work with a nonprofit leader who was inspired by the 50-year anniversary of the Selma to Montgomery March. That effort resulted in Montgomery school officials declaring Sept. 21 Peace Day districtwide. USIP also has in the past sponsored a Peace Essay Contest; some of the winners have been from Alabama.

So why does the president want to cut USIP’s budget?

First, USIP, despite close ties to the federal government, is actually an independent agency that formed around the notion that it is just as important to make peace as it is to wage war. The organization was created in the 1980s by members of Congress who were veterans and believed the study of peace was a key contributor to U.S. national security interests.

A spokeswoman who would only speak on condition of anonymity described the USIP as “a congressionally funded organization that is working to create a more peaceful international landscape for the U.S. … We are a really important way in which the U.S. deals with the rest of the world.”

USIP works in other countries but also works in the U.S. with government agencies, nonprofits, teachers and students to further discussions around conflict resolution and building and establishing peace.

While “An American Budget” does not propose completely eliminating USIP as it does with some agencies or programs, it does see the need to trim its budget. Specifically, the president wants to cut USIP’s funding from $38 million to $20 million.

“The Budget proposes to reduce Federal funding for the United States Institute of Peace (USIP), given its status as an independent nonprofit organization outside the Federal Government,” notes the budget’s Major Savings and Reforms section. “The Budget assumes that USIP, like any other foreign assistance implementer, would have to compete for more of its funding through interagency agreements with other Federal agencies, rather than rely on its direct appropriation as its primary funding source.”

The White House document goes on to explain its justification for the proposed reduction: “The Congress created USIP as an independent, non-profit corporation in 1984, but USIP’s authorization for appropriations expired in 2015. The Administration is continuing its efforts to streamline functions across the Federal Government, particularly those that duplicate the efforts of other Federal programs or the non-profit and private sectors. Consistent with this goal, the Budget request for USIP would support the Institute’s core operations and maintenance funding in 2019, but USIP would need to compete for funding for program work through increased interagency agreements with other Federal Government agencies. The Budget assumes that USIP would work closely with the Department of State, U.S. Agency for International Development, and the Department of Defense to leverage USIP’s independence and flexibility to help those agencies accomplish their missions. This would be achieved through additional reimbursable agreements where USIP can serve as the program partner, while continuing to streamline USIP’s operations and identifying opportunities for financial savings.”

Although USIP officials would not comment about the president’s proposal on the record, they did say that they continue to fight for their funding by staying in touch with Congress and the executive branch.

“We’re confident that the nature of our work is a cost efficient way to help support U.S. national security goals,” a spokesman said. “We continue to deal with members from both sides of the aisle and make the case about our programs, and as a result we are confident we’ll continue to be funded. But we don’t take anything for granted, which is why we’re constantly trying to demonstrate that value to members of Congress and to the foreign policy community.”

As Important to Teach Peace as War

“Certainly, teaching, especially AP U.S. history, we learn a lot about international conflict, the difference in winning the war and winning the peace, the objectives going in from all angles,” Adams said.

“As long as they maintain programs such as this that are trying to implement and establish those values, I feel blessed that I was one of four selected,” he said.

BirminghamWatch is looking at a number of the programs on President Trump’s list to end or significantly cut  and asking “What If?” Stories behind the programs targeted for elimination show why they’re valued or disdained, troubled or effective, applicable or outdated, but perhaps most of all entangled in the lives of Alabama people, their governments, and community businesses and other institutions. This is the second story in the series.