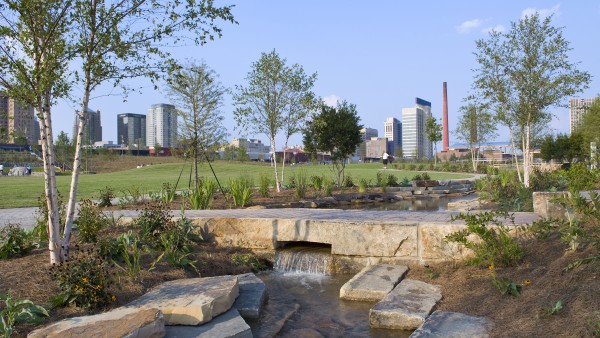 Stormwater runoff is what washes off of parking lots, roadways and rooftops when it rains. Eve Brantley, associate professor of crop, soil and environmental sciences at Auburn University, says it may sound harmless, but it has a big impact.

“I just feel like it’s the forgotten pollution,” Brantley says.

She says part of the problem is that stormwater picks up other pollutants like trash and fertilizer. The other issue is the sheer volume of runoff that is discharged into area waterways.

“So we’re pushing so much water into the river so fast now that, you know when it rains, instead of soaking into the ground, it’s all channeled to the river,” Butler says. “So it rises really quick, falls really quick, and you get a lot more erosion like this.”

He says all along the river, large sections of the bank have collapsed, often during rainstorms. This strips away vegetation that normally acts as a buffer, leaving dirt to erode into the river and fill it with sediment.

Stormwater runoff is an issue in cities throughout the U.S. Experts say developers have paved over so much land that they have changed the balance of the watershed. Now, when it rains, it’s more likely to flood; during a drought, there is less groundwater to recharge rivers and lakes.

That has gotten the attention of local residents and city leaders. At a city council meeting earlier this year, Birmingham Mayor Randall Woodfin said developers need to be proactive.

“I like plain language. We live in a bowl. And that’s caused a lot of problems for our residents,” Woodfin says. “We gotta make sure for any new development, that it doesn’t add on to the hurt that our residents are already facing.”

USDA, Federal Interagency Stream Restoration Working Group
Compared to a natural watershed, an urbanized watershed with largely impervious surfaces can generate more than five times the amount of runoff. There is also less shallow and deep infiltration of groundwater.

According to Randy Haddock, field director of the Cahaba River Society, the idea behind low-impact development (LID) is to better control runoff.

“There are a number of techniques called these green infrastructure and low-impact development techniques that allow a builder to minimize those stormwater impacts by encouraging water to soak into the ground,” Haddock says, “as opposed to putting it in a pipe and very deliberately putting it in the storm drain right away.”

You may have seen some of these features around Birmingham. Railroad Park has a lot of them built into the landscape. Some common approaches to LID include impervious surfaces to allow filtration, rain gardens or bioswales, and preservation of original vegetation.

Civil engineer Chad Bowman helped incorporate some of these elements into the Crowne at Cahaba River apartments, which sit adjacent to the Cahaba just off of U.S. 280. From the edge of the parking lot, Bowman points out the low-impact features, such as shallow basins full of gravel surrounded by bushes and grass. He says there is a strategic underground system to control stormwater runoff.

“All the water from this area runs down and goes underneath in pipes under here and then it discharges into this, what I’d say is a constructed wetland,” Bowman says.

He points below to a vegetated area full of cat tails that catches the runoff from the apartment complex.

“So what you’re getting is filtering of all this roof water and parking lot water in this little pond.”

That means water has time to soak into the ground and get rid of contaminants like oil and fertilizer, before slowly draining into nearby streams and rivers.

Bowman says features like these will likely be more common in the future, in part because cities are making them more of a priority. There is also increased demand from property owners and residents who want the added benefits of low-impact development, like green space, walkability, and flood control.

“It is better,” he says. “They’re beginning to be certain that developers and builders know that this is something that should be addressed.”

But Haddock says it is a little late. Much of Birmingham has already been developed, and he says to retrofit an existing stormwater system is about 10 times as expensive as it is to get it right the first time.