To raise funds for trans communities, an artist has pledged to do 1,000 pansy tattoos 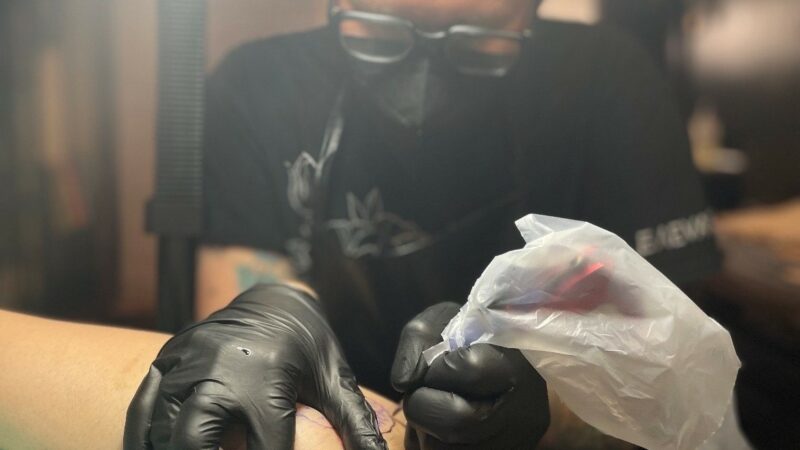 Their new project, A Thousand Pansies, aims to raise money to support the trans community by tattooing 1,000 pansies.

Csillagi, who came out as queer while in high school in Texas, was upset by legislation targeting trans and nonbinary people and their families. In September, they decided to take action by turning to their expertise: giving people botanical tattoos.

To receive the tattoo, people must apply, be selected by Csillagi, then give $500 to a designated charity. Any additional money donated helps fund tattoos for people who want one but can’t afford it.

“I landed on the flower because of its reclamation – queer reclamation of it,” Csillagi told NPR over the phone. “It is a flower that has been used originally as a derogatory term.”

The pansy has deep significance

The word “pansy” has historically been used as an insult to someone’s masculinity, but the LGBTQ community began taking back the word decades ago. The Pansy Craze in the early 20th century was a queer movement in which drag queens (referred to as “pansy performers”) became popular in underground clubs. Pansies have also been used by visual artist Paul Harfleet, who plants them where homophobic and transphobic abuse has occurred.

To get the ball rolling, they reached out to some of their notable contacts to get the tattoo and share the message. So far, authors Piper Kerman, Mia Birdsong and Kate Schatz are among the 11 people who have received the tattoo done by Csillagi in their Bay Area shop, Diving Swallow Tattoo.

Csillagi didn’t think it would be as immediately popular as it is. Their latest email sent to their mailing list included pansy tattoo openings in December.

“Within three minutes, I had like 40 emails,” said Csillagi, who is otherwise booked for tattoos until 2024.

Chef Preeti Mistry got a curry leaf branch tattoo from Csillagi in the past. When Csillagi contacted them about this project, they knew they would participate.

“Just Sunday morning we had a reminder of how important it is to fight back against this continued hate speech and legislation that leads to the type of violence we experienced recently,” Mistry told NPR in an email. “There are folks organizing against us and we have to support all of our community.”

Mia Birdsong, an activist and the author of How We Show Up, said that A Thousand Pansies asks people to think about, protect, show up for, care about, and celebrate their transgender siblings.

“We are living through a time of unprecedented violence against, and attempted erasure and dehumanization of transgender people,” Birdsong wrote in an email to NPR. “Right-wing propaganda machines are working hard to convince us that transgender people claiming their identities is somehow harmful to others.”

She added, “The money I donated to The Knights and Orchids Society is an immediate, short-term act of solidarity. But the tattoo is a permanent reminder of my commitment – a kind of contract with my own integrity.”

Eventually, Csillagi’s dream is to tattoo some well-known nonbinary and trans people who are “putting their bodies on the line to have people be aware that trans people exist,” they explained. They described Elliot Page, Jonathan Van Ness and Alok Vaid-Menon as doing groundbreaking work just by being themselves.

Csillagi has enjoyed tattooing all the project participants thus far. “I feel so energized by it and so inspired by everyone I tattoo,” Csillagi said. “People really want to help and they want to be a part of something bigger.”

The Knights and Orchids Society is the first charity to benefit from A Thousand Pansies. Based in Selma, Ala., the organization provides health and wellness services to transgender, lesbian, bisexual and gay Black people across the South.

“I just feel like they’re doing life-saving work there. And I feel really honored to be able to shout about them, and get them more assistance from the world,” Csillagi said.

As more people get the tattoo, Csillagi wants to do photo shoots to mark the project’s growth. When 20 and 50 people have pansies, they want to get everyone in the same photo to embody how the project is growing. There isn’t yet a timeline for hitting 1,000 pansies.

“I would love to hit that within the next couple of years, but I don’t know,” they said. “It’s gonna depend on how many people shout about it and can produce images with me.

Csillagi is still figuring out how to get other artists involved. They may find tattooers across the country who are willing to donate their time to tattoo pansies, or they may allow people to find their own artists.

They also want to get other types of makers involved, but they’re not sure what that will look like yet. But so far, they’re excited that people want to contribute.

“We all try to make a huge difference, but we don’t really know how much of a difference we make,” Csillagi said. “So this feels like grassroots, on-the-ground activism that’s tangible.”

The Knights and Orchids Society did not immediately respond to NPR’s request for comment.