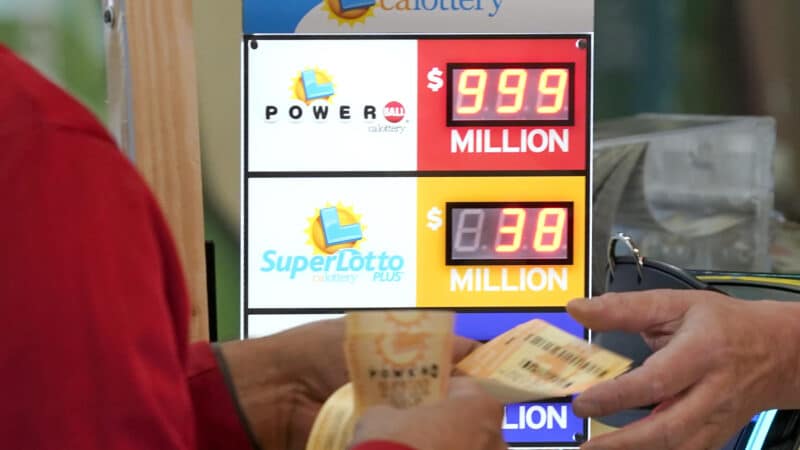 Nearly three months after a Powerball ticket sold in Pennsylvania won the $200 million cash prize, the game’s jackpot has increased to a now-estimated $1.2 billion.

The estimated total is the second-largest prize in Powerball history and the fourth-largest jackpot in U.S. lottery history, according to Powerball’s website. The U.S record was set in 2016 at $1.586 billion.

But until someone is lucky enough to match all six winning numbers and win the jackpot, lottery players across the U.S. will continue to shell out their dollars in hopes of beating the odds and winning big. (As of Wednesday, the odds of winning the jackpot were 1 in 292.2 million, according to Powerball.)

However, the drive to get rich off a winning ticket has a dark side, critics say, arguing that state-run lotteries often negatively impact low-income and minority groups.

“State lotteries are the most neglected example of systemic racism in the United States than any other issue or problem, I should say, in our country,” said Les Bernal, the National Director for Stop Predatory Gambling, an advocacy nonprofit organization, in an interview with NPR.

Bernal says that, through marketing and advertising, state-run lotteries have no regulation to their “predatory practices” that affect low-income communities — which are made up of primarily Black and brown people.

“There are people who do develop unhealthy relationships with the lottery and they develop a gambling use disorder,” said Timothy Fong, co-director of the Gambling Studies Program at the University of California, Los Angeles.

“There’s a tremendous amount of advertising and marketing that’s pro-lottery. Even on my Twitter feeds, I see this a lot…you know, very positive messaging that comes with it,” he added.

Over recent years, enormous jackpots for lottery games like Powerball and Mega Millions have become the norm, as lottery officials adjusted game rules and ticket prices this year for its players, according to The Associated Press.

The most recent change took place in August when Powerball officials added an additional drawing day in order to build larger prizes and boost sales.

But with the game implementing new changes and more drawings weekly, communities of color and low-income communities are continuing to become the subject of predatory gambling.

Research shows that, in 2021 alone, Americans spent nearly $105 billion on lottery tickets — with the average adult in the U.S. spending roughly $320 a year on tickets.

In a nationwide investigation of state lotteries by the Howard Center for Investigative Journalism at the University of Maryland, researchers found that state lottery retailers are disproportionately grouped in lower-income communities.

And in some states, studies show these retailers exist primarily in Black and Latino neighborhoods.

“What we’re talking about are gambling industry practices that are clearly designed to take advantage of vulnerable or adverse communities,” Fong said.

Fong, who studies the clinical characteristics of gambling disorders, says in order to combat the issue of predatory gambling, government regulators must first address the question of who — whether it’s retailers or the states — is responsible for stopping practices that target vulnerable communities.

“Why are you selling a potentially addictive product that we know doesn’t generate wealth and income for anybody?” Fong said. “Should there be caps on that?”

Lotteries impact both communities of color and education

When introduced to Americans, the original premise of state-run lotteries was marketed to raise funds for education — such as K-12, college or both. A few states use their lottery revenue for other things like road and park maintenance, according to the American Institute for Economic Research.

However, the Howard Center’s investigation discovered that the promise of state lotteries supporting education doesn’t quite match up.

Instead, the lotteries often create inequities by “disproportionately benefiting” college students and wealthier school districts far from the neighborhoods where lottery tickets are sold, the Howard Center reported.

“Poor people are collateral damage to a cause of raising money for what the legislators feel is good purposes … public safety, local schools,” Gregory W. Sullivan, former Massachusetts inspector general and now research director for the Pioneer Institute, told the Howard Center.

Bernal agrees. “You have low-income people, essentially paying for college scholarships for middle-class and upper-class families to go to college. It’s the American dream, completely in reverse,” he said.