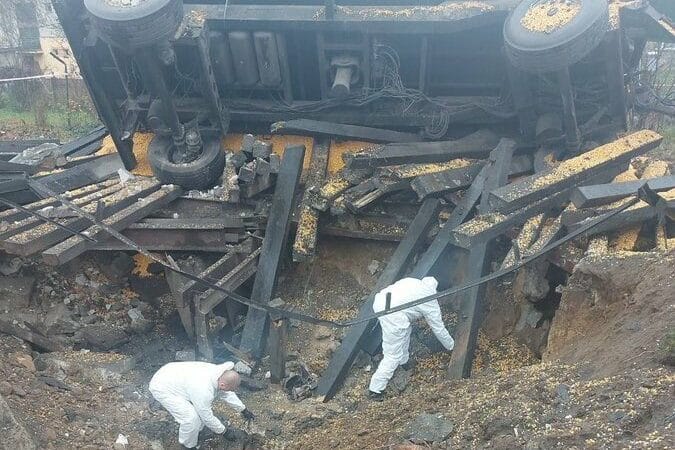 Follow live updates on the war in Ukraine here.

KYIV, Ukraine — Poland’s president said Wednesday it appears a missile that landed just inside the country’s border was from Ukraine in what he called an “unfortunate accident.”

“We have no evidence at the moment that it was a rocket launched by Russian forces,” President Andrzej Duda said. “However, there are many indications that it was a missile that was used by Ukraine’s anti-missile defense.”

The United States, NATO and others expressed support for Poland’s position, though the investigation was still ongoing.

However, Ukraine’s President Volodymyr Zelenskyy said he did not think a Ukrainian missile struck Poland.

“I have no doubt that it was not our missile or our missile strike,” Zelenskyy said during a meeting that was broadcast on Ukrainian television. He said Ukraine would participate in the investigation. “I want us to be fair, and if it was the use of our air defense, then I want that evidence,” he added.

Two Polish citizens were killed Tuesday when the missile came crashing down in a rural village in eastern Poland, just a few miles from the western border of Ukraine. This happened amid a Russian barrage of missiles fired at cities across Ukraine, and Ukraine responding with its air defense systems.

NATO members discussed the issue in Brussels, and the alliance’s secretary-general, Jens Stoltenberg, said a preliminary analysis pointed to a Ukrainian air defense missile that had been fired at an incoming Russian missile.

“Let me be clear: This is not Ukraine’s fault. Russia bears ultimate responsibility as it continues its illegal war against Ukraine,” Stoltenberg said.

In Russia, Defense Ministry spokesman Igor Konashenkov said Russian specialists had studied images of the explosion in Poland and concluded rocket fragments were from an S-300 surface-to-air missile system fired by Ukraine.

Konashenkov insisted Russia carried out a wave of what he called “precision” strikes on Ukrainian military and energy infrastructure. He said this included attacks in western Ukraine, but all were 20 miles or more away from Poland’s border.

The Biden administration said it supported the investigation that Poland was carrying out.

“We have seen nothing that contradicts President Duda’s preliminary assessment that this explosion was most likely the result of a Ukrainian air defense missile,” Adrienne Watson, a spokesperson for the National Security Council, said in a statement.

“The party ultimately responsible for this tragic incident is Russia, which launched a barrage of missiles on Ukraine specifically intended to target civilian infrastructure,” she added.

Russia fired about 100 missiles at Ukraine

Russia fired a barrage of about 100 missiles into Ukraine in just a couple of hours Tuesday afternoon. It was targeting Ukraine’s electricity grid, as it has been doing for the past month.

Ukraine says it shot down more than 70 of the incoming missiles, a rate in line with other recent attacks.

But Ukraine’s energy systems, which already include daily power outages in many parts of the country, suffered another blow.

In the capital Kyiv, the largest city with around 3 million residents, about half the homes and businesses were without power as of midday Wednesday, according to Mayor Vitali Klitschko.

The western city of Lviv and the northeastern city of Kharkiv also lost most of their power during Tuesday’s attacks. However, much of the electricity was restored on Wednesday, according to officials in those cities.

One woman was killed in Kyiv when a missile slammed into her apartment in a residential area near the center of the city. There were no obvious military, government or energy facilities in the area.

Standing in the darkness outside the apartment building, Vladimir Yanachuk said he expected many more Russian attacks, but this was not weakening the resolve of Ukrainians.

As he was speaking in the street, the lights suddenly came back on in surrounding apartment buildings, though not the one that had been hit.

Ukrainians have been rapidly repairing the power outages inflicted by the Russians, but the sheer number of attacks has strained the country’s capacity to keep up.

Russia has damaged around 40% of the country’s electricity system, according to Ukrainian officials.