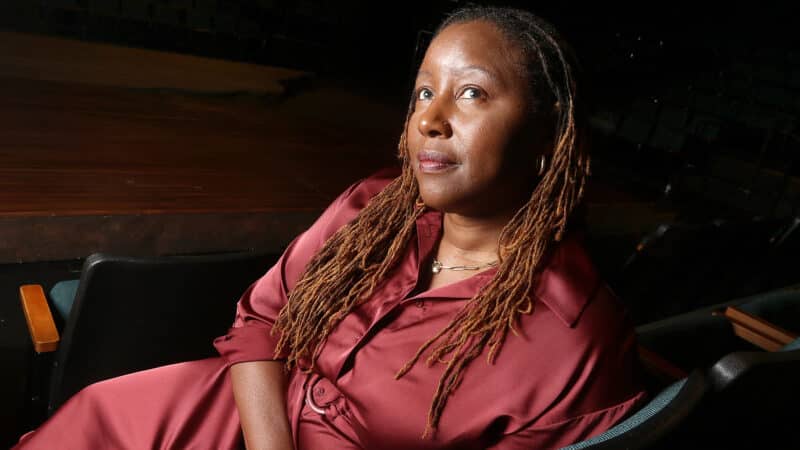 When Nataki Garrett began to receive death threats early this year, she said her impulse was to retreat.

“When this first happened, I actually tried to isolate myself,” said the Oregon Shakespeare Festival (OSF) artistic director in an interview with NPR. “The act of threatening is supposed to make you feel isolated. And it does.”

But isolation isn’t an option when you run one of the country’s oldest and biggest non-profit theater companies.

So, a few months ago, OSF hired a private security detail to ensure Garrett’s safety when out in public in Ashland, Ore. That’s where OSF, which was founded in 1935, is based, and it’s been Garrett’s home since she took the high-profile job in 2019. “I can’t go for a walk unless I let my security detail know and I plan a route,” Garrett said. “It has completely upended my life.”

The company said for security reasons it cannot divulge specifics about the death threats. But what was happening to Garrett was an open secret in Ashland for months – an escalation of the professional critiques and personal attacks the artistic director said she regularly faced since joining OSF. “In my first three months, I was called a “Black bitch” and followed home,” Garrett said. “I had to have my housing relocated.”

It was the artistic director’s decision to share her story with NPR that set off a wave of responses and actions at both local and national levels.

Ashland Mayor Julie Akins said she learned about the threats to Garrett during one of her regular meetings with OSF executive director David Schmitz a few weeks before the NPR story came out on Sept. 28. (Schmitz said he believes he first discussed the matter with the mayor at their Aug. 26 meeting.) At first, Akins said she did nothing with the news.

“I just didn’t want to think that something like that could happen, that someone would make a death threat against a bold, brilliant woman who brings so much value to our community,” Akins said. “I was a little slow to react.”

Spurred by the media attention after NPR’s story and after talking with OSF, she read out a statement in a city council meeting on Oct. 4 condemning the attacks and vowing to work towards making Ashland, a city of roughly 21,000 residents, around which 90% are white, a safer and more equitable place.

She said she’s redoubling her efforts to diversify the city’s administration, which is almost entirely white, and is in the process of hiring a Diversity, Equity and Inclusion manager. “It’s not enough to say we don’t support racism,” Akins said. “You have to actually actively fight racism to get the work done.”

Akins also engaged the local police force. Police chief Tighe O’Meara said he had no knowledge of the threats until he learned about them through NPR’s coverage. He said representatives from the police department and the theater company are now planning to hold regular meetings with a view to improving the safety of both company members and the public.

“The Ashland Police Department takes very seriously any threats against community members, and especially if there’s a bias crime involved,” O’Meara said. “We want to have a closer partnership going forward.”

The relationship between Ashland police and OSF has been fraught at times, especially when it comes to race relations. Last year, The American Civil Liberties Union (ACLU) of Oregon launched a $2 million lawsuit against the City of Ashland in response to the arrest without probable cause of actor Juan (Tony) Sancho. According to a report by the Oregonian, the Latino actor “ended up handcuffed to the floor of a cell in the county jail” after being apprehended while walking home after an evening of drinking in a downtown bar in 2019.

This incident shook Garrett. She cited it as one reason she didn’t contact the police after the death threats against her started. “I didn’t feel confident engaging with law enforcement,” she said. “And I can’t say that I do now.”

Outpouring from supporters across the U.S.

If anything has given the artistic director confidence, it’s the massive outpouring of support she’s received from cultural organizations across the country after NPR’s story went live. “What I am the most thankful for is the reminder that I’m not doing this work by myself,” Garrett said.

News outlets including Playbill, Broadway World, the Oregonian and the Hollywood Reporter picked up the story. PEN America released a statement denouncing the threats, as did, in a joint statement, The Dramatists Guild, Theater Communications Group and the Shakespeare Theatre Association.

“We urge the industry to treat writers fairly, and to dismantle gatekeeping systems that stifle the expansion of the theatrical canon, impacting whose stories get told, how they get told, and by whom,” said the joint statement in part. “Everyone of good conscience must stand together to reject hate and to embrace empathy; it is the only path towards systemic change.”

Garrett, though the most prominent, isn’t the first person in OSF’s long history to suffer such attacks in a state founded on exclusion laws that kept Black people out for decades. In 2016, for example, actress Christiana Clark posted a video on Facebook after a passing cyclist reportedly said to her: “It’s still an Oregon law. I could kill a Black person and be out of jail in a day and a half. Look it up. The KKK is alive and well here.”

Yet Garrett might be the only theater director in the country at this point with a private security detail. “There just haven’t been a lot of Black women in positions of leadership at larger, predominantly-white organizations that have the kind of resources that OSF does,” said Theatre Communications Group spokesperson Corinna Schulenberg.

Hana Sharif, one of the very few other Black women artistic directors of major theater companies in the U.S. and a friend of Garrett’s, said she too has experienced her fair share of verbal abuse since coming on board to lead the Repertory Theatre of St. Louis a few years ago. But Sharif said she cannot imagine receiving threats to her physical safety in St. Louis, a much more racially-diverse city, where around half of the population is Black. “For me, it’s not the same as Nataki,” Sharif said. “No one’s outside of my house. No one’s stalking me as I take my kid to school.”

Sharif is proud of Garrett for keeping on with her work – and for speaking up about the threats to her safety.

For her part, Garrett hopes the media attention from NPR and snowballing response from the wider community will lead to positive change.

“I am a part of a continuum, a practice that will create thriving, safe spaces for theater artists for generations to come,” she said. “That is my goal and I need people to follow me down this path.”