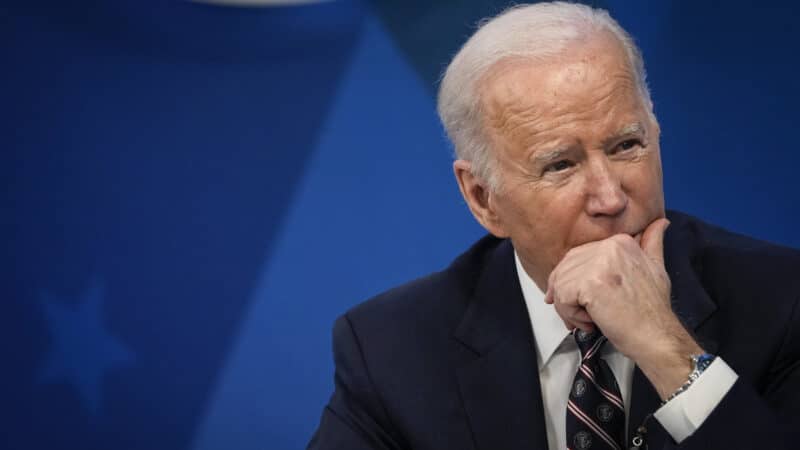 With just over a month to go in the 2022 midterm elections, Democrats are starting to rally around President Biden, according to the latest NPR/Marist poll.

Biden’s approval rating is up to 44%, which marks a third straight month of improvement. He had bottomed out in July at about 36%. Democrats are also largely keeping pace with Republicans on enthusiasm about the elections this fall, a continued trend after the Supreme Court’s June Dobbs decision, which overturned the guaranteed right to an abortion in this country.

Those are good signs for Democrats, but there are warnings, too — 7 in 10 respondents said they think the country is headed in the wrong direction, and inflation continues to rank as the top issue voters say they will be thinking about when they cast a ballot.

And when it comes to enthusiasm, while white, college-educated voters — who have trended toward Democrats in the past decade — are among the most engaged group of voters, the poll found young and Black voters are among the least likely to vote this fall.

What’s more, Democrats are below where they historically have needed to be on the question of who people say they would vote for if the elections were being held today, the so-called congressional ballot test. And the survey also comes at a time when Republicans — on the back of a flood of multimillion-dollar ad campaigns — have started to see improvements in some critical Senate races that will determine control of that chamber.

Whatever the results, the groundwork is already being laid for outcomes to be contested. The Trump factor in these elections has been clear with candidates mimicking the former president’s bombastic style and spreading his lie about the 2020 presidential election being stolen. That is, of course, false. Biden won, and that’s been proven repeatedly in and out of court.

But the survey found that only half (49%) of respondents think the candidate they supported should definitely concede if their opponent is declared the winner — and only a third of Republican voters think they so.

A president’s approval rating has traditionally been one of the key indicators of how a president’s party will do in congressional elections. And Democratic strategists had been worried that Democratic candidates could only overperform their president’s numbers by so much.

The increase is happening because Biden is seeing double-digit improvement with Democrats and independents. In July, just 75% of Democrats said they approved of the job the president was doing, well below where a president’s party traditionally is. But now that number is up to 87%.

In July, 28% of independents approved. But since then, there’s been something of a thaw — 39% approve, fewer are disapproving and more independents have moved into the undecided category.

Biden has seen some wins over the last few months, including the signing of the Inflation Reduction Act. And while prices are still higher than last year on average, gas prices are down.

Biden had also been suffering from an intensity problem. In July, just 11% said they strongly approved of the job he was doing. That’s double in this poll — 24%.

That’s the highest “strongly approve” score for Biden since July 2021, a month before the Afghanistan withdrawal when Biden saw his ratings decline.

More than 8 in 10 registered voters who responded to the survey said they are “definitely voting” this fall — 82% of Democrats said so, as did 88% of Republicans and 80% of independents.

The groups most likely to say so were college-educated white women and men, men who live in small cities or the suburbs and Baby Boomers (those 58 and older).

The least likely were Black voters, Gen Zers and Millennials (those 41 and younger) and those who live in rural areas.

Again, Republicans edge out Democrats slightly in their interest level. The groups mostly likely to say they were very interested were white college graduates, especially men and older voters.

The least likely to say so were younger voters, people making less than $50,000 a year; Black voters; parents with children under 18; those who haven’t graduated college, especially white women without degrees; and those who live in small towns.

When voters were asked who they would vote for in their congressional district, a Democrat or Republican, if the election were held today, the parties are in a statistical tie. Democrats have a narrow 46%-to-44% edge in the survey.

That’s within the margin of error of +/- 4.2 percentage points, meaning results could be about 4 points higher or lower.

That’s because competitive races are taking place in areas that are more conservative than the country as a whole, how districts are drawn and how densely concentrated Democrats are in cities.

Republicans need a net gain of five seats in these midterm elections to win control of the House.

Taking a look at the data, when Democrats made big gains in the House in recent midterms (2006 and 2018) they had advantages of at least 7 points on the measure. When Republicans made gains (2010 and 2014), they didn’t need leads that were quite so large.

In 2014, for example, when Republicans picked up 13 seats, they only had a 2-point edge on the question, in an average of the polls. In 2010, when they gained a massive 63 seats, they had a 9-point advantage.

From a choice of five issues — inflation, preserving democracy, abortion, immigration and health care — inflation once again came out on top as most top of mind when people think about voting in this election.

(Last month’s NPR/PBS NewsHour/Marist poll had a deeper look at which issues were important to voters. Republicans are using crime more in their ads in key states like Wisconsin. Last month, it ranked sixth overall, though it was creeping up with Republicans in particular.)

For independents, it was inflation (38%), followed by preserving democracy (33%) and then immigration (12%).

How people will vote is also very different. The pandemic reshaped voting procedures with record numbers filing votes by mail. A plurality of Democrats say they will vote by mail this November, but the overwhelming majority of Republicans say they’ll still cast theirs in person. A slim majority of independents also said they intend to vote in person.

Confidence in elections wanes among not just Republicans

Three-quarters of respondents said they have confidence in their state or local governments to run a fair and accurate election this November, the highest level since Biden’s took office.

But there was a significant gap on this between Democrats and Republicans — 92% of Democrats said they had confidence, while 69% of Republicans said they did. (Three-quarters of independents also said so.)

However, there were also racial and generational divides that cut across political and economic lines. In addition to Trump supporters, those without college degrees and those living in small towns and rural areas, also among the least likely to say they had confidence in the results of this fall’s elections were Black, Latino and younger voters, groups that have leaned toward Democrats, as well as those making less than $50,000 a year.

The most likely to have confidence: Biden supporters and white college grads, especially women with degrees.

Despite their lagging confidence in elections, Republicans were, however, the most likely to say they always display an American flag on their property — almost 6 in 10 said so as compared to 22% of Democrats and 27% of independents. A majority of Democrats (54%) said they never do.

Trump, like other right-wing populists around the globe, was able to use white grievance and nationalism as the fuel to his political power, something that will be a central piece of a 2024 Trump candidacy, if he decides to run.

President Biden’s approval ratings have risen to 44%, according to a new NPR/Marist poll out today.

Democrats could hear that as good news. However, voters also say inflation is the most important issue ahead of next month’s midterms.

FADEL: So what are some of the big takeaways here?

MONTANARO: Well, you noted Biden’s improvement there. I mean, back in July, he’d bottomed out at 36%. And that’s been steadily on the rise since then. Gas prices have been declining. Democrats have gotten some legislative wins. And the president’s really been out there more, touting some of those things. And the improvement, you know, is coming from base Democrats mostly and also independents. Both groups had really not been very excited about his presidency to that point.

Now, being in the low to mid 40s for approval rating is not exactly great for an incumbent party. And remember, the president’s party usually loses a significant number of seats in a president’s first midterm, historically, as it is. But this will stop at least some of the nail-biting I’ve been hearing from Democratic strategists about just how much their candidates need to overperform the president, which is a pretty hard thing to do.

FADEL: Now, we’re just weeks away from the midterms, where turnout has traditionally been low. Is that likely to be the case this time around?

MONTANARO: Well, lower than a presidential election, for sure, but signs are pointing to high turnout, actually, for a midterm. For example, there seems to be very high enthusiasm from both Republicans and Democrats. More than 8 in 10 registered voters who responded in this survey say they definitely intend to vote – might not be that high, but that’s pretty high to be saying that they will. Republicans slightly higher than Democrats, but that’s to be expected, but not really by a lot. And the groups, though, that are the least enthusiastic about voting this fall are Black voters and young voters, who, of course, are pillars of the Democratic base. So a warning sign there for Democrats.

Some of this, though, cuts across party lines when you look at enthusiasm and is more about socioeconomics. The people who say they’re most interested in these elections are college-educated whites and baby boomers, older voters. Among the least interested, in addition to young voters and Black voters, are people making less than $50,000 a year, parents of children under 18, those who live in small towns and those without college degrees. There’s a pretty substantial gap here, by the way, between women without college degrees and men without them. Women without degrees say they have much less interest in this election. Meanwhile, the converse is true for women with degrees, who are among the most likely to vote.

FADEL: Now, during this cycle, Democrats have really focused on the Supreme Court’s abortion decision, while Republicans have hammered them on inflation and crime. How are these issues resonating with voters?

MONTANARO: Well, abortion is certainly up there for Democrats in particular. It’s certainly a big motivating issue for them. It’s second, Democrats say, behind preserving democracy for them. But as you noted, inflation remains a top issue, and that’s true of independents, who are so key in swing districts, and of course, for Republicans. But even Gen Zers and millennials, who are also among the most likely to approve of the job Biden’s doing and want a Democrat elected to Congress, also say that inflation’s their top issue, too.

Lots of swing-district Democrats have been arguing that the party can’t put all of its eggs in a one-issue basket but also need to make the case on the economy as well. You know, it’s a lot easier to motivate people with anger and fear, and the ones angry about inflation right now, frankly, are Republicans. And undoubtedly, Democrats and many independents are angry about abortion rights no longer being guaranteed. So these are likely still to remain much of the focus in this election and where we’re seeing millions of dollars being spent.

FADEL: NPR’s Domenico Montanaro. Thanks so much.