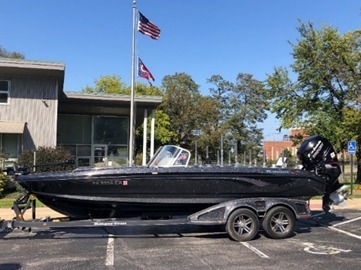 Hoping to win a pro fishing tournament with nearly $30,000 on the line, Jake Runyan and Chase Cominsky illegally stacked the deck in their favor, according to officials in Ohio — and now the pair have been indicted on three felony charges each.

A grand jury has indicted Runyan and Cominsky on charges of cheating, attempted grand theft and possessing criminal tools, according to the Cuyahoga County prosecutor’s office. The charges are fifth-degree felonies, meaning they could each bring a punishment of up to 12 months in prison and $2,500 in fines.

“I take all crime very seriously, and I believe what these two individuals attempted to do was not only dishonorable but also criminal,” Prosecutor Michael C. O’Malley said in a statement.

The anglers also face a misdemeanor count of unlawful ownership of wild animals — a charge related to raw fish filets they allegedly had on their boat. If they’re convicted of that crime, their fishing licenses could be suspended indefinitely.

This case of apparent piscine perfidy erupted two weeks ago, when an inspection of Runyan and Cominsky’s catch at the Lake Erie Walleye Trail tournament in Cleveland found their fish had been stuffed with lead weights and fish fillets. They stood to win the competition and team of the year honors, along with a total prize of $28,760.

The bogus catch briefly landed the pair in first place at the tournament. But the event’s organizer suspected a disconnect between the normal-sized fish and their outsized weight. And in a dramatic scene that played out in front of Runyan and Cominsky’s profanely outraged rivals, the walleyes were cut open to reveal evidence of cheating.

“We got weights in fish!” declared Jason Fischer, director of the Lake Erie Walleye Trail fishing tournament, in a widely watched video from the scene.

After the indictment was handed down this week, authorities seized Cominsky’s fishing boat and trailer as a tool of crime, saying the team used the craft in the tournament.

Runyan, who’s from Cleveland, and Cominsky, who’s from Hermitage, Pa., were coming off a 2021 season in which Runyan once said their winnings totaled more than $300,000. But the pair also saw some of their prizes stripped away by a high-profile disqualification after one of them failed a tournament’s polygraph test.