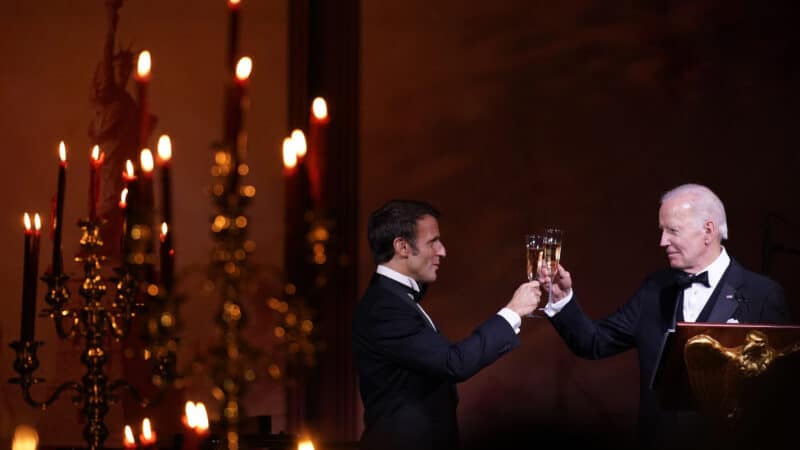 Orchestrated in part by the first lady, President Biden hosted French President Emmanuel Macron and several hundred other guests at the White House Thursday evening for his first state dinner as commander in chief.

State dinners honoring foreign leaders are a White House tradition dating back to the 1800s, the first of which welcomed King Kalakaua of Hawaii, hosted by President Ulysses S. Grant on Dec. 22, 1874. The occasion is a show of hospitality to some of the most powerful people and a sign of friendship, attended by U.S. and foreign officials, as well as actors, musicians and other stars.

More than 300 additional guests made their way to the White House for Biden’s party. Among them were members of the French and American elite, including business magnates, movie stars, TV personalities, musical artists, dozens of state and federal officials, military leaders and even a Medal of Honor recipient.

House Republican leader Kevin McCarthy and his wife joined Biden and the Democrats for dinner.

“We’re thrilled to have him perform at the White House for the first state dinner of the Biden-Harris administration,” said Vanessa Valdivia, spokesperson for first lady Jill Biden.

Dinner with a red, white and blue theme

The first lady said her red, white and blue design for Thursday’s dinner was inspired by shared colors and values between France and the U.S.: liberty, democracy, equality and fellowship.

Tables set on the South Lawn of the White House displayed red roses, blue delphiniums and white irises, “…Which are the symbols of our nation’s capital and of France — their intricate petals reflecting the interwoven history of our nations,” the first lady said in a statement Wednesday.

As for the meal itself, the White House spared no expense. Lobsters were brought in from Maine and there was beef with shallot marmalade, prepared by White House Executive Chef Cris Comerford.

What the world leaders wore

Both presidents Biden and Macron sported classic black tuxedos for the evening, while their wives seized the opportunity to sport something more in tune with the event’s color scheme. According to Vogue, Jill Biden wore a navy gown by Oscar de la Renta hanging off her shoulder neckline. It had long sleeves and a botanical lace pattern.

As for Brigitte Macron, she donned a white turtleneck dress with silver detailing at the waist and neckline.