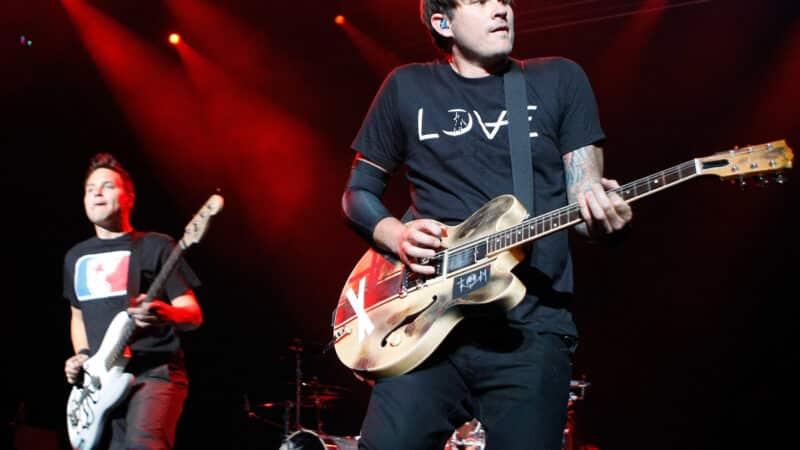 Blink-182, San Diego’s kings of pop-punk, are getting the band back together.

Tom DeLonge is rejoining bandmates Mark Hoppus and Travis Barker for the first time in seven years. The band announced via their web site and social media that they would be embarking on a world tour starting in March 2023 are are releasing a new song, “Edging,” on Friday, with a new album to follow.

DeLonge has quit the band twice and now returned twice. For the last seven years, Matt Skiba of the band Alkaline Trio has taken his place.

The band formed in 1992, playing all over San Diego in YMCAs, basements and VFW halls before releasing their first record Cheshire Cat in 1995 and catching the eye of major record labels. In 1997, their album Dude Ranch saw Blink-182 receive major radio play for the song “Dammit.”

The original lineup featured Scott Raynor on drums, Mark Hoppus on bass and Tom DeLonge on guitar, before Scott Raynor was fired in 1998 and replaced with Travis Barker. This cemented the lineup for the band that would then record 1999’s Enema of the State, which became a gigantic commercial success, selling over 15 million records.

The band was known for their sense of humor and music videos that aired regularly on MTV. In 2001 they released Take Off Your Pants and Jacket, which went on to be their second highest-selling record. In 2003 they released a self-titled album featuring a more mature sound.

Tensions within the band led to DeLonge leaving in 2005 and forming the group Angels and Airwaves, while Hoppus and Barker formed their own group +44.

In 2008, the band would reunite again after Barker was nearly killed in a plane crash that took the life of four people and critically injured Adam Goldstein, known as “DJ AM.”

After Barker healed from injuries, Blink-182 toured again and released the 2011 record Neighborhoods. The band stayed together for seven more years before DeLonge parted the band again, citing creative differences.

In the intervening years, DeLonge became involved in funding investigations of UFOs.

With Skiba on guitar, the band released the albums California in 2016 and Nine in 2019.

In June 2021, Mark Hoppus confirmed that he had received a cancer diagnosis and had been undergoing treatment.

At the end of the year, Hoppus declared he was cancer-free. In an interview with People, Hoppus said the trio had spent some time together before his chemotherapy began, and they were in “a really great place right now.” The bassist added: “I keep writing music, and I’m open to whatever the next phase of Blink is … I’m hopeful for the future. I’m just damn glad to be here.”