An LAPD officer who was killed in a training exercise was targeted, a lawyer alleges 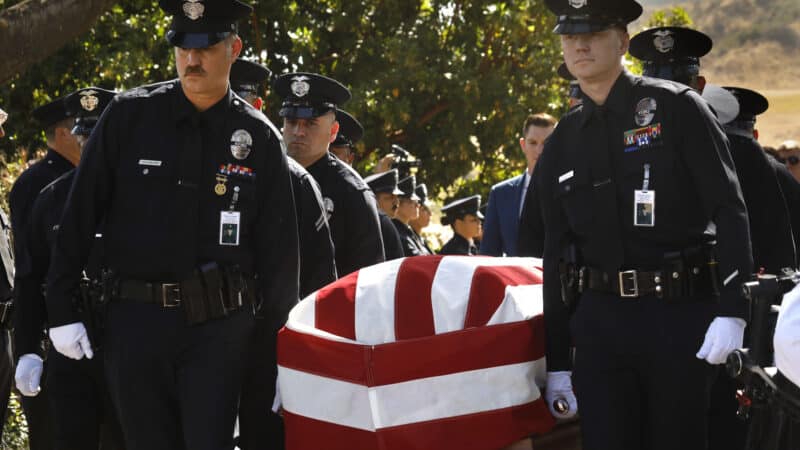 The Los Angeles Police Department officer who was killed during a training exercise, in what officials called a “tragic accident,” was allegedly targeted for investigating a gang rape by fellow officers, according to his family.

LAPD officer Houston Tipping’s mother has filed a wrongful death claim against the city. Lawyer Bradley Gage told NPR that the 32-year-old was deliberately assaulted after submitting reports concerning a female victim who claims she was raped by four LAPD officers, including one who was part of the training during which Tipping was killed.

“They used that training as a cover to kill him in retaliation for his whistleblowing activity,” Gage said.

Gage said Tipping became aware of the alleged assault when a female victim told him about the attack, identifying the accused rapists by the names on their name tags. Tipping immediately began looking into the woman’s reports, moving it “on up the chain, ” Gage said.

Without a video recording of the incident, accounts of what happened vary

Tipping, a five-year veteran and bike instructor with the department, suffered a spinal injury during a practice drill covering self-defense tactics at a May 26 LAPD training academy. Tipping was role-playing the part of an uncooperative “suspect” and charged an unnamed officer in the scenario. The two tussled for a short time before the unnamed officer allegedly dropped Tipping on his head, causing a catastrophic injury to his spine, according to the department. The incident caused Tipping to go into cardiac arrest, and he died three days later, having never regained consciousness.

An investigation states that 18 officers and one sergeant witnessed the deadly tussle. LAPD officials have repeatedly stated that there was no video or audio recording of the training.

The department did not respond to NPR’s request for comment regarding Gage’s claims about the incident or the alleged sexual assault.

Gage disputes the official account, arguing that Tipping was beaten by several officers who “repeatedly struck [him] in the head and body severely enough that he bled, required stitches, suffered a lacerated liver and three broken ribs.” He said UCLA medical experts who have reviewed Tipping’s autopsy report concluded that the officer’s injuries do not square with the department’s version of events.

“If it happened the way they say it happened, how did he end up with six staples in his head and a lacerated liver?” Gage asked.

The LAPD has said many of Tipping’s injuries were the result of attempts to revive him at the academy. Again, Gage claims that is untrue. He said medical records obtained by his legal team show that a LUCAS device, which works as an automatic CPR machine and that was in the training room at the time, was not turned on.

“Had they used the device, it could explain the broken ribs, but we know it was never used,” Gage said.

He added: “The LAPD also tried to claim that the broken ribs could be a cause of the perforated liver. But as I understand it, the ribs were on the opposite side of the liver.”

And regardless of the differing accounts given by the officers who were present, Gage said LAPD training guidelines state that a person is not supposed to be lifted off the ground.

“When you look at all these horrific injuries, the truth is something went seriously wrong here,” he said. “This raises a number of questions that the family would like to have answered.”

LAPD offers an account of the incident to the public

On Tuesday the LAPD presented a report on Tipping’s death to the Los Angeles Police Commission. It is the first detailed public accounting the LAPD has offered of the fatal incident.

“This was not a mob attack, as has been alleged, rather (a one-on-one scenario in) which was Officer Tipping playing the role as a suspect in order to help officers learn how to deal with that one individual,” Lizabeth Rhodes, director of the Office of Constitutional Policing and Policy, told the city Police Commission.

The same scenario had been run about 10 times before Tipping took a turn, she explained.

Rhodes told the commission that Tipping was instructed to aggressively attack a trainee officer, pretending to be a suspect. According to witness reports, the trainee struck Tipping in a leg with a foam baton and he reacted “as he was supposed to in this scenario, by going down on one knee to simulate a successful baton strike.”

Tipping did not stay down, according to Rhodes.

She said it was immediately clear that Tipping, who was “struggling to speak,” was injured, prompting the officers in the training session to begin first-aid efforts.

“The coroner’s office determined that this was an accident, as did the department,” Rhodes said. “It was a tragic accident and again we express our condolences.”

The department has made recommendations to improve the bicycle patrol school, including training safety. But Rhodes said the recommendations would most likely not have prevented Tipping’s death.

Gage is calling on the Los Angeles District Attorney’s office to launch an independent investigation into the matter.