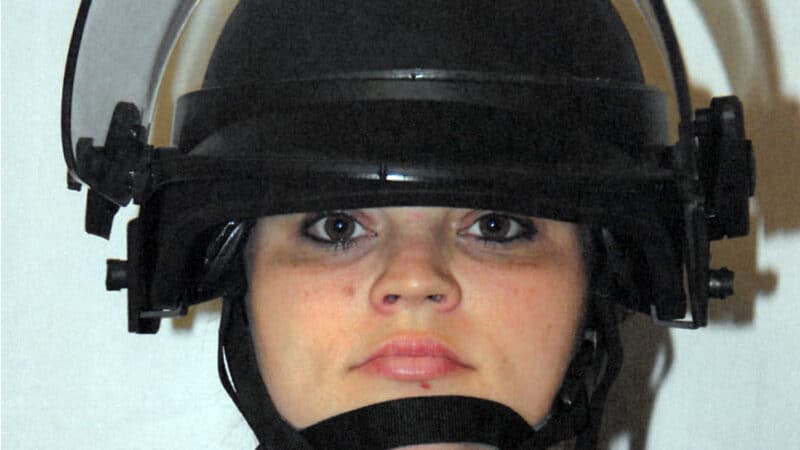 LOUISVILLE, Ky. — A former Louisville police officer blamed for instigating a conflict that led to the fatal shooting of a Black barbecue restaurant owner during the Breonna Taylor protests has pleaded guilty to using excessive force.

Katie R. Crews, 29, pleaded guilty in federal court Tuesday to a misdemeanor. She was indicted in March on a felony excessive force charge that carried a maximum penalty of 10 years in prison.

Crews, who is white, was fired by Louisville police earlier this year for escalating a conflict the night of restaurant owner David McAtee’s death and for a separate incident where she taunted protesters on social media.

McAtee’s death furthered the anger of protesters who had began massing in Louisville’s downtown streets in 2020 over the death of Taylor, a Black EMT killed by police who knocked down her door while executing a drug search warrant.

Under the terms of the agreement, Crews, of Jeffersonville, Indiana, can no longer work in law enforcement. She will be sentenced in federal court in January. The misdemeanor charge carries a maximum penalty of one year in prison.

Steve Romines, a lawyer for McAtee’s family, said they are “glad that there has been an acknowledgment of the gross misconduct of (Louisville police) the night of David’s death.”

Crews wasn’t “a lone wolf who decided to go rogue,” Romines said in an email Wednesday, arguing that authorities were sent to Louisville’s west end by commanding officers to “violate policies and harass people.”

A civil lawsuit brought by McAtee’s family blames Crews and other law enforcement for using aggressive tactics on bystanders who were on private property the night of McAtee’s death.

A couple days earlier, Crews had been photographed by media in downtown Louisville with a protester who offered her a flower. Crews posted the photo on social media and wrote that she hoped “the pepper balls that (the protester) got lit up with a little later on hurt.”

“Come back and get ya some more ole girl, I’ll be on the line again tonight,” Crews wrote.

She later told police investigators she was irritated at the photo’s publication, because she saw it as the “media spinning things.”

On the night of McAtee’s death, Crews was part of a group of Louisville officers and National Guard members sent to an area near his eatery, YaYa’s BBQ, to break up a crowd.

The officers were sent to a predominantly Black neighborhood “for a show of force (and) intimidation,” far away from the downtown protests, according to the McAtee family’s lawsuit, which is pending. It said Crews and other officers were “spoiling for a fight.”

Crews approached YaYa’s and began firing nonlethal pepper balls, which release a chemical agent. The shots from Crews prompted bystanders to rush into McAtee’s kitchen, and Crews kept firing in that direction. McAtee’s niece, standing in the doorway of the kitchen, was hit by one of Crews’ nonlethal rounds.

“Tragically, Crews’ aggression and desire to inflict harm on others was taken out on David McAtee and his niece,” the lawsuit said. Romines has said people were running into McAtee’s kitchen yelling that they were being shot at, and McAtee had no idea who was doing the shooting.

Prosecutors later cleared Louisville officers and two National Guard members in a criminal probe into McAtee’s death, saying they were justified in using deadly force because McAtee fired at them.

Crews later told investigators that no one in the crowd that night had been disorderly. She also said she had limited training with the pepper ball guns.

“I didn’t check myself and I own it,” she told police investigators. “I own that I messed up.”