A huge fire broke out at Iran’s Evin prison, where political prisoners are held 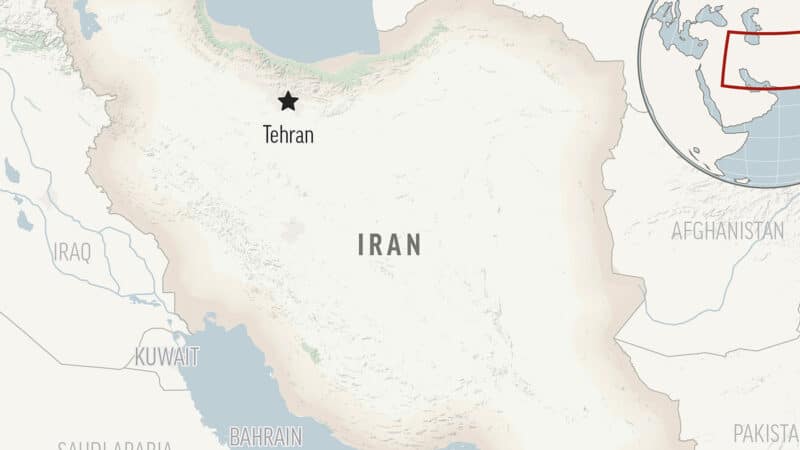 BAGHDAD — A huge fire blazed Saturday at a notorious prison where political prisoners and anti-government activists are kept in the Iranian capital. Online videos and local media reported gunshots, as nationwide protests entered a fifth week.

Iran’s state-run IRNA reported there were clashes between prisoners in one ward and prison personnel, citing a senior security official. The official said prisoners set fire to a warehouse full of prison uniforms, which caused the blaze. He said the “rioters” were separated from the other prisoners to de-escalate the conflict.

The official said that the “situation is completely under control” and that firefighters were extinguishing the flames. Later, Tehran prosecutor Ali Salehi said that “peace” had returned to the prison and that the unrest was not related to the protests which have swept the country for four weeks.

Footage of the blaze circulated online. Videos showed shots ringing out as plumes of smoke rose into the sky amid the sound of an alarm. A protest broke out on the street soon after, with many chanting “Death to the Dictator!” — a reference to Supreme Leader Ayatollah Ali Khamenei — and burning tires, circulating videos showed.

Witnesses said that police blocked roads and highways to Evin prison and that at least three strong explosions were heard coming from the area. Traffic was heavy along major motorways near the prison, which is in the north of the capital, and many people honked to show their solidarity with protests.

Riot police were seen riding on motorbikes toward the facility, as were ambulances and fire strucks. Witnesses reported that the internet was blocked in the area.

The U.S.-based Center for Human Rights in Iran reported that an “armed conflict” broke out within the prison walls. It said shots were first heard in Ward 7 of the prison. This account could not immediately be verified.

Anti-government protests have continued for weeks

The prison fire occurred as protesters intensified anti-government demonstrations along main streets and at universities in some cities across Iran on Saturday. Human rights monitors reported hundreds dead, including children, as the movement concluded its fourth week.

Demonstrators also chanted “Down with the Dictator” on the streets of Ardabil in the country’s northwest. Outside of universities in Kermanshah, Rasht and Tehran, students rallied, according to videos on social media. In the city of Sanandaj, a hotspot for demonstrations in the northern Kurdish region, school girls chanted, “Woman, life, freedom,” down a central street.

The protests erupted after public outrage over the death of 22-year-old Mahsa Amini in police custody. She was arrested by Iran’s morality police in Tehran for violating the Islamic Republic’s strict dress code. Iran’s government insists Amini was not mistreated in police custody, but her family says her body showed bruises and other signs of beating after she was detained.

At least 233 protesters have been killed since demonstrations swept Iran on Sept. 17, according to U.S.-based rights monitor HRANA. The group said 32 among the dead were below the age of 18. Earlier, Oslo-based Iran Human Rights estimated 201 people have been killed.

Iranian authorities have dismissed the unrest as a purported Western plot, without providing evidence.

Public anger in Iran has coalesced around Amini’s death, prompting girls and women to remove their mandatory headscarves on the street in a show of solidarity. Other segments of society, including oil workers, have also joined the movement, which has spread to at least 19 cities, becoming one of the greatest challenges to Iran’s theocracy since the country’s 2009 Green Movement.

Riots have also broken out in prisons, with clashes reported between inmates and guards in Lakan prison in the northern province of Gilan recently.

The prison is known for holding political prisoners

Evin Prison, which holds detainees facing security-related charges and include dual citizens, has been charged by rights groups with abusing inmates. The facility has long been known for holding political prisoners as well as those with ties to the West who have been used by Iran as bargaining chips in international negotiations.

Siamak Namazi, an Iranian-American who had been furloughed from prison while serving a 10-year sentence on internationally criticized spying charges, was recently sent back into Evin. His 85-year-old father, Baquer Namazi, was freed and allowed to leave the country.

In 2018, the prison was slapped with U.S. sanctions. “Prisoners held at Evin Prison are subject to brutal tactics inflicted by prison authorities, including sexual assaults, physical assaults and electric shock,” the U.S. Treasury Department wrote in a statement after announcing the sanctions in 2018.

Commercial strikes resumed Saturday in key cities across the Kurdish region, including Saqqez, Amini’s hometown and the birthplace of the protests, Bukan and Sanandaj.

The government has responded with a brutal crackdown, arresting activists and protest organizers, reprimanding Iranian celebrities for voicing support, even confiscating their passports, and using live ammunition, tear gas and sound bombs to disperse crowds, leading to deaths.

In a video widely distributed Saturday, plainclothes Basij, a paramilitary volunteer group, are seen forcing a woman into a car and firing bullets into the air amid a protest in Gohardasht, in northern Iran.

Widespread internet outages have also made it difficult for protesters to communicate with the outside world, while Iranian authorities have detained at least 40 journalists since the unrest began, according to the Committee to Protect Journalists.