Why false claims about Brazil’s election are spreading in far-right U.S. circles 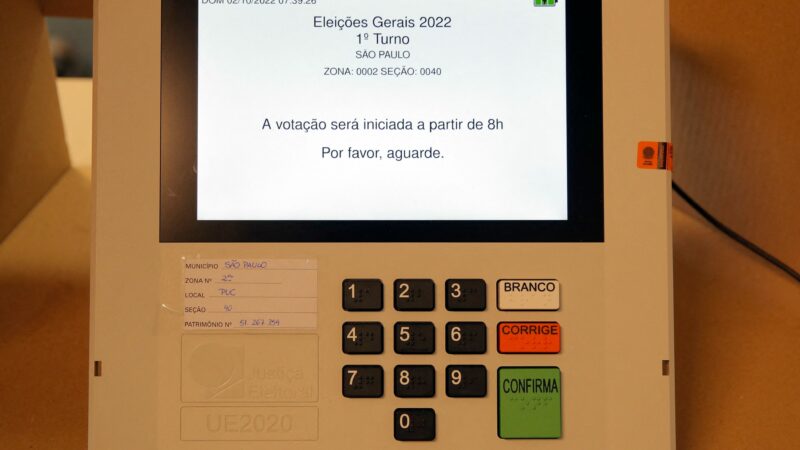 Baseless claims that voting machines made by Dominion Voting Systems and Smartmatic are being used to rig voting in Brazil are circulating online and in far-right media in the U.S. – even though neither company’s hardware or software is being used in the current election there.

It’s the latest example of how debunked election fraud narratives are going international. In many cases, the false claims about Brazil are being pushed in English to American audiences by right-wing influencers and conservative media sites who falsely assert that Donald Trump won the 2020 U.S. presidential election and appear to be planting the idea that similar fraud will occur in the upcoming midterms.

The deceptive narratives feature two companies that were targeted by American conspiracists, who falsely claimed their voting software was used to flip votes from Trump to Joe Biden in 2020.

Dominion and Smartmatic have filed multiple lawsuits against Trump supporters and right-wing media channels that advanced the falsehoods. But despite repeated debunkings, the companies’ names have become shorthand for election fraud.

“It shows just how sticky these narratives are,” said Lee Foster, senior vice president for analysis at Alethea Group, which helps companies detect and mitigate false and misleading claims.

“Once they gain traction in a particular place, like they did in the U.S. presidential election in 2020, people will start applying those [narratives] to other kinds of events and build out these broad conspiracy theories around them,” he said.

In the first round of Brazil’s presidential election on Oct. 2nd, leftist former President Luiz Inácio Lula da Silva finished ahead of the far-right incumbent President Jair Bolsonaro but failed to secure an outright majority. The two candidates are headed for a run-off on Oct. 30th.

Bolsonaro, who has spent months alleging Brazil’s elections are rigged and saying electronic voting machines can’t be trusted, performed better in the first round than polling had predicted. But that didn’t stop the former president from suggesting the results may have been manipulated.

“There’s always the possibility of something abnormal happening in a fully computerized system,” Bolsonaro said after the vote, according to the New York Times.

Online, commenters seized on well-worn conspiracy theories to cast doubt on the results. Alethea Group identified multiple false claims that Smartmatic and Dominion machines were used in Brazil’s election across mainstream social media sites including Twitter, Facebook and Reddit as well as alternative platforms popular on the right such as Truth Social and Gettr.

Brazil’s Superior Electoral Court, which oversees the nation’s elections, first debunked falsehoods that Smartmatic machines or software were being used in the country in 2020, shortly after the U.S. election, and updated that fact check this month. Independent fact checkers in Brazil also investigated the claim and found it false.

“The Brazilian ballot boxes were designed by civil servants and technicians at the service of of the Electoral Justice and are produced, under their direct coordination, by companies selected through public bidding and wide competition, which guarantees even more security and transparency to the electoral process,” the court said.

According to the court, Positivo Tecnologia, a Brazilian company, won the most recent bid to produce electronic voting machines for this year’s election.

Smartmatic and Dominion also confirmed their equipment is not being used in Brazil.

But the voting machine claims resurged this month, both in WhatsApp messages in Brazil about Smartmatic and in English-language posts on U.S. social media sites claiming, incorrectly, that Dominion or Smartmatic machines were used in Brazil.

Some pointed to Bolsonaro’s early lead as the votes were counted, which Lula overtook as more results came in.

“The election showed similarities with the last US election, such as overtaking the leader by leaps and bounds,” a Twitter account with more than 28,000 followers that describes itself as an independent international news agency posted on Oct 3rd. “Dominion was also used here,” the account falsely claimed.

Many posters used the allegations to cast doubt on the U.S. midterm elections.

“Midterms are looking great,” wrote one poster on pro-Trump message board Patriots.win. “What do we do when the midterms are stolen?” another replied.

The claims are “being used to seed that ground in terms of expectations of purported fraud occurring in the midterms,” Alethea Group’s Foster said.

The iterative nature of the falsehoods underscores how conspiracy theories need to continually build on themselves to reinforce and validate their claims.

“It becomes this kind of self-feedback loop. It just continues to grow, almost like a snowball effect,” Foster said.

The vote-rigging narratives were amplified by the far-right U.S. blog, The Gateway Pundit, which on the morning after the vote published an article alleging “MASSIVE fraud” in Brazil. That article and others from far-right websites cited claims by conservative activist Matthew Tyrmand that Smartmatic machines were used in Brazil.

Tyrmand has repeatedly shared allegations of election fraud in Brazil, without evidence, to tens of thousands of followers on Twitter and Gettr, the social media site founded by former Trump aide Jason Miller.

He also frequently appears as a guest on former Trump adviser Stephen Bannon’s “War Room” podcast, where in recent weeks they’ve discussed the Brazilian election and drawn parallels with false claims of fraud in the U.S. in 2020. (Bannon was sentenced to four months in prison on Friday for refusing to comply with a subpoena request from the congressional committee investigating the Jan. 6, 2021 attack on the U.S. Capitol by Trump supporters).

The day after Brazilians voted in the first round, Bannon described the election as “a very stark warning to MAGA and to all the Republicans of the games that are being played in these elections.”

“People are absolutely crying fraud in Brazil because it’s the same thing we saw in 2020,” Tyrmand said on the same episode, repeating false allegations that Smartmatic machines were used and echoing a frequent assertion from Bolsonaro that Brazil’s electronic voting system is “non-auditable.”

Bannon, who along with other Trump allies has developed close ties with Bolsonaro’s family, has long pushed the idea of election fraud in Brazil.

It fits with Bannon’s “larger worldview” of a “leftist conspiracy to steal the government from the right wing through illegitimate and fraudulent means” in elections around the world, said Madeline Peltz, director of rapid response at the liberal group Media Matters for America.

He’s been calling for his audience to take over local Republican precincts and get involved as poll watchers and election workers.

“Diving into the Brazilian election to keep these election lies alive in the States is really a natural extension of the political projects that Bannon has going in the States right now,” Peltz said.

Brazil is not the only place where U.S.-centric hoaxes about voting machines have crossed borders.

Ahead of Australia’s federal election earlier this year, false rumors spread on social media that the country would use voting machines made by Dominion.

Tom Rogers, Australia’s Electoral Commissioner, said the claims lacked any basis in reality, given that Australians do not use electronic voting machines.

“I have the pleasure of being the CEO of one of the world’s last great analog events, where people use paper and pencil to vote,” he said. “So if you’re going to pick a conspiracy theory, you’d think you’d pick one that maybe had more traction.”

The Electoral Commission moved quickly to debunk the rumors, posting YouTube videos, replying to people on Twitter, and adding the claim to a running “disinformation register” on its website.

Rogers credits that aggressive, rapid response with preventing the claims from gaining much ground.

“It’s not that elections are necessarily globally doing anything worse than they always were,” he said. “It’s the collapse in the reputation of those systems, as a result of misinformation, disinformation, conspiracy theories.”