‘Where is humanity?’ ask the helpless doctors of Ethiopia’s embattled Tigray region 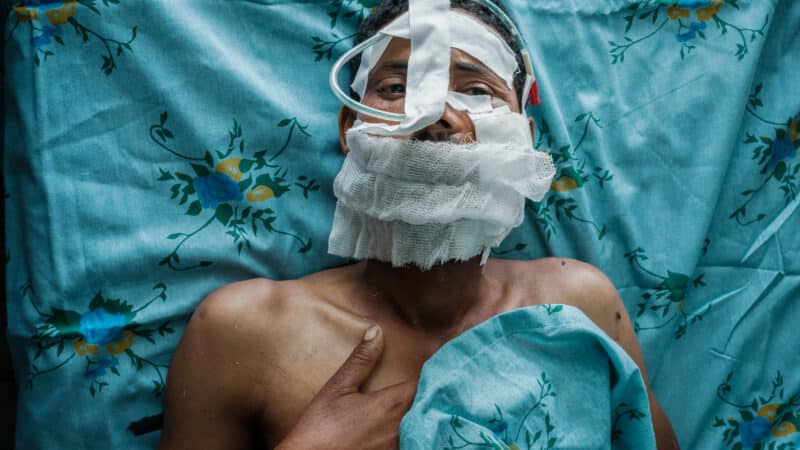 One of the greatest casualties of the brutal civil war in Ethiopia has been its health care. With the country’s northern Tigray region under blockade and cut off from most communications, a disastrous humanitarian crisis has been unfolding in a war that has become the world’s unseen war.

Dr. Fasika Amdeslasie, a surgeon at Tigray’s Ayder Comprehensive Specialized Hospital, says, “Our patients are not getting basic medicines like antibiotics, IV fluids, [and] oxygen.” Without these kinds of supplies, he’s watched patients die.

“Seeing the hopelessness in their eyes,” he says, “and being the one to tell them that you cannot help them, that they are going to die soon, as a firsthand witness as a physician is very heartbreaking.”

“You cannot do anything for them and you tell them to pray,” adds Fasika, who was dean of Mekele University’s medical school before the war. (Per the Ethiopian custom, we are using first names for subsequent references.)

“This conflict has truly decimated the health system,” says Lindsey Green, a senior program officer who researches sexual violence and other human rights violations at Physicians for Human Rights (PHR).

The violent war between the Tigray People’s Liberation Front — the party that controls Ethiopia’s northern Tigray region, and the Ethiopian government forces and their allies, including neighboring Eritrea, has been raging for almost two years. It’s a power struggle fraught with ethnic tensions. Both sides blame the other for starting the conflict, which has claimed up to 600,000 lives, displaced millions and caused rampant starvation and poverty, according to researchers at Ghent University in Belgium.

A September U.N. report has faulted all sides for what it believes to be “violations [that] amount to war crimes and crimes against humanity,” including extrajudicial killings [where an official kills someone without legal process], rape, sexual violence and starvation of civilians.

A medical system that’s been decimated

For years, the medical system in Tigray was a capable network of urban and rural facilities servicing nearly 7 million people. But now, according to the Tigray Health Bureau, more than 80% of its hospitals have been destroyed or damaged. Rural clinics and health facilities are mostly non-operational.

“They took away ambulances, they dismantled solar panels,” says Dr. Kibrom Gebreselassie, a surgeon and chief executive director at Ayder Hospital in Mekele, the capital of Tigray. “And they dispersed all the drugs to the ground, crushing it under the tire[s] of their military vehicle. No one dared to stop them.”

Medical workers, who are primarily government employees, haven’t been paid in months. Doctors have no choice but to wash and reuse gloves (occasionally resorting to plastic bags instead), distribute expired medications, halt elective surgeries and turn away cancer patients — including children — due to lack of chemotherapy.

“To tell a patient that they have cancer is tantamount to telling them, ‘You are going to die soon,'” says Kibrom. In addition, “diseases which we have controlled before start to flare up again. This includes anthrax, rabies, measles in children and leishmaniasis, to mention just a few.”

People with chronic conditions have been especially hard hit. Birhan Hailu of Mekele, 52, who has type 2 diabetes, says: “My main job now is worrying about my disease because I have children. I may die. No one will take care of them.”

Insulin is hard to come by. Birhan has borrowed some from her neighbor but often goes without. “Even our physicians [and] nurses are crying in front of us because they don’t have something to give,” she says in tears.

One of those nurses is 35-year-old Atsede Giday, who works at Ayder Hospital, where about 5,000 diabetes patients were treated before the war. Prolonged lack of care is extremely dangerous. “I’m feeling in these weeks,” she says, “I will lose many patients.”

Without reliable access to food, money and transportation, Kibrom says “patients were left to die in their houses.” Mothers have had to give birth at home.

And since it is difficult to get to health centers, treatment “outcomes are much poorer” for those wounded by the fighting and bombing, says Green.

An emergency physician, Dr. Daniel Weldu, formerly at Ayder Hospital, put it this way: “I wouldn’t want my beloved or my relatives to be treated [at my emergency department] because I know the limitations are so severe.”

PHR has also flagged the widespread sexual violence in Tigray and elsewhere in Ethiopia as a deeply troubling part of the war. “If [victims] are able to go to a health facility to try to seek care and services after this violence,” Green says, “they are often met with not only a lack of ability to receive physical care but also long-term impacts on fertility and other sexual reproductive health outcomes.” And there are few psychological services available to help people heal from the trauma of sexual violence.

“If you ask me if the health system was targeted … definitely, yes,” says Hailay Abrha Gesesew, an epidemiologist at Torrens University Australia who is originally from Tigray. He laments that many deaths are and were preventable. What’s needed, he argues, is “a humanitarian corridor to deliver basic supplies to Tigray — medicine, food and fertilizer.” But a temporary ceasefire in March of this year to allow humanitarian aid into Tigray didn’t achieve much before fizzling in August as fighting resumed. Subsequent attempts to organize peace talks have faltered.

Tedros Adhanom Ghebreyesus, director-general of the World Health Organization, ran Tigray’s Regional Health Bureau from 2001-2003 and became Ethiopia’s Minister of Health in 2005. In these positions, he instituted many of the reforms and policies that shored up the country’s health system, now lying in pieces. For months, he’s spoken about the current situation at WHO’s regular press briefings. In August, he said, “Nowhere on Earth, 6 million people are sealed off … from basic services, from their own money, from telecom, from food, from medicine. Maybe the reason is the color of the skin of the people in Tigray.”

A fear of giving birth in the dark

One of the few spots where medical services are meagerly available is in Mekele. But things are dire. Several months ago, one woman found herself nearing the end of her third pregnancy. This time was different, however. Power across Mekele was intermittent at best, including at Ayder Hospital, where she was scheduled to give birth.

“Most of the time, it was running out of light and it had not enough fuel for the generator to be turned on,” she says.

This woman was afraid she’d end up delivering in the middle of the night — in the dark. A physician herself, she asked that her name not be used for her own safety and because she fears her family elsewhere in Ethiopia may be interrogated or arrested.

With her two previous births, she’d experienced postpartum hemorrhaging. “If anything happens, like complication,” she says, “it would be difficult to treat because they cannot see where I’m bleeding from.”

Not to mention the challenge of the routine visual scan of the newborn. “To see a child, how his color is, is he breathing or not at night? It’s difficult when the light is off,” she says.

As her due date grew closer, and there was routinely no power at night, she did the only thing she could think of. She charged her solar-powered flashlight in the sun each day.

Then, this past June, at 5 in the morning, she gave birth to a baby boy. Fortunately, she didn’t hemorrhage. And she didn’t end up needing her solar-powered flashlight. The power, remarkably, stayed on. Subsequently, her son got his polio and tuberculosis vaccines, but none of the other routine immunizations were available.

“It’s difficult to have a new baby without vaccines and without all the things that he might need,” she says. “But I feel blessed actually. It’s a blessing to have a baby. So I’m happy. I don’t regret that.”

Not every newborn is so fortunate. Many routinely die of hypothermia without the power needed for warming lights, says Kibrom.

And not just infants are impacted by a lack of electricity. “Fuel is the backbone of our hospital,” he adds. “Without fuel, every corner of the hospital is dark. All machines stop functioning.” Health care providers working with intubated patients who would normally switch on a ventilator to help them breathe have, during power outages, done it manually. “The whole night, a nurse or someone has to sit on the side of the patient,” Kibrom says. “And the next day, another nurse or another health care professional will replace them.”

Fasika is pretty sure that Ayder Hospital is the only place in Tigray currently conducting any kind of surgery. Elsewhere, “they are stopped because there is no supply, there is no electricity and there is no fuel,” he says.

At the hospital, when surgery is absolutely essential, Fasika and his colleagues do their best (and even then, there can be long delays). Without saline solution to wash the skin before a procedure, they’ve added table salt to water that they then boil and cool. Sometimes, when the power has gone out, they’ve waited in the dark for hours to resume the surgery until the lights come back on.

Administering anesthesia is especially troublesome, especially when the drugs have expired. There’ve been times, for instance, when “the patients awakened and struggled [during] surgery because the drug was not working,” says Fasika. Other times, patients have taken “a long time to wake up.” Under these conditions, he can’t help but feel that he’s doing “basically medieval surgery.”

In these moments, he admits to wishing he’d chosen a different career track — “a chauffeur or garage or office worker,” anything that wouldn’t require working in the hospital.

Kibrom says his job has become more challenging as well. “It’s difficult to lead a hospital in a conflict area under siege with no budget for operational activities,” he says. “It is human misery, unprecedented calamity. We call for help. We plead for the world to help us. But the silence is deafening. We sometimes ask, ‘Where is humanity?'”