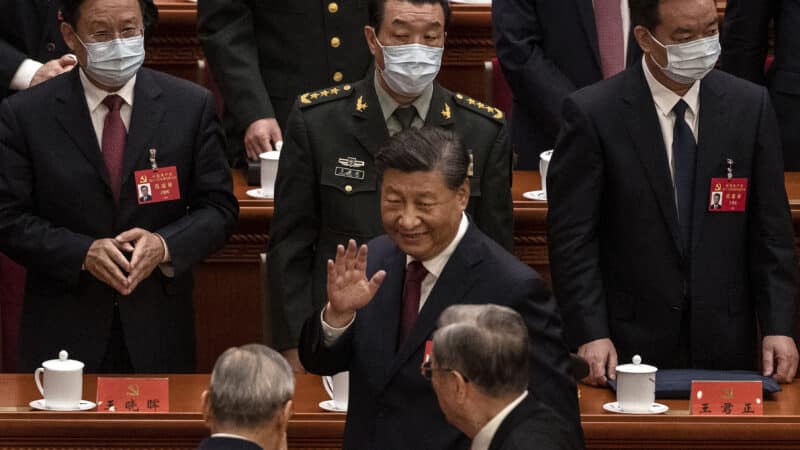 Xi Jinping has become China’s most powerful leader since Mao Zedong and is expected to be handed a norm-breaking third term this week. NPR has been speaking with a broad range of people from China about the impact of his decade in power. Here is what four of them had to say.

BEIJING — Ten years ago, with more than 2,000 delegates in front of him, Xi Jinping smiled graciously when he took the helm of the most populous nation on the planet and the world’s second-largest economy.

He had risen through the Communist Party ranks and even served as vice president. Yet few understood his ambition or knew what to expect.

One person paying close attention was a scholar named Ilham Tohti. Initially, he was apparently happy to see Xi elevated to the top role of the party’s general secretary.

“He sounded so excited. He’s like, ‘I think it’s going to change now. Things are going to get better,'” says the scholar’s daughter, Jewher Ilham, who lives in the United States.

But the past decade in China has been marked by new levels of authoritarianism — and nowhere has it been clearer than in the country’s western region of Xinjiang.

Ilham Tohti, 53 this month, is a member of the Uyghur ethnic group, which calls Xinjiang home. He made a name for himself as an outspoken activist for Uyghur rights and the Uyghur language and culture.

He was arrested in January 2014 and later that year sentenced to life in prison for “separatism.”

It was an early salvo in Xi’s unprecedented crackdown on Uyghurs and other Muslim minorities in the name of fighting terrorism and separatism.

By some estimates, a million or more people would eventually be detained. The U.S. has called it genocide. The United Nations’ top human rights official said in a recent report that abuses in Xinjiang may have amounted to crimes against humanity. China denies any wrongdoing.

But the sweeping crackdown was clear indication that Xi was a different kind of leader.

Few outside the party’s secretive elite know exactly how or why Xi was installed as party boss a decade ago.

It was a time, though, when many felt the party was in peril, riddled with corruption, and at risk of losing its moral authority. Xi’s task, according to a common narrative, was to clean things up and reassert the Communist Party’s dominance across the board.

He has embraced the mission. But one of the biggest challenges he faced was unexpected: the 2019 outbreak of a deadly coronavirus.

In a yoga class in Shanghai, an instructor with a ponytail and tattoos runs his students through a series of movements.

He goes by the name Vis. He did not want to use his full name to avoid trouble from the authorities for speaking freely to a journalist.

Earlier this year, he was stuck at home, his business dried up and his anger boiling over.

“We were locked in for four months in total. It was the longest [lockdown] in Shanghai,” he says.

China has faced the coronavirus pandemic with an unflinching “zero COVID” policy that Xi has thrown his weight firmly behind. To him, the low death toll and case count is evidence that his country’s political system is superior to those in the West, where the virus has killed millions of people.

But it comes with a cost. The impact on the economy has been huge, with heightened uncertainty smothering consumer confidence and rendering business planning all but impossible.

And the effect of lockdowns has been brutal on many people.

“We were helpless and also felt like crying,” says Vis, talking about the last lockdown.

Vis and his neighbors — who were effectively imprisoned in their compound — drafted a statement of protest. He recorded it and they played it in public for all to hear.

For that, he was detained by the police for 11 days. Vis makes a point of saying he is not political and he does not blame anyone.

The lockdown started in early spring. Since it was lifted in June, Vis has pieced his yoga business back together for the most part. But he says it left a scar on everyone.

“If it happened once, it could happen a second time,” Vis says. “In China there’s a saying: If you’re bitten by a snake, you’ll be afraid of coiled rope for a decade.”

It is hard to gauge public opinion in China. Independent polling on politics is banned, and speaking out against the Communist Party can get you thrown in jail. But many people do say they genuinely like Xi and think he is doing a fine job leading the country.

“Xi Jinping is a good man,” says Lao Zhang, whom NPR met by a lake in a Beijing park. “I think he’s honest and upright.”

A retired factory worker, Zhang, 72, has seen a lot of change in China over his lifetime.

During the 1966-76 Cultural Revolution, Zhang was sent to the northwestern Chinese countryside to work not far from the area where Xi toiled as a youth in that turbulent era. Zhang says he’s known about Xi since then — and liked his style.

Zhang believes Xi understands the plight of the country’s poor because of his experience in the Cultural Revolution, and has been able to take action that his predecessors could not because he is what is known as a “princeling” — the child of revolutionaries. Xi’s father, Xi Zhongxun, was a guerrilla fighter in the civil war and later a vice premier.

He applauds Xi for boldly addressing what he says are China’s most pressing problems — corruption, poverty and inequality.

And he praises Xi for unapologetically standing up for China on the international stage.

“We want him to stay in office and have at least one more term,” says Zhang. Barring the unforeseen, he seems likely to get his wish.

He imposes the law on Hong Kong

Critics, however, say Xi has overplayed his hand and that his toughness is creating more problems for China in the long run than it is solving.

The situation in Hong Kong is an example. The former British colony had a vibrant pro-democracy movement, an active civil society, and the people enjoyed freedom of speech.

In 2014, street protests erupted in the city in what became known as the “Umbrella Movement” — openly calling for the right to directly elect the city’s leaders.

One of those involved in the weeks-long demonstrations was Chung Ching Kwong, who was 16 years old at the time.

“They’re banning us from having universal suffrage, so we’re going to protest because that should be a fundamental right,” Kwong says.

Five years later, a proposed extradition law sparked fresh demonstrations. Kwong — who was getting her master’s degree in Germany — flew home to join them.

The protests were often huge, involving hundreds of thousands of people, and sometimes violent.

In 2020, Beijing took a step that would change everything — imposing a sweeping National Security Law on Hong Kong. The arrests that followed decimated Hong Kong’s democracy movement.

Xi has not blinked. At the opening session of the party congress in Beijing on Sunday, he said the “one country, two systems” model for running Hong Kong is a “great innovation” and that China has successfully overcome “grave challenges to its national security” in the territory.

Under the agreement that led to Britain’s return of Hong Kong to China in 1997, the territory was promised that it would be able to maintain its system and manage its own affairs with a “high degree of autonomy.” Critics say China has reneged on that promise.

For Kwong, and others, China’s security law has meant the end of a way of life — and exile.

“Basically, my life has, like, gone to pieces because of Xi Jinping,” she said. “I lost my home. I lost a lot of my friends. And I’ll never set foot in Hong Kong again.”

These were just four people with four very different experiences under Xi. But in a country of 1.4 billion people, it is impossible to capture the national mood.

The Communist Party made a wager 10 years ago — that a tougher leader with an unapologetic approach was necessary to keep the party in power and make China stronger.

This week it will be doubling down on that bet.